You are here: Home » Featured » The darkness I carry : Part 1

The darkness I carry : Part 1

One misty morning. Opposite the bus stand at Kumali, right inside a restaurant this writer was hogging unnecessary attention from local people. Let them stare. But I couldn’t join them in the Kumalian breakfast bonhomie – porotta and egg curry.

Instead I gobbled down dosa and chutney.

I didn’t bother them staring as long as this beautiful woman opposite me in red churidar picked at her soft porottas dunked in yellow egg-curry.

She was in no hurry. I too.

I appreciated her audacity in choosing this chair against me leaving all those empty tables lying haphazard in the restaurant. People with empty chairs opposite them seethed in private.

What would happen if the bearer slapped the price of her porottas and egg curry on my bill, taking her as my wife! I might smile and correct him by saying, ‘chetta we are separate.’ Then, probably our eyes would meet only to laugh together at the folly of the bearer, at the folly of the world around us. I might then ask her where she was going in such a misty morning. I should then tell her that I am a writer, traveler and teacher all rolled into one. She might smile at that.

A dirty scrap of a bill was thrust into my dream from outside. “Plain Roast – Rs 25/-” I stared on it blankly.
“What?”
“What?” I echoed back his question never quite shaken off the leftover frills of a dream still clung to me.
“Anything wrong with the bill, sir?”
I shook my head, got up, washed my hands, settled the bill and walked out of the restaurant mechanically.

“How much for a trip to Ramakkalmedu? You must also take me to Pandikkuzhy on the way,” I asked a jeep driver. I had already decided not to lug around my full-blown cloth bags anymore in a private bus. Rs 1400/- was steep. I deliberated over the rate still regarding the ebony-skinned driver, young but hefty and a bit lethargic, sprawling on his driver’s seat.

He seemed too disinterested in taking me. So I got in, still grumbling over the fare. 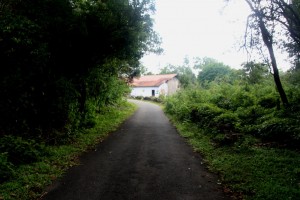 The jeep juddered into action with a quick flip of the key. The morning dew and last night’s drizzle were  dripping from the trees on the roadside. I saw the dampness drying on the foliage as minutes passed. In an hour, the horns of motors on the Kumali-Munnar route blew down along the long road sweeping aside the last vestiges of a serene morning from where I began.

“Is this your jeep?” He shook his head.
“What is your name?”
“Murugan.”
“Where do you live in Tamilnadu?”
“I am a malayalee. I come from Kollankode. Palakkad.”
I looked at him. “But you have a tamil accent.”
“Everybody in Kumali has, sir. This is a border town. We deal with people from both the states,” he smiled. I saw a radiance straining through his dark cheeks.

Murugan answered to my questions in umms and ngaas, and recoiled back to silence, the moment I gave him a gap.

“You have your parents with you?”
“Long dead,” he shifted the gear and began to negotiate a steep incline on the road.
“They died when I was 8 years old.”
“Then…”
“I had a distant uncle who was in the police. He took me here to Kumali. Then he also died,” He said glancing at the rear view mirror. He signaled a closely following car to move ahead to overtake our vehicle.

Now he turned the jeep sharp right to an untarred path, which now rose ahead of us.

“How did you manage after your uncle’s death?”

“Well, I did all sorts of odd things. I had to go to the forests to pick firewood for my neighbours. Then I worked in a jeep as a cleaner. And do you know one thing?” he turned his head towards me and smiled. “I studied until eighth standard with the help of my neighbours.” I smiled back. I saw tufts of pride hung about his eyes as he announced that.

The road began to climb steeply now. Farther on it deteriorated, and crumbled to loose shale and dripping voids. I saw compound walls made of shoe flower 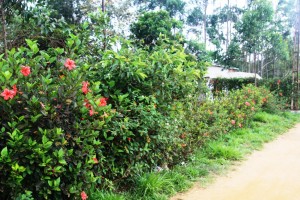 plants along the roadside.

“Then I asked the owner of my jeep to help me become a driver. Soon I became one. I had to take goods across the border. For that they gave me enough to live.”

“What sort of goods?”

“All sorts of goods,” he smiled and said to himself, “everything.”

Then his face grew a bit grim, “But it was then I fell in love with my girl – Shelja. She is not like me, but fair. She knew I had no one else in this world. I tried to dissuade her as her brothers were my friends,” He took a deep breath and shifted the gear.

“But nobody can do anything about fate. Sir, I was only seventeen and had no one in the world to help me. And she was an unmarried muslim girl,” he turned his head to see whether the gravity of the situation had sunk in me. I nodded.

“One morning I woke up to see her standing beside my bed. She came with a small bag, and asked me to marry her right then.” 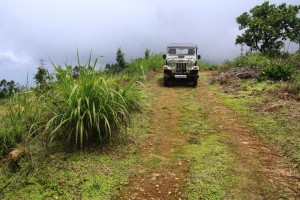 The seventeen year old boy was dumbstruck for a moment, but then he calmly took her bag, set her on his jeep, and crossed the Kerala-Tamilnadu border. “I tied the knot in a temple in Tamilnadu.”

Both the husband and wife knew the feast waiting for them back at Kumali.

“Shelja’s relatives gave me two choices – either to convert to her religion or to suffer. I was offered a fortune, if I complied with their first demand.”

Murugan pulled the jeep to the roadside. “Sir, this is Pandikkuzhy.”

Manu has written 297 stories in Rum, Road & Ravings. You can read all posts by Manu here.
by Manu |
1 Comment |
Featured, The roads less travelled

One Response to The darkness I carry : Part 1