You are here: Home » Featured » The Darkness I carry: Part II

The Darkness I carry: Part II

I was impatient to hear the rest of the story, but I was also butt-sore sitting long in the jeep. I stretched my back and was soon sucked into the mesmerizing  ambience around me thrumming with crisp mountain air. 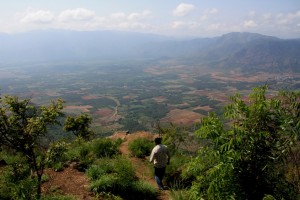 Take it from me; all the privations to reach Pandikkuzhy will pale into insignificance against the magnificent scenery unfolding before your eyes as you stand on the cliff.

I thought  I was seeing the whole of Tamilnadu on a map. I walked carefully to the edge of a tapering rocky outcrop to hover over rice fields which lay like matchboxes deep under.

Murugan pointed towards what looked like sheep huddled together at the sight of a wolf at a distance. “Theni town.” We looked each other and smiled.

Theni looked amazing from this distance, but I knew a town is only good to relish it from a distance. Up close all cities will come apart into meanness, attitudes, pettiness, indifference.

Farther on, I saw many other towns too but they quavered with the slightest wind that disturbed the miasma of smog huddling over them. There were mountains which dramatically rose from the ground, but midway they forgot why they had begun, lost their steam and dropped off before they reached me on my level.

I trembled as I tried to use the camera. The moment I shut one of my eyes to take the pic, the thin edge of the rocky outcrop under me began to move. I felt like falling on to the chessboard of green fields deep below. I stooped to clutch a rock for balance and pulled out my mobile with the other hand to post my update on facebook.

“Don’t poke me. I stand on the edge of the world.” I read it again and smiled at my ingenuity. Then I recognized I read it somewhere.

I handed my camera to Murugan and asked him to take my pics. 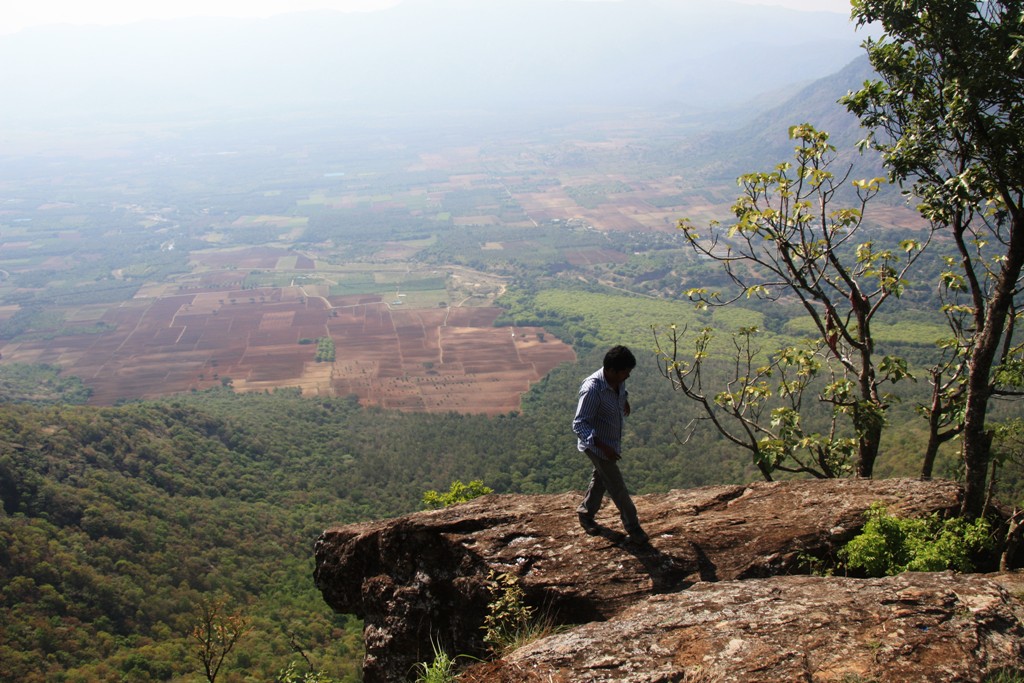 “What did you choose then, Murugan? You agreed to convert?” I asked him as soon as we got back into the jeep.

Murugan did not reply until he got the vehicle back on the road. He had to press the horn so hard that the cows finally gave up staring, lumbered off, leaving the road once again open to traffic.

“How could I sir? I don’t think my religion is superior to theirs. We all are equal. But sir, I was brought to my gods by my parents. If I leave them, the vague memories of my childhood and my parents will also fade with them. So I told them I could not,” Murugan said, never taking his eyes from the road. I could see him reliving the moments.

“But I am sad, that my friends, her brothers misunderstood me. It was she who wanted it so soon.” Shelja’s brothers left Murugan and their sister on their own, fuming, but so sure that, he had in him everything to self-destruct.

Instead Murugan worked hard. He began to take too many risks in his life with the jeep for a girl he had to protect. “I started taking long trips even if I was approached by strangers at night.”

Stories were rife about jeep drivers being found murdered after they were hired during nights. “But I had no choice. I could stand anything, but the taunts of my old friends. How can I convince them that I really wanted to marry her with their consent?”

When I saw him, Murugan was still struggling in his life.

“It needs a lot of money to live. We don’t have any children, sir. So I have to take my wife to a doctor in Tamilnadu every month. Whenever we go, we used to watch some Tamil movie, enjoy our time in carnivals and come back late night. That is the only time I am happy. She loves me a lot, poor girl. Only she knows me. Everyone else misunderstands me. Even my uncle, my neighbours, my friends…may be because of my dark complexion. But my wife is fair,” Murugan smiled again, now looking at me.

“We buy vegetables and provisions from Tamilnadu. It is very cheap. I buy Vijaya rice, sir. You won’t feel hungry for a long time after you have it, sir.”

Hot noon. I had drunk so much by now that I became a sloshing carton of mineral water. On my right side, the road fell away into a deep gorge. Beyond which I saw the landscape yielding up its pigments, moment by moment to the brutal sunshine dispersed my haze.

We reached Ramakkalmedu by late afternoon. Murugan left me at Windhavens resort, said good bye and went back to his home, to his Shelja who was waiting.

Meanwhile at Windhavens I realized a small mistake I made. It was some other resort where I had reserved my room. I apologized and hired an auto to get to my destination, 3 kms away. I was dead tired and had already started dreaming  about a cot under a whirring fan.

But when the manager of the resort greeted me, I felt a sudden sinking feeling in my stomach. I stopped mid-sentence as I began to brag about my journey.
“Any problem, sir?”
I slumped on my chair. “My…my camera. I put it away on the side of my seat. Yes it is in the jeep.”

With a trembling hand I crunched the number of Murugan on my phone. He was busy. I tried again and again. Suddenly I found that he switched his mobile off. I felt the ground giving away under my feet. An SLR camera. My journey had gone waste. All the pictures were in it. What should I do now?

Murugan could not miss it by any chance. I put it between us, I remembered. Dark thoughts began to pluck at my mind. He would sell it for money. He would do anything for money. He had cheated his friends. He married a girl when she was a minor. He was a smuggler.

I clearly remembered now the moments when our eyes met and how he pulled back his in fear. I failed to pick the signals. It was all over his face. His dark face. 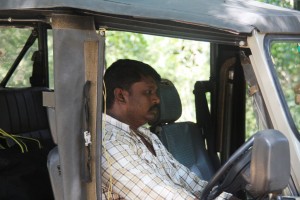 Hell! I should not have trusted him.

I cursed myself. He had the look of a thief. Yes, a dark thief. I began to curse him. No, he won’t get anywhere in his life. At one moment of utter despair, I even cursed that something should happen to his vehicle on the way. I was seething with anger. All those pleasant feelings of traveling with Murugan were now flushed down the sewage pipe of my mind.

Instead of a jeep, an auto rickshaw came.

“Is this your camera?” I looked long into my camera, the autodriver was awkwardly holding. “Where did you get this?”

“You left it at Windhavens resort. Our Madam wants me to take it to you.” I could not speak for a few moments. I blinked back my tears as I took my camera.

Manu has written 297 stories in Rum, Road & Ravings. You can read all posts by Manu here.
by Manu |
1 Comment |
Featured, The roads less travelled

One Response to The Darkness I carry: Part II