You are here: Home » General » Esperienza Exotique » The Blood trees of Socotra

The Blood trees of Socotra

(Esperienza Exotique is a column on exotic experiences waiting for us in different parts of the world. We will walk the earth, hop on to a train, a cruise or a car to find the best, the most precious and the most valuable in the world. It can be an orange, a perfume, a trek or a cruise. It can be a city, a pub, a bus stand or a doll. This series is here to enlighten and entertain you).

My readers deserve something special. Fancy a trip to one of the most exotic places in the world?

Come, let us pull our vehicles to the roadside, leave them right there for a few months on the pretext of oil price hike and jump into a cargo boat for a long voyage across the ocean. Once we reach, I will ask you to etch a tree over there, deep in your mind as you might see trees like it again only in hell or heaven.

The gentle waves of the sea beat against the sides of the cargo boat, tossing it relentlessly. Sleep tight. I will wake you up into an eccentric dream, a parallel universe, an island tucked halfway in between fact and fiction in the Arabian sea. 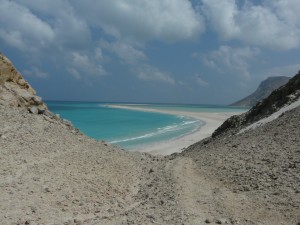 The name of the land is Socotra.

Situated 250 miles off the coast of Yemen, Socotra is the largest island of an archipelago. From sea you can make out the granite Mountains, limestone cliffs and red sandstone plateaus beckoning you with their strange spectacles.

Squint your eyes, the island looks like the tablelands of Arizona surrounded by turquoise blue water. Up close it speaks more like the Galapagos island with its endemic flora and fauna. But unlike the Galapagos, Socotra is inhabited.

The local people earn their bread through fishing and herding. Tourism is intentionally left to simmer at a crude level to discourage you and me from frequenting their home, chucking our waste, and spoiling their nature.

No beachfront international resorts, no posh pubs. Socotra is a virgin girl who shies away from our urbane manners and suave advances.

From the capital Hadibo, the walk under a merciless sun to the mountains has gold coins strewn throughout the path. Remember, we are here to see Dracaena Cinnabari, or the dragon’s blood trees perched high up on its craggy tops. 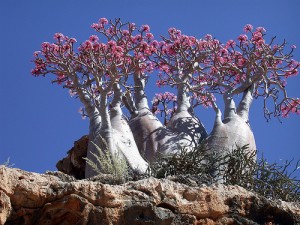 It is a rare type of tree which can be spotted only in th Soctotran archipelago of four islands. Its sap, cinnabar was used as a dye and also as medicine to treat respiratory and gastrointestinal problems.

But that was hardly the reason why it was famous for.

The hike to the mountians can never be swift. Many strange plants and trees engage us on the way. See the weird bottle-shaped cucumber trees. Meet the Socotran desert rose. Socrata with its unique ecosystem has a third of its plant life unique to the land. You will never see these wonders of nature anywhere else in the planet and also on this side of your life.

Now, stop. Screen your eyes from the blinding sun. Can you see a few trees in the shape of inside-out umbrellas silhouetted against the bright sky on the mountainside? They are the dragon’s blood trees, Socotra’s most famous inhabitants.

If the name of the tree hasn’t instilled a tinge of spookiness in your mind, believe me, its bizarre shape will, especially against this isolated expanse, and the myths surrounding the tree can rush in straight for the jugular. 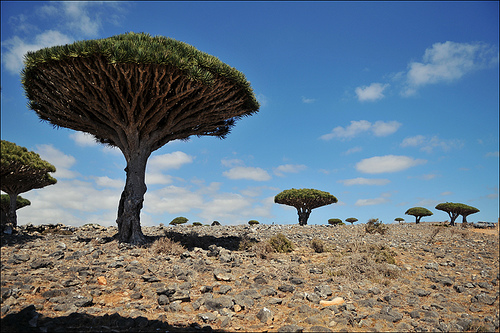 Cut the trunk, the dragon’s blood tree oozes a red sap. It is the dried blood of dragon, people once believed. They used it in witchcraft and alchemy in medieval times. It was also a favourite in Caribbean voodoo. The red sap was used to increase the potency of neopagan witchcraft spells for protection, love, banishing, and sexuality.

Blood and trees. My mind wavers.

I recall a tree I saw in Chinnar forest (Idukki) some years back during a jungle trek. My tribal guide told me that a man can go blind if its sap falls in the eyes. But there is a remedy. The only way for him to save his sight is to bite his arms, and let a few drops of blood drip into his eyes.

How seamlessly man weaves strange myths and breathtaking tales around the uncanny spectacles that put him in awe!

When the vision clears we see ourselves back in the ocean still in search of the mysterious island, Socotra. Alas! This is the month of June; our whole voyage is pointless. Socotra, with all its wonderful plants and trees will remain cut off completely from the rest of the world during the monsoon season. From May to September.

Just before we came, the island has slipped out of its moorings and vanished behind a film of powdery water. With a host of trees which drip blood at the slightest dab on their bark.

3 Responses to The Blood trees of Socotra