You are here: Home » Featured » My Brother put out the Fire in me.

My Brother put out the Fire in me.

I was all set to be a true-blue arsonist, a rowdy-anarchist, someone Donald Trump would be proud of today.

But before you start to play with fire, you need to test it out. First on yourself. Then on friends. On negligent neighbourhood. On innocent bystanders. On siblings. On teachers, if you get them handy and still teaching. Well, I started it with myself gloriously by sitting the blaze out when I was only four months old. You heard it right. Just  a 4 month old baby I was.

This happened long long ago. 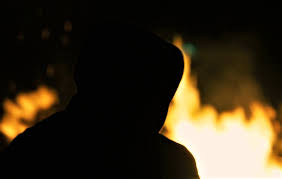 The nanny my folks entrusted their baby to as they left for work was a lazy type, a perfect background for an experimentalist arsonist-baby crawling around for trouble in a home, any home.

So the moment my mother left, our maid, my nanny would stretch herself on her customary mat for a super-lengthy sleep, leaving me to mind myself. Go to hell, she muttered between snores. I was also relieved, for I had now all the time in the world for all kinds of mischief.

I used to crawl around my home for some unimpeded exploration, upsetting whatever came my way. And during my long stint in the kitchen,  I might have drunk kerosene when I got thirsty, consumed paramar when hungry, and also ant-repellents, mothballs, stunned rats, shocked lizards, traumatized cockroaches, flabbergasted snakes and god-knows-what, but you must notice I emerged out of each one of them singlehandedly and more and more strongly to take on my wife’s cakes much later in life.

But one morning, two minutes into the kitchen, I didn’t get me raising hell, sending subsonic, supersonic screams traumatizing the whole neighbourhood.

What happened, I asked myself to clam up all embarrassed. For heaven’s sake, Stop!!! I cried to stop my cry. I couldn’t and didn’t.  A four-month-old baby at any age doesn’t want the ignominy of its nanny and the neighbourhood catching it with a wriggling antenna of a cockroach still dangling from its mouth. What went wrong, I thought back, sucking in the remains.

I remembered seeing a few red crystals lying on the kitchen floor as I crawled in. Those days, I had this habit of testing the texture and temperature of everything animate and inanimate with my bums. I sat on things to divine them out. If hands could do it why can’t the rear, I reasoned! So I took this portable instrument of mine to wherever I crawled until that fateful day it met its nemesis. I knew a few crystals wouldn’t provide enough estate to deposit a four-month-old rear. Still I perched on them. It was then I heard the voice of someone pouring batter on to the dosa pan. Amma, I turned around crying, only to remember she was still in the office. No dosa. No amma. It was then I realized the sizzling voice I heard came from under my seat. 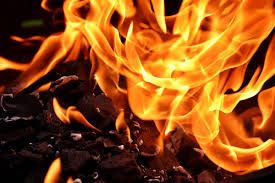 Poor kid, I had little idea the crystals were smouldering embers our maid had strewn on the kitchen floor as an offence against ants. For the latter, the intrusion of bums was a welcome arrival after all the daily conflagrations.

Imagine, when you are only four months old, left in the care of a dozing maid, with your parents away, and your bums sizzling, you wouldn’t possibly know how to respond, how to route yourself out from the pyre you yourself had most stupidly laid your bums on. So I sat more firmly on the fiery remnants of wood, caterwauling instead of solemnly crawling out, until I took out all their firepower.

That was the beginning of my stint with fire. But the end came too soon.

Seven years later I was sitting at the foot of an easy chair where my brother was cosily reclining on.

I looked. He was all engrossed in a book. And I was seven. And I was bored. And I had a matchbox in my hand. And a strand of thread dangling from the hem of the lungi my brother was wearing caught my undivided attention.

A single thread rocking in the breeze. From his lungi. Hell, I looked away. My brother was still engrossed in the book. I was bored. I tried my best to look away. But I am only seven years old. They wouldn’t hang me!

When I turned back to my brother, the long thread had by now acquired a little curve at the end and was swaying more profusely in my direction, beckoning me with that crooked finger in the most luring manner. I tried to look away for one last time. The one at the other end of the thread is not a firecracker, I told myself, it is your brother. But the matchbox I had been nervously turning around in my hand got warmer and warmer in my tiny little hands. See. My brother was still engrossed in the book. I was bored. I was only seven. I had all the excuse. You can survive this. 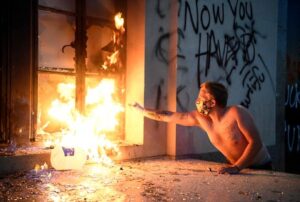 Not that I wanted to see my brother in flames, no, no younger brother would want to, but I wanted to check how a human being reacts when his seven-year-old brother tells him seriously, he is in flames. Along with his book. ‘You are on fire brother,’ I rehearsed my lines. I looked away for one last time for my brother’s sake. You are bored Manu. He is not. You are only 7. Nobody shoots you. I looked back. Struck the match and lit the loose end. I waited until the flame gained its way up to a respectable size. And then rose calmly to my knees, politely nudged my brother on his leg, told him he was on fire. “Chettaa, nokku, thee!”

With a scream, he leapt on to his feet, danced a bit, tore off his lungi, threw it into a corner, turned towards his innocent 7-year-old brother, and stamped out the arsonist growing in his home with his right foot.

2 Responses to My Brother put out the Fire in me.