You are here: Home » Featured » For a Patina of White

For a Patina of White

Aswathy Rajani worked in the Times of India as a trainee reporter a year back. Had it not been for her dream of becoming a teacher, she could easily have become one of the star writers in mainstream media. Presently she is working hard to get to her destined job. As her reader I always admire the way she conjures up in her writing whole landscapes and those fine moods so elusive and difficult to pin down in words. The teacher often learns quite a few things from his dear student and he is more than proud. Here Aswathy scales heights with her husband to see whether the things she had read about snowfall during her childhood are true.

This is the  wrong season. So we are double anxious for her. Will she get to where the snow falls? Let us listen…

As I trot up the jagged terrain numb as frozen peas, anxious of losing my toes since I didn’t know how cold cold has to be for a frostbite and cowering from the hailstones, there is only one thing on my mind—Please, let it snow.

You need more than luck to be caught in a snowfall in Rohtang Pass in September. You need divine intervention especially when you are only staying for four nights, when it isn’t winter yet and mostly because it was awfully sunny the morning you set off for Rohtang. So I prayed: “Please,let it snow.” 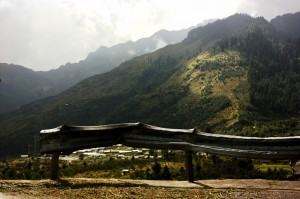 For over two weeks I romanticized my rendezvous with snow. For over my entire life I fantasized frolicking in it. From Snow White to Shakespearean sonnets, the word resonates with a mélange of childhood fairy tale nostalgia and elusive beauty eternalized in poems.

I woke up with a sore throat and a runny nose the second day in Manali. My husband on the other hand was ambushed by aggressive back pain.

“Aaargh. My back hurts,” Abhilash moaned as I woke him up. After some time of debating whether to take the day off or not, he decided to make the Rohtang pass detour. “I am a soldier. I am not going to be a baby and stay in bed because my back hurts. Pfft,” he scoffed. (He wound up under the blanket the next day).

As the cab snaked up the hill, it started drizzling. Was this a sign from the heaven? Now rain, next snow. I shook with excitement. We remained silent most of the journey. Old hindi classics droned from the cab stereo. I pressed my face against the window taken in by the beauty towering around me. Tall avocado green deodar trees stapled across the hills, apple orchards where the fruits slumped from their branches begging to be plucked, white jet of waterfalls bursting forth from boulders that could be easily mistaken for a bride’s veil from a distance, small cottages made of wood and bricks tacked erratically on the hills—all of which makes you feel like a child whose wish to be sucked into a picturesque postcard has been magically granted.

We stopped at Rahala falls for tea. I shudder as I step out of cab, washed over by a gust of chilly wind. I wrap my palms around the paper cup of steaming tea, hoping to steal the warmth out of the beverage. We still had quite a long way to Rohtang. With chattering teeth I mused over the temperature in Rohtang pass. I look at my naked feet except for a tattered pair of sandals and my bare hands; surely the coat I was wearing would amount to something. I rush to cab to escape the chill. Abhilash pops in too with a corn in his hand. I pounce on it and plunge my canines into the yellow flesh. Hunger wasn’t the trigger. The want of warmth was. Corns never tasted better before. 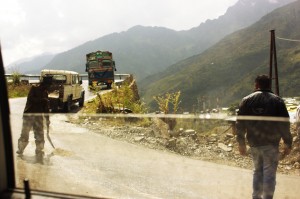 A brutally wrecked truck baring its skeleton lay ahead of us, a vestige that bore the evidence of dangerous curves and turns these paths beheld. But there is too much beauty smothering you to feel ominous about the morbid scene. After you pass through the last village, you begin to spot a lot of paragliding in the sky. During my casual paragliding research on the internet, Rohtang Pass did not come up a paragliding spot. Instead you see Solang Valley and Bir- Billing. We decide to go for it on our way back.

“We are here,” said our cab driver. This was known as ‘Point Zero’ of Rohtang Pass. I look around. Not a speck of snow. Freezing nevertheless. A row of tourist vehicles are parked in the vicinity. There were tents lined up that sold woolen wear, tea and noodles. A herd of horses were to be seen amidst all of it. “Abhi where is the snow?” I ask trying not to show my disappointment. “We have to go higher. They say there is some old snow. We need horses to get there,” he replied.

So my husband went on to perform his bargaining ritual which is a ten minutes long charade. He always threatens the vendor if it’s not his price then he would forgo the product or the service. In this case he would rather walk up 7 kms of jagged and steep terrain in biting cold weather than hire a horse at the ridiculous rate the vendor offered. Today he was bluffing because of his back. He would give in but luckily for us another vendor steps in and agrees to our rate.

Zam Zam and Poori Poori trot over a rocky terrain of vast earthy brown landscape. By now my hopes of seeing snow has vanished. Plob! Plob! Out of nowhere, the gods pelted icy pebbles upon us. “Hail,” our horseman barks. My face stung every time the hail hit me. I pull my hair over my face to protect it from the nippy hail. Despite being as numb as a corpse, I felt the embers of hope glow inside me. “Will it snow now?” I ask the horseman eagerly. “Its supposed to,” he assured me.

After what seemed like an eternity we reach the snow point. There is a stall up here. I am grateful they serve socks n tea. I grab a pair and wear them without bothering to pay first. I move towards the hearth on which a kettle brews tea. 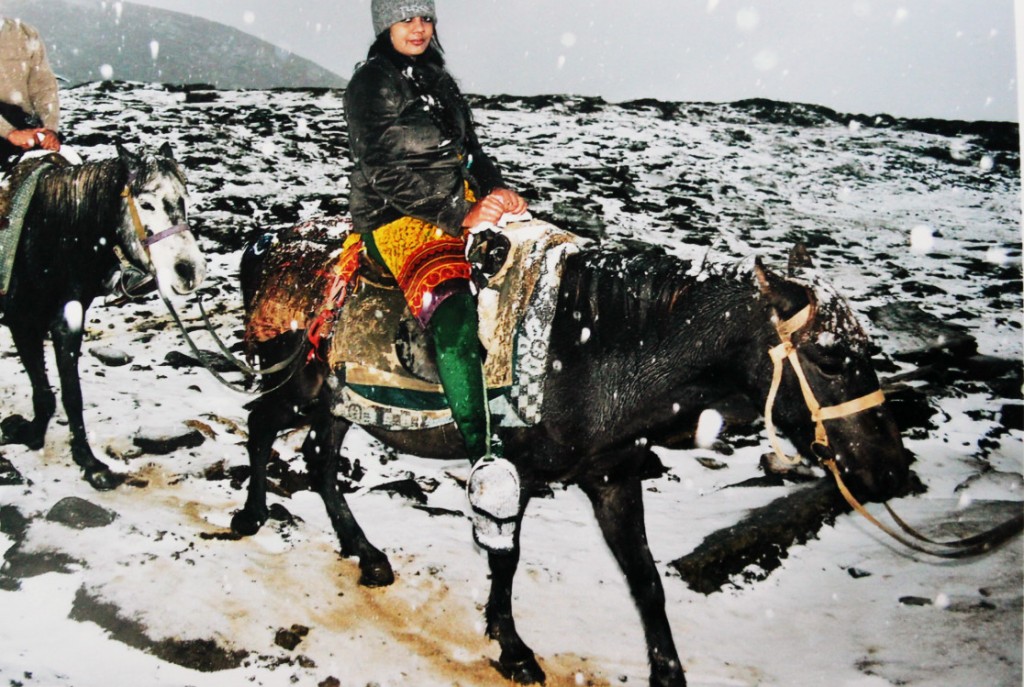 While I warm myself up, I notice the imperceptible transition of the hail to snow. Enchanted, I stare at the first snowfall of my life. I barge out of the stall, stretch out my palms to let the white feathery strands touch me. My palms were still numb to feel the tiny specks of snow that fell helplessly onto my palms. It was surreal. 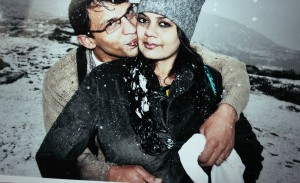 On our way back, the before beige ground was now a patina of white sea sprinkled with red shrubs. I was sure this was a dream. As were got nearer to point zero, things began to get more real for me. I could feel the weight of my bladder till my knees by now. I gave my husband the cue. He passed it on to the cab driver who politely pointed out to open air. My jaw drops for a second. I gather myself and think,”What the hell,” and stomped across the path to salvation which was behind a big boulder. As I anoint the ground with ammonia, I think “This would be first time I do something else on snow.”

Asmi has written 2 stories in Rum, Road & Ravings. You can read all posts by Asmi here.
by Asmi |
2 Comments |
Featured, Guest House

2 Responses to For a Patina of White