They believe this blindly. 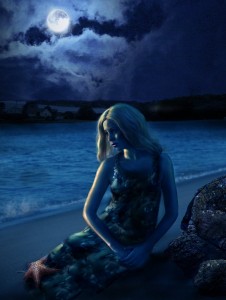 If the water mermaid, La Pincoya, dances on the beach facing the mountains on their island, with her back towards the sea, there is little hope for the day.

But if she dances facing the ocean: AHOY!

Come, let’s rush! We have plenty of fish waiting for us in the sea.

Chilao, the enchanted archipelago – separated from the mainland of Chile by a narrow channel and a unique culture – is shrouded in mystery even today. Under the veneer of dark forests, rolling mounts, bloodcurdling tales of witchcraft and their blind faith in demonic and benevolent spirits like Picoya, the Chilaoetes are simple fishermen.

Thanks to the Spanish Conquistadors, the people living in total anonymity were brought to limelight a few centuries back. But by then the natives had evolved their own culture and cuisine.

Today if you walk with me through the capital city of Isla Granda, I’ll show you a row of fishermen’s houses standing on wooden stilts raised over the water of Castro Fjord. Tell me when you’re tired. We can pop in to one of the most popular restaurants – the Restaurant Octavio – overlooking the frigid water of Castro Fjord to chill out and taste Chilao’s brand ambassador dish named, Curanto.

Curanto! It is not just the name of a dish, it is the genius loci, the spirit of the place. It is also a festival of sorts. 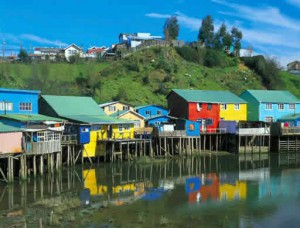 And to savour the essence of Curanto one must leave the restaurant and amble towards the pebbly beach. You may come across dozens of people scouting for an ideal spot to prepare their traditional dish which is as ancient as their race.

On days when the mermaid turns benevolent and the catch is plenty, people look out for silly excuses to call in for Curanto. It can be a wedding party. It can be a good harvest. It can be a baptism.

The Chilaotes never run out of reasons.

To prepare Curanto, the first thing they look out for is a convenient place to make a pit.

They dig a large hole, light a violent fire on the bottom and lay a sheet of smooth rocks over it. When the rocks get red-hot, they douse the fire and stack plenty of nalca(fern) leaves on it.They have only begun.

Over the stones they pile up layers of meat and vegetables which are separated by plenty of seasonings. Meat contains pork and chicken. Baby mussels, clams and fish form the layer of seafood. Plenty of vegetables, a mix of fried raw potato and butter are also stacked on the pile.

Once the pit gets brimmed with vegetables and meat, they once again stack nalca leaves over this mishmash in order to trap the heat within and then seal the whole thing with earth.

By now, the large pit would be surrounded by a large gathering: the cooks, the sponsors, the guests, the natives, their dogs, pigs and all. 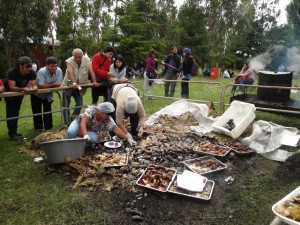 Men would begin passing around bottles of potato aguardiente and apple chicha to set their appetite on fire. The fiesta reaches its high point when the cooks along with the guests begin to shake their legs to the rhythm of harp and guitar.

By the time the aroma of cooked meat, fish and vegetables emanates from the pit, the shore would be going mad with songs and dances. Half drunk with chicha and sometimes with a new-found love, the islanders gather around the large pit once again, peel off the top lid of earth and leaves and dig their hands into the steaming food on the beach.

Today there are plenty of restaurants around in Chilao which serve Coranto, prepared in large cauldrons.

But it will be a dish minus the pit on the shore, the people, the music and the dance. 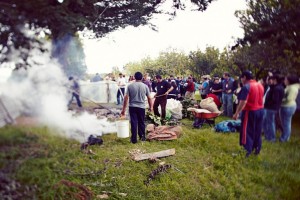 Sitting by a window in Restaurant Octavio that overlooks the glassy waters of the fjord, and waiting for a rich serving of Coranto, the most one can get to the spirit of the land is to imagine the mermaid, La Pincoya, emerging from the waters.

Catch the radiance emanating from her golden hair when she turns towards the ocean. She smiles benevolently. Her dainty legs begin to skip lightly to the rhythm of the waves lapping on the shore.

Ahoy! Coranto in the evening! The fishermen thrust their country boats into the cobalt sea and leap in overjoyed with the bounty waiting for them in the deep.

Manu has written 297 stories in Rum, Road & Ravings. You can read all posts by Manu here.
by Manu |
Leave a comment |
Featured, The roads less travelled