You are here: Home » Featured » Drinking with Peter the Great

Drinking with Peter the Great 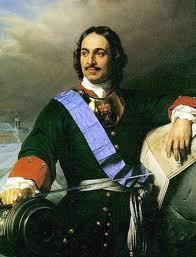 You like to tank up in parties at the expense of big shots of the country? What if we help you travel through time and then get you an invitation from none other than Peter the Great, that Russian Tsar of the 17th century?

Would you accept and go for the royal bash?

Well listen, you must haul RRR through sulfurous and smoldering embers of hell before forcing it stay even in the continent where Peter holds a bash for his poor pals and poorer courtiers. Not that Triple R hates bingeing (drooling). But it doesn’t like the idea of dropping dead in the middle of a heated session (where and when his friends continue bingeing).

Peter the great loved vodka spiced with pepper. Great for him. And the moment he ran out of it he grew immensely sad. Here’s the pathetic letter he wrote to his wife while he was staying in Paris for a short period: “There is an appalling situation. I have only one bottle of vodka left and there is none, absolutely none, to buy in Paris. I don’t know what I’ll do.”

Stop! Wipe your eyes readers. Instead of sobbing over the tsar’s heartache, you should better take your sympathies to those more deserving men who attended parties when Peter had enough vodka in his store.

Such a bohemian he was, Peter formed a club with his friends – The All Joking, All-Drunken Synod of Fools and Jesters when he came to power. Its goal was not only to carouse in abandon but it also loved to make a mockery out of the Church in Russia by conducting elaborate rituals with the help of booze. Just look at this cross-section of a typical Peter-the-Great evening: A pope was anointed before the party began. In the ceremonies that followed holy water for mock baptisms would magically turn into vodka much to the amusement of the ‘infidels’ who gathered to drink. Even mock weddings were conducted during the sessions.

Peter didn’t care a bit when the pious of the country saw the antichrist in him. 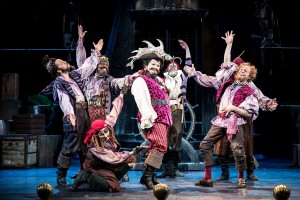 The words simply mean you must drink till you drop dead or unconscious.

Well, Peter was no preacher, he led from the front by first emptying his Great Eagle Cup measuring 1.25 liters of vodka in a single gulp.

Your turn now! Prove your loyalty.

History records that sighs of relief emanated from the court when one party of guests was spared the Cup. Peter only smiled. Instead of vodka the visitors must chop down clumps of trees on a path that led to the seashore. No bother, they thought. But on return to the palace, they gulped nervously as they saw the tsar greeting them with huge pots of vodka. No other choice they had but to empty them one by one until they dropped to the floor one by one hardly knowing it was a brief interval. Hardly an hour passed before the guests were shaken up from their slumber and hauled out to stuff them with more vodka.

The binge that began in the evening lasted all night. 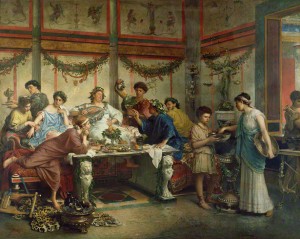 somehow managed to crawl back to their homes. But the ordeal was hardly over. They were called back once again and treated with breakfast. No tea or coffee, vodka again!

Their subsequent flight to the nearby island would not have put any dampener on Peter had it not been for some illness that caught the tsar. The indisposition finally distracted Peter from his playthings.

Now tell me. Are you game for the royal entertainment?

2 Responses to Drinking with Peter the Great