I woke up with a jolt when the jeep evaded a pothole with a sudden turn. We were deep in a forest (in shit!) or why else the road so dark and the sides so impervious! I rubbed my eyes and peered out through the glass; the canopy of tall trees had screened out the sun and there was an eerie darkness enveloping the long winding road before us.

“Where have we reached?” I asked. The driver did not reply. 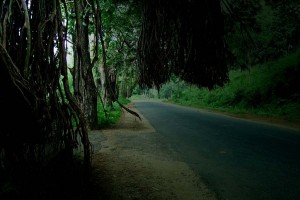 I was hungry; I checked my watch and found that it was late afternoon. The driver hadn’t spoken a word since I got into this jeep. Perhaps I was asleep most of the time; this whole journey was remembered to be patches of consciousness cobbled together, with me jolting up every now and then to nondescript places that could hardly catch any attention.

“Hello! Where are we now?” Silence. A strange fear leafs out its wafer-thin buds deep in my stomach.

When I got into this jeep at Kushalnagar my eyes were fixed on the driver. His pock-marked face seemed closed and impervious. The narrow eyes through which he looked at me were far from innocent, not to say more about his disheveled appearance, that spoke in the same tone. The only words we had exchanged during this long and tiresome journey were:

The rest was silence (if you don’t count the engine note and the occasional coughs and grunts).

I had no choice; his was the only vehicle ready for Kakkabe at that rate from Kushalnagar. So the trip began in an uneasy note with the commuter and the driver divided by thoughts formed in different languages. He knew not a single word in Malayalam, quite unusual for a Coorgian driver. 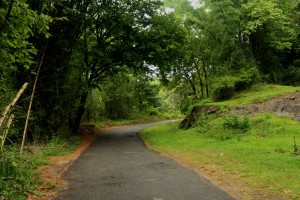 Then I dozed off midjourney.

Only to wake up here in the middle of a forest when the jeep evaded that pothole. Where am I? I had been in Coorg for the last four days. And this present trip to Kakkabe in a taxi would set me on course for the final feat of my journey – a trek up the tallest peak in Coorg.

“How many hours to Kakkabe? I shouted again in English.

The driver kept his stoic silence, ladling more adrenaline to the already blasting combustion engine in my body. There was no signal in my mobile. This could be the ultimate confrontation in my life; I was now sure that the taxi was not heading towards Kakkabe but had veered off somewhere and could be presently moving towards a godown deep in the woods.

I had an expensive camera, mobile phone, laptop, cash, and a gold chain with me. I quailed at the thought of him stopping the jeep now, and pulling me out, with a machete in his hand. From the back seat his muscular shoulders seemed too intimidating for my skinny arms and pot-belly (small).

I came all alone to Coorg. If I am killed here nobody would come across my corpse for at least a month, I trembled and appraised my body rotting in this no man’s land with all the valuables gone.

May be he belongs to the kidney racket; my arm involuntarily went down to caress my back which would soon be slit open. May be he is a Maoist. I shuddered as I thought about the cheap rates of my ransom over which the government and my family would still haggle for my release. Oh God, not only my life my reputation is also at stake! 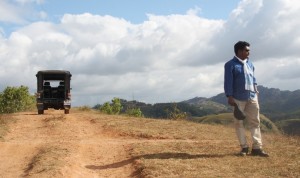 I was sleeping peacefully on the back seat with a smile plastered on my face. My worries had long evaporated. What happened! In the height of panic, a lightning crossed my mind and I flipped out my mobile to check the gps signal. I saw the blue arrow steadily cruising towards a landmark named, ‘Kakkabe.’

This was the only possible route. I looked at the driver and spotted a lambent glow of goodness spreading on his face.