There are a hundred ways to deal with a night.

But all the 99 pale into insignificance before the one you have on a mountain. Yes. A night on the mountains under the canopy of a swooningly resplendent sky 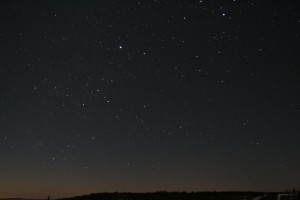 Mountains are outskirts to a city named heaven. It is great to examine your life near the clouds, soaking in the thin air and the solitude. Sages know better.

Put out the moon, for it like the sun, bleaches out the philosopher in me like a brawny detergent. Put away the crackling firewood over which old love once again catches fire, new ones get forged. What I need tonight is just the subtle and the faint, the breeze and the starlight. Blow out everything else.

Long back I still remember a 23-year old lad chasing a wanton September rain across the district of Kasargode.

When I reached Kumbala one morning, the town was crouching under a gritty rain. I clambered into a private jeep and set off to my destination, Possadi Gumpe. One hour of bumpy ride against the steep incline and raindrops the size of pebbles, I reached a plateau over a rise.

Mountains! I put my foot on the squishy ground, my heart was soggy with excitement.

The rain had left the grass squeaky clean. A few cattle were grazing on the intense green blades. Gumpe looked in every angle a picture postcard a penfriend would 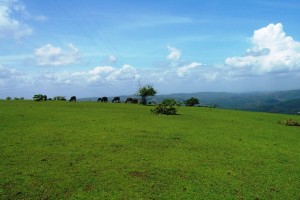 Suddenly my eyes picked a lone figure on a nearby mountain – a hut, an ashram. Against the green earth and the sky which was limping back to blueness, the dark hut, dripping and shuddering in the after rain, assumed a character.

I met an old man inside with a white beard. On his broad forehead, he wore a thin paste of vermilion and below that I spotted a kind smile. Except for the black mundu and white shirt, time has now abraded every other feature of that sanyasin who welcomed me home with a cup of black tea and plantains.

His ashram was too small for the two of us to spend a night there. But I will be on this mountain when the night falls, I decided not to waver. Today or never. The rain clouds had already left. Why not?

“But it will be cold outside, my son. I can give you blankets to wrap yourself with. Would that be enough?” I nodded blissfully. I had been to mountains before, but this night at Gumpe would blow all stereotypes into thin air, I smiled inwardly.

The night smelled overpoweringly of stars. 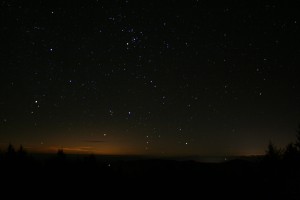 A few wisps of clouds grouped and ungrouped hysterically above me, but they never seemed to be content with any formation; finally they disbanded themselves, left in a huff, realizing they were not in the best of their form tonight.

Nothing could come between me and the stars. Here, I was lying on the grass, which was once green, which is now dark.

A kerosene lamp sputtered meekly, but the dark mountains remained somber throughout. From where I lay, all I could see was the dark figure of the sanyasin sitting away from me, the hushed glow of his eyes reflecting the lamp, and the faint seams of huge mountains warily guarding the ashram behind him.

I was half-sozzled with the mountain air.

“What is the meaning of life, swamy?” I asked when the silence around the kerosene lamp grew uncomfortable.
“Would you like some black tea?” he replied. The wind now had the serrated edge of a knife; I shivered each time it whooshed past us. I sipped the tea and decided to crack open the mysteries of this night, and the man sitting opposite, and a life in the mountains.

The sanyasin sat through my questions patiently. But when he finally spoke he blew away the texts I drew my wisdom from and came in straight for a soul, with private wounds in it. “You are sad,” he said.

“I don’t understand, but how can you live here, away from the society on the mountains?” I asked quickly, brushing him away. This time I saw him smile, against the lambent light. He took a deep breath; his reply was soft, the crumbs of which reached me with the light breeze, “Do you live in one, Manu? You truly belong to the society? I must respect you then.” 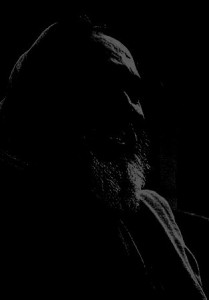 I felt a tiny balloon of sweet sickness exploding in the pit of my stomach. I didn’t reply; I lay silent for the rest of the night. When the old sanyasin blew out the kerosene light, I lit a dim one deep inside, screened it with my hands, so that no one lying near me would catch me reflecting.

Against the stars, I held my life to see how light refracts as it trickles down through the prism to form strange squiggles in my mind. Am I alone?

I drifted in and out of sleep all night, leaving me wonder where I would wake up the following day – in sleep or wakefulness. I rose many times, and caught myself sitting, absorbing the starlight buffing the grass.

The dark blades shone like silver fish flitting below translucent waters; they shuddered with every breeze that came by this mountain that night.

I tried to sleep.

I counted the stars. I traced the Milky Way. I reflected on the big bang. I grew a sport on the falling stars –I blew them out before they blew themselves out. I did everything to lull down my nerves startled up into a strange wakefulness. Tell me how can I sleep  with the somber mountains and a billion stars peering down at me with their lidless eyes? 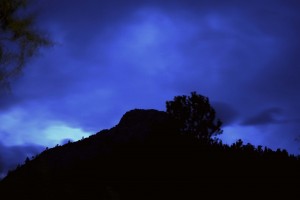 I don’t remember when a dense fog rolled in.

Every time I woke up that night, I might have taken a swig of the starlight. My heart stayed drunk for many months with all the manna it tasted in a single night dripping from the stars . I was happy like never before.

A night on the mountains under a starry sky. Go, my friend, go.

Manu has written 297 stories in Rum, Road & Ravings. You can read all posts by Manu here.
by Manu |
7 Comments |
101 reasons to love Kerala, Featured