You are here: Home » Uncategorized » Nelson’s Blood aka Pusser’s Rum 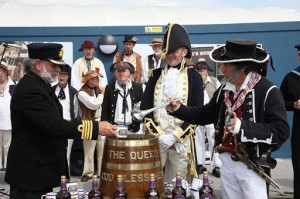 In a minute or two after the cry rent the air, the shipmates spiritedly formed a long beeline before the Purser, who’s the officer in charge of the grog. Half a pint of Purser’s rum, that’s all that was allowed.

And that was all that made the sailors mutinous.

Four hundred years ago, the official drink of the Royal British Navy was beer. But in long sea voyages, beer went putrid. So the Navy was looking out at the endless sea for a solution, until their eyes fell on a drink drunk by the Caribbeans – RUM.

Beer was now replaced with the dark drink, which could brave those long rides over the pitching waters.

But rum did strange things to its drinker especially when half –a-pint of it sloshed in his belly. Sailors sung aloud blissfully:

“The wind that blows
The ship that goes
And the lass that
loved a sailor.”

The more romantic they got, the more unruly and rebellious they became. Soon Admiral Vernon who was affectionately called by his shipmates as Grog ordered to tone 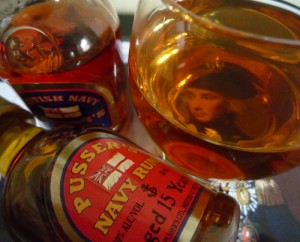 down the daily ‘tot’ of rum with a lot of water. He was fed up with that “swinish vice of drinkenness” that affected his men.

The seamen groaned in protest. The watered down rum served by the Purser was addressed contemptuously by the sailors as ‘grog,’ after the name of the admiral they once loved. Inadvertently, grog became the first cocktail in the world as rum was mixed with water, sugar and lemon to beat the scurvy.

It beat the mutinous spirit among the sailors as well.

Much was happening at the sea those days. When the Spanish Armada was defeated by Admiral Nelson and his men, England became the supreme naval power in the world. But still, in that fatal battle, the hero of the war fell on his knees as he was shot down by an enemy sniper.

The dying admiral had only one wish – he wanted his mates not to pitch his body into the sea as was the usual practice.

So when he died Nelson’s shipmates put his body into a barrel of Purser’s rum to preserve it and they turned back home. By the time they reached England something had changed terribly. As they tried to retrieve the hero’s body, they could not find a single drop of rum in the barrel. The thirsty sailors had made a small hole at the bottom and drew away all the alcohol. 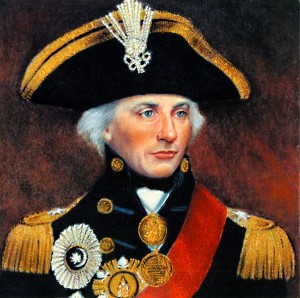 From then on, Purser’s rum began to be called, “Nelson’s Blood.” As time marched on, the name Purser’s Rum got corrupted into ‘Pusser’s Rum’.

At one time the Navy rum was used as a kind of crude currency in ships. To offer your tot of Pusser’s to a fellow sailor was considered as a saintly act.

There were different smaller denominations of the alcohol currency: If you’re offered a sipper of Pusser’s rum by your shipmate, you should take only a gentleman’s sip, a gulper meant a big swallow and Sandy Bottoms, which came as a rare privilege, meant 3 gulps, the entire tot of your saintly friend.

But all that fun came to an end in the last half of the 20th century.

On July 31st, 1970, known as the ‘black tot day’ sailors around the world in the British Royal Navy fleet raised their glasses for one last time, many with their eyes wet, with their sound broken, said good bye to the drink which kept their spirits up during the endless voyages around the world for the last three hundred years.

It was the last remnant of an empire where the sun had never set for a long period in history.

Pusser’s rum would never be issued on board ships in the Royal Navy. But such a tough drink Pusser was, it was not born to die on water. Born in the Caribbean, cradled by the waves, Pusser’s now had grown a yearning for the land again.

Nine years after Pusser’s was withdrawn from the Royal Navy ships, an entrepreneur name Charles Thobias approached the Admiralty with a proposal. He wanted the Navy to help him revive the Naval drink. Thobias obtained the rights and blending information from the Admiralty, formed Pusser’s Ltd in the British Virgin Islands and began selling the highly acclaimed spirits since 1980. The company began to  support the Tot fund set up by the Navy to help naval charities using its revenue.

Today Pusser’s Rum is considered as the single malt of rum with the elaborate procedures that go into it. Distilled in wooden pot stills, the way it was manufactured centuries ago by seamen, Pusser’s keep a long tradition alive. The wood stills impart a distinct flavour to the dark drink, which the other rums made in metal stills lack. 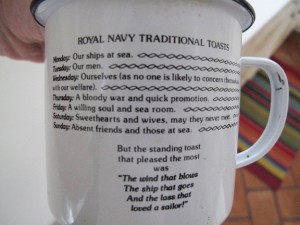 If you want a taste of the ocean, laced with the spirit of the seamen who sank Spanish ships and pirate boats in a courageous age, get one of the 18,000 limited edition Nelson Trafalgar Bicentenary Decanters made in commemmoration of the victory at Trafalgor. Remember you are also tasting Nelson’s blood.’

Read the 16-page booklet which comes with every bottle to know what the drink meant a few centuries ago.

Today is Saturday. Let us say the toast that the seamen raised back then on wild oceans(Each day of the week had its own toast). So say aloud with me:

“Sweethearts and wives, may they never meet.”