You are here: Home » Published Stories » Freekick » Freekick Family » War of the Worlds

War of the Worlds

“Chetta, I am really lucky. I never thought I would get a man who doesn’t drink.” I turned back to see who she was talking to. Damn! To me indeed.

I smiled; on the nearby wall my shadow bawled aloud hitting his head on the concrete. This is the end, he warned the tippler in me between his screams…

Months passed. The new-car smell of the marriage wore off. The fresh-book smell of playing the master of the house also waned. Only the nostalgic smell of Old Port rum wafted in incessantly from the past and lingered in my nostrils.

“Aliya…today we are going to Jins bar,” my friends rubbed it in every evening. I grunted, ummed, aahed, grrd. 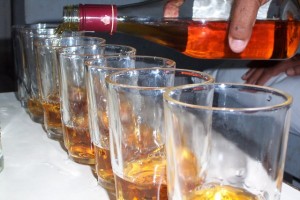 One day, I asked my wife while helping her with washing vegetables: “How is your headache, dear?”

“Manu chetta, I don’t have headache.”

“Hmm…you don’t towel your hair properly after bathing. So you will get headache.” “Manu chetta, what do you want?”

“Hey nothing,” now I began to mop the floor with a wet cloth I found near the washing machine.

“Manu chetta, give me that. That is our daughter’s uniform. I washed it only now. Do you have anything to tell me?”

“Edi, nothing. Just a funny question. Do you know what beer is?” My pulse went up, my breathing almost stopped waiting for her answer.

“Yes, Manu chetta, it is alcohol.”

My face fell. With a heavy heart I left the kitchen, leaving the uniform on the floor, the vegetables to wash themselves. I still don’t know how many hours I spent on my bed that night. I consoled my poor shadow who was crying its heart out against a zero-watt bulb.

I had wished in vain I could talk my wife into believing that beer is like milk, honey, bournvita and horlicks – non-alcoholic energy drinks, our body desperately needs. But, hell, she knew what beer is.

We were invited to a party, the following week.

“Come on Manu, there are no pegs in having one or two problems occasionally. This is some good potato, no Brandy no juice…er…then what is this Manu?” Reji was all nervous as he raised a glass of brandy shivering in his hands to me.

“How should I know? What nonsense are you talking?” I asked. My mind was seething with anger- an anger so fierce that I wanted to smolder him in its fire had my wife not been near me. She was all upset with Reji’s panic state.

“Sorry Manu,” Reji somehow came back to his senses. “Come on, Manu. There are no problems in having one or two pegs occasionally. This is some good brandy.” He completed the dialogue mechanically.

I burst out: “Who are you talking to? Do you think I will take this poison in my life? Not even my dog will. It is a big no, understand.” Reji pleaded, prayed, requested, almost cried, but I was rock.

Even Divya was moved to tears seeing my friend’s pathetic prayers. “Manu chetta…,” she said. “Don’t, Divya. I won’t touch it,” I shouted, my finger wagged, my temple twitched, my eyebrows knitted.

Reji now changed the gear, mechanically shifting himself into a robotic tone – “Go to hell, man. Go and drink that potato juice. That is what wimps like you drink, not alcohol,” he read out his part and staggered away. I sneered and strutted towards the table to serve myself half a glass of crystal clear potato juice. “Manu chetta, you are great. I am sorry…,” Divya followed me.

In between sipping the juice, I told her, “My dog will drink alcohol! You know my dear? They used to call me ‘potato’ for drinking this juice while they downed that damned alcohol.”

Friends, that was how I knocked off vodka from her list of alcoholic beverages. I was happy sipping it on as potato juice. The money I spent on throwing that one party had once again made my life interesting. Mission accomplished even though my friend Reji initially messed up with the dialogues. He managed his part at the end.

I got too greedy at some point in my life and tried to get brandy, whisky, rum and beer also off that list of alcoholic beverages that my wife kept.

I said calmly: unless I have a genuine reason I won’t touch the drink. We signed the treaty.

Ever since, I have been in the sea with a sprawling net to capture even a maanathukanni(the smallest fish in Kerala) of a reason however deep it swims. To enjoy good times with my friends. My wife, I know, is also out patrolling on the same waters like that Italian ship to tear into my weekend catch of excuses with protests, logic, promises, requests, threats, outbursts and of course tears.

The war lines are drawn.

Caution: Now you are within the firing range of a typical family most malayalees can identify with. Freekick Family begins here.

(I drink rarely. But when I highlight my drinking days, my wife, relatives and students who read this column might think I am a drunkard. That will give me yet another reason, mind it. Cheers! To your health, sense and imagination).

Manu has written 297 stories in Rum, Road & Ravings. You can read all posts by Manu here.
by Manu |
18 Comments |
Freekick Family

18 Responses to War of the Worlds