You are here: Home » Featured » Who sells most shells in the spirit world?

Who sells most shells in the spirit world?

You might have tasted all the glamorous drinks in the world by now. Lucky guys, Rum is sitting here all green with envy, biting fingernails in frustration. But tell me. Have you ever held a bottle of the best selling spirit in the world? No!

See this, I still have got one on you. 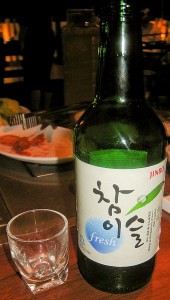 The best selling spirit in the world is not rum, brandy, whisky, gin or vodka. It is a soju, a clear spirit flowing all the way from an Asian country. Sounds like the pet name of some cute boy, doesn’t it?

So where arewe heading to, this week?

We are walking through a street in South Korea. Pink slabs of meat welcome us from the roadside stalls, the aroma wafting from meat that crackle over hot stoves would pull us in any minute. But hold on. Hmm…now add to that the pitter patter of a rain. Cute peachy girls, businessmen tired after a long day, and the stodgy youth are all sitting under the pitched roofs, sipping calmly from bright coloured ceramic bottles with their faces turning degree by degree into beet-red.

No point in resisting fella. Let us jump in. Time to soak ourselves with the genius loci of Korea, Jinro soju, the largest selling spirit in the world.

Soju? What the ‘ell is that buddy?

Tell you. Soju is a distilled beverage popular in Korea. Clear and colourless, it tastes almost like vodka on your palate but definitely holds more sweetness than the Polish drink due to the sugars that sweeten it. Rice and other starches are the traditional ingredients, but when the government banned it sometime back, they switched over to potatoes, sweet and bitter, tapioca, wheat, barley.

So they too began to march into the distillery to reinvent themselves to meet their destiny, to become the most coveted spirit in the world.

Of all the sojus produced in the world, Jinro Soju is the Dalapathy, the leader of the pack. Just picture this: 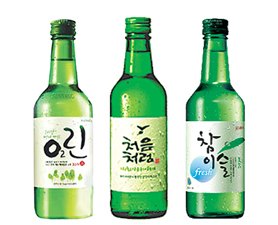 Koreans alone consume one million bottles of Jinro every year to keep Soju firmly at the top. Japan also helps; the drink outsells almost 90 competitors in the country for the last 10 years.

With all that hectic guzzling down in Korea and 60 other countries, Jinro doesn’t brook any competition in the world arena as well. It holds the heavyweight title leaving great brands like Bacardi, Smirnoff and Johnny Walker far behind for more than half-a-dozen years.

It was in 1924 that Jinro hit the market, bringing major tectonic shifts in the drinking habits of Asia. Jinro never had to look back since then.

Choice spirits and spring water form the recipe behind the magic, Koreans say with humility. But we must get get a bit closer to the distillery to watch the process:

“Jinro is a natural bamboo charcoal Alkali Soju that is made from 3 year old bamboo of Mt. Jiri and Southern Coast of Korea. This bamboo is made into charcoal by continuous roasting at 1000C for 12 hours and natural cooling for another 12 hours. This charcoal is used to purify both alcohol and water which are the fundamental element of Soju. The alcohol and water is purified through the bamboo charcoal 4 times eliminating all the harmful element of alcohol and impurities while adding the rich essential mineral components such as Kalium.” 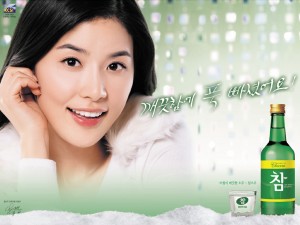 You got a high listening to all those details?

So if somebody comes from abroad, tell him that you would be at the airport only if he brings a bottle of Jinro. Receive it with a smile.

It’s time for the rituals.

The smooth crystal-clear liquid which comes in attractive bottles will not tolerate soda or water. No juices too. Drink it neat. The 20% spirit is not famous for burning your entrails. So chill out, sip it and brag on your fb timeline with a pic (to convince me) that you have just drunk the most popular spirit of the world.

Every second bottle you get should be send to Mr. Rum for getting its quality analyzed.

Rum has written 4 stories in Rum, Road & Ravings. You can read all posts by Rum here.
by Rum |
2 Comments |
Featured, The Big Shots

2 Responses to Who sells most shells in the spirit world?