You are here: Home » Featured » The jungle at the other side: Part-1

The jungle at the other side: Part-1

You haven’t seen her all, dear. I wanted to tell Sai.

He was all excited about this beautiful place, Kuruwadweep. I looked across the water, to the lush foliage, beyond the big trees which take up pint-sized islands all for themselves. A wave of nostalgia swept over me. 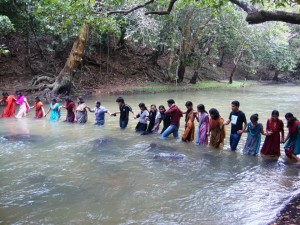 My students were thrilled to bits with their close brush with nature as they with their trousers hitched up to their knees, excitedly holding one another’s hands in a long row, dipped their feet and inched across the waist-deep stream gushing forth violently.

Silhouetted against the light, they seemed to me like a string of cardboard pieces carved into human shape in a puppet show. As they moved across, my mind riffled back through the years to a journey I made a decade back.

I was working for ‘The Hindu’ as its travel writer. Those days, I had to move around a lot to discover less unexplored places in Kerala for the column.

But when Kuruwadweep in Wayanad, was slapped on my itinerary, this writer found few reasons to cheer up. The place with its teeming tourists seemed to fail every condition, the column ‘Road Less Traveled’ demanded.

Even when Sreemithra, my student, offered to help me with her uncle who was living in Pulpally, I grunted a ‘yes’ over the phone, still not happy with the prospects of my destination.

Gangadharan was a middle aged man with a neatly trimmed beard, and a broad smile under his slick hair. He picked me up from the bus stand at Pulpally.

It was already seven in the morning.

And this writer was still smarting under an embarrassing incident that happened just before Gangadharan came to collect him.

I had asked an adivasi woman, who was in the same bus with me, permission to take her photo. My camera had long been dreaming about a great pic of an adivasi woman grinning broadly with all her traditional gear (her curious dress, her thodas, and other trinkets on her body).

This woman was a perfect specimen.

She looked at me sharply, shook her head, and said no. It was a resounding no, which admitted no further pressures without losing one’s self-esteem. I looked around. Cool, man. This is Pulpally; you are far away from your loving friends, I resolutely drew myself up after the fiasco.

After having a breakfast of soft idlis washed with red, steaming sambar and hot tea, strong enough to kill lethargy, we stepped out of Gangadharan’s home to explore Kuruwa.

“There is a backside entrance to the islets,” he said as I offered to take a ticket for him. We were soon bumping through a rutted village road in a private bus. I held fast onto the iron railings above my head and tried to steady my wildly dancing body on the hard steel rod that shot up from the platform of the bus to the roof, behind me.

But it was not so cool a journey.

The problem was an old man, who also was leaning on to the same rod, where I had my back rested. Even the slightest lurch of the bus could run our bums, reared up in different districts under different conditions, into each other. Despite my skills of balancing my vertebra on my side of the slim rod, ramming-ins happened every time the bus fell into a ditch and emerged.

My mind was now desperately preoccupied with bums, his amid mine, planning how not to run my back into his again at the next lurch, the next sway, all at the cost of missing great sceneries that shot past through the window.

I turned back to see who the proprietor of the other bum was and was greeted with a friendly flash of gappy teeth, red with betel. I did not smile back. Thank god, the bumship did not last as Gangadharan who was comfortably seated, got up and motioned me, to get ready for our stop.

I muscled my way towards the exit, without brushing anymore bums, and the door creaked open to a nondescript junction in a nowhere land. I saw traces of jungle teetering to the roadside, where a young fellow of about thirty, shabbily dressed, with unkempt hair falling over his forehead was waiting for us.

He greeted Gangadharan, and looked my way, now breaking into a broad smile.

His breath reeked of beedi. Without a word, he turned back and started leading us towards the thick foliage which I could now see.

“What is over there?” I asked pointing to the numerous trails of smoke billowing up at distance. Cooking fires! In no time, we were into an adivasi settlement, nestled on the side of the forest.

I latched on to Gangadharan and peppered him with questions about how the adivasis live, what they eat, what they talk and why. “You can ask him,” Gangadharan replied motioning me towards the young man guiding us. Rajan was an adivasi guide.

We walked through the thin path inside the settlement, but every now and then, we had to make way for adivasi women who came our way with stacks of grass, precariously balanced on their heads.

Soon we reached the end of the path and without warning, the forest reared its head suddenly before us. 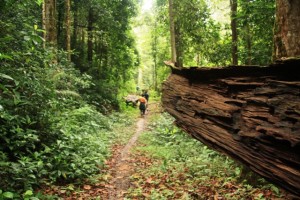 “Be careful. There are lots of snakes here. Poisonous ones,” Gangadharan warned me, and vanished into thick foliage  following Rajan.

I looked down on the fallen leaves, ankle deep, welcoming me into the deep forest.

The Jungle at the Other Side: Part 2

3 Responses to The jungle at the other side: Part-1