You are here: Home » Featured » The Loser’s Game

First published at yentha.com, ‘The Loser’s Game’ was a well-acclaimed piece written by the author on World Suicide Prevention Day. Here the writer infuses the old story with new observations and fresh memories about his late brother, telling us more strongly that suicide is a loser’s game.

There were signs all over the place.

On the rose plant that you did not water for the whole week, on the crumbled papers in the wastebasket in your room, on the hug you gave to your ten-year-old 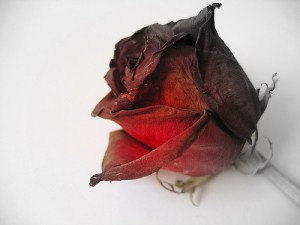 brother who just gaped in wonder suspecting another ruse to cheat him in some game, on the long watery gazes you had on the empty walls across our home, on the sudden magnanimity of gifting your prized possessions to your friend…

Only that, we dumb players who couldn’t see the emerging pattern, picked the broken shards of a heart and wondered what. We couldn’t understand the rules of the game. We couldn’t read death in your smile.

The morning was like any other morning on that day, and it didn’t speak anything about its evening which would rob us off a chunk of our heart.

But as they say, ‘it was destined.’

You wrote that three of you, friends, had decided to commit suicide. Well, if you are listening brother, they didn’t. They pulled themselves out of the pact at the last moment. And waited.

One is now settled in the UK with his family, and the other I met couple of years ago. I saw two cherubic children running about him. He has a beautiful wife and a good job. It was difficult for me to help him remember you, his compatriot in a tryst you all made on a cloudy day 28 winters ago.

He said he was busy and must go.

You were all rebelling against a teacher who gave you the wrong end of justice. You thought death would speak for you. You expected that your friends would burst out in rebellion seeing your body. Nothing happened, dear. They came here, cried their bit and went back to their homes. One thing, I forgot… they declared it a holiday.

Memories fade. When the headmaster came to your class and reminded your friends about the impending exams they forgot their fury. You can’t blame them — you were all in your tenth standard. Brother, you showed some magnanimity in not mentioning the teacher’s name in your suicide note. That came handy for those who preferred to live. He could return to the school to teach the boys for five more years.

Between that cold January and sweltering March, only we suffered the loss — your mother, father and brother.

A rundown of events of one February evening 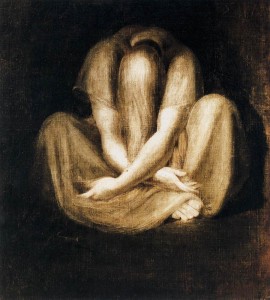 My mother came from the office and scolded you for scoring low marks. You were cool, smiling, already decided. You could have put the blame on the teacher; but those days, parents believed the teacher more. Seeing you stand there adamant, our mother(she was just like other dumb mothers, not experienced in sniffing death around a 14-year old son)got more furious and gave me(a 10-year old watching curiously the turn of events) all the butter buns she had brought from her office party.

One I ate; the other I put away in my trouser-pocket for difficult times.

The whole afternoon was drenched in rain, the following day. I waited for a moment I could slip away from the sympathizing crowd. Then I came running up to you, to that mound of earth, still warm with the dreams of a 14-year boy, near our home. I don’t remember whether I was crying (You could hardly pick tears from the rain). Do you remember? I stood there for a while, wondered who would put me again on his lap in our next bus journey to Kanyakumari, dug out that soggy butter bun from my pocket, tossed it at your grave and dashed back home.

I thought nobody had seen me in the torrent. But, brother… the weepy eyes of a 7-year old girl in our neighbourhood were following me through a dark window all the way up and down. It could be a disturbing image for girls of her age. Fifteen years later I was surprised how little a nudge was needed to get the girl of my dream accept me as her lover, then her husband.

She had to answer a childhood image.

See my brother, how even deaths become grist for the mill, food for the living. And have you noticed how the world rushed back to fill the void you created at our home? You would have winced at that moment when a little laugh, a modicum of a snicker, (but suddenly smothered out) crossed (at a casual joke someone made) the faces of your bereaving relatives for the first time after your death. Had you thought they would be crying forever? Your grave had already turned cold and mushy with the rains.

Brother, you were the only loser. My brother… listen to these lines:

A student came to me some years back. I didn’t know what to say as she showed me her wrist with deep gashes, almost healed. “Why did you do it?” She told me that her father was in prison. And her mother didn’t trust the good-looking girl for reasons beyond logic. “I am going through hell, sir. My mother thinks that everyone is after me.” When she couldn’t stand the tantrums her mother threw, she decided to teach her mother a lesson.

I thought about you, brother. Even though both of you join in your hosannas for praising death as a generous host, a wide sea separated you from her, brother. Because that girl was in this part of the world. She had time to think and could still come back through prayers, friends and her teacher. 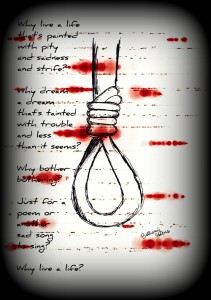 You wouldn’t believe how the world has changed since you went (What should I tell you about the things you miss! All you had experienced at your time were those tales about television. They were true, brother). Very few have time to think about your loss these days. We could live whole months without a single thought about you crossing our minds.

You didn’t create a revolt; you didn’t make a point; you didn’t upset the people you wanted to; you didn’t teach any lesson; you didn’t upturn even a single leaf by your death. Even we have learned to live, dodging the pinpricks of memories. You can do nothing about it. Absolutely nothing.

“Nothing could stop you
Not the best day, not the quiet, not the ocean rocking
You went on with your dying” – Mark Strand

9 Responses to The Loser’s Game