You are here: Home » Featured » The Distant Tiger

I was about to turn the light off when my heart leapt jolted out by a sudden rap on the door.

“What hell!” I checked my mobile for time,  useless now, right at the blindspot of all the mobile towers in Palakkad. 12 am. Against the calm, serene, cold night at the Inspection Bungalow at Sairandhri, Silent Valley, the rap at the wooden door was too pronouncing and urgent to dismiss. “Sir, please come outside!” 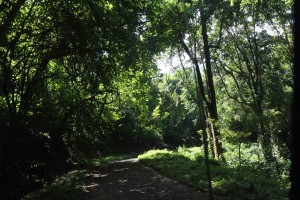 It was half whisper, half December breeze.

I stumbled through the dark and unfamilar corridors of the old building that reeked of dank moss. The solar lamp in my hand could throw ahead only a meek light along the way.

What? Opening the door, I asked the darkness outside. A stiff cold draft blew in, as if it was prowling around the building all evening for its moment. A forest officer, whom I met in the evening, moved forward to the penumbra of the light. His big eyes sparkled as he rasped again : “Sir, come quick!”

I followed him through the dark, this time without the solar lamp, stumbling on big boulders all along, upturning them, which I feared could be unsettling coils of neurotoxin resting under. I cursed myself silently. I didn’t know why I agreed to leave that semblance of comfort I felt at the IB to take a large forest by foot at night, blindly trusting the pitter-patter of footfalls leading me to some surprise that could be epiphanic or plain lethal.

Without anything to look at in the dark, my whole body shuddered in the night wind, before turning into a pair of huge ears. Crickets chirped piercingly, chipping away rapturously at the silence the forest is named after. Monkeys screeched from distance, but soon quieted down, perhaps alerted by the dim sight of two men far below inching on towards a hillock they would not dare to go this evening.

I froze on my feet as something rustled near. What could that be! King cobra? Python! I lost all orientation. I could not hear the footsteps that led me this far. Which way to go! Which way to turn! Am I lost in Silent Valley!

Before I could muster enough courage to ask I heard something like a deep rumble from the distant mountains. 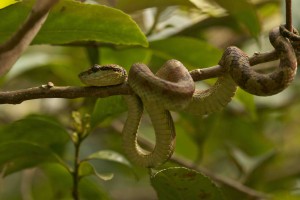 All forest froze to silence. “What is that!!!” I asked. “Come,” a hand grasped me by the shoulder and literally dragged me up the hillock. I wanted to turn back. When am I going to wake up from this nightmare! As I stumbled my way up, I saw the dim outlines of a few more men, could be more forest staff, standing at the crest of the hill, looking away, looking down at the deep valley and the mountains on the other side. “What is it!!!” I asked still gasping for breath as I joined them. It was answered by a series of deep growls from the woods below. No one breathed, no one could. All Sairandhri was now a single ear frozen and perked up towards that loud voice rising from the deep valley.

“A tiger!” someone gasped. I didn’t ask how he knew. But it was in the air. It was in the valleys. It was in my blood. The presence of a tiger. It roared again and again furiously.

I remembered the first time I had a brush with a tiger. I didn’t see it. But I saw it in the eyes glistening along the roadside at night. Deer! “Look! Do you think they are looking at us, sir?” asked my guide. The deer were all on feet I could tell even in the dark, but the sparkle from their eyes were directed at a place beyond us on the narrow road. They were looking at the mountain behind us. “They have picked his voice! He is somewhere there,” he turned pointing at the outline of the dark mountain. A shudder went through my spine looking again at the alert eyes of the deer.

I saw the tiger in their eyes.

But now the whole valley trembled with the roar of an impatient tiger. Then one of the forest staff, I couldn’t see who, told me this incredible account, which I will never forget in my lifetime.

“Sir, the tiger has caught his prey. Maybe, another animal could have smelt his way to the catch. The tiger is scaring it off with his voice! That is why this rage!” 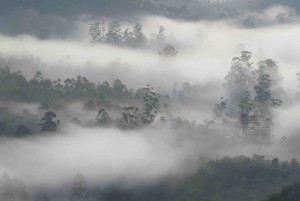 I still don’t know how he could tell it so vividly. But as he narrated I saw it before my eyes: in the thick black night, a tiger prowling after its prey, leading it astray from the group, making that final leap for the kill; the struggle in the bushes, the last writhing of the poor animal, the slow return of silence in the woods, and then suddenly the tiger spotting the other, emerging from the bushes.

He roars marking his territory, pressing down his nails further into the blood-drenched flesh on the ground, hardly knowing what shivers he sends up to a distant hillock where a shuffle of men trembles with dread.

And we could see it all from this distance! By staring into the darkness that enveloped us all.

3 Responses to The Distant Tiger