You are here: Home » Featured » The Criminals who Mass-copied: Part II

The Criminals who Mass-copied: Part II

Continued from ‘The Criminals who mass-copied: Part I

Darker, I mean it.

Our society is divided not on the grounds of wealth, creed or religion. It is divided simply by skin tone. Complexion. ‘Colour.’ 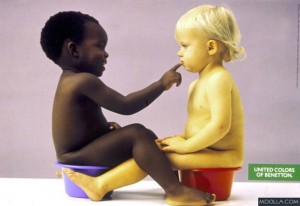 Watch popular media. Count the number of celebrities who are dark, I mean the ones who could sway hearts. The ads of fairness creams leave deep chatter marks in our mind. The fairer, the better. Repeats the mantra.

The dark is born with a yearning to turn into what it is not. It is fed with all the fruits that are known to change the skin tone. If it’s a girl she has to put in an extra lot consistently in her life, in her career and romance, to compensate for her tone, and to keep in pace with her cool, bold and naughty classmate who is unfairly fair.

Cooped up in a home with a fair sibling, the dark child’s infancy is steeped in ‘racial’ taunts and equally insulting words of consolations from parents. He sulks and suffers inside his hell: his dark skin. Repeated comparisons to his fairer sibling conditions him to ‘resign to his fate’.

In course of time, the fair learns one thing from their bitter half.  The dark never band together and rise against the unfairness of the world. They lack the confidence to stand up and get noticed because of the countless insults they had suffered since their childhood. They learn the art of pocketing insults and blinking back tears in silence.  Their meek reactions become cries in the wilderness. That sets in a dubious master-slave relationship in the society. The fair and the dark. The Master and the Slave. The pretty girl who parts her legs and the boy who covers up his misdeed with a fluent talk in English know where to ride their fairness boldly into. They are the Masters of our world.

But on the other hand, the dark if confronted stumbles, falters, and succumbs even if it knows that it is right.

Like people, educational institutions are also divided by their skin tone. Be it a school or a college.

How can a school be fair or dark?

Tell me the image of a boy that comes into your mind when I say Loyola school or St Thomas school. How do you compare him with the idea of a boy from Chalai 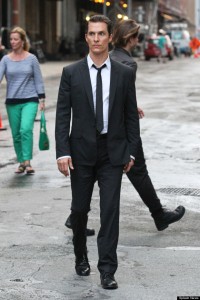 You know which one speaks English, and is fair and prim.

Schools and colleges which have a good share of this fair, English speaking, suave youth somehow become the icon of fairness too. The crimes committed by their students are dismissed as cute failings, while those lapses made by the students of dark institutions, where most of the downtrodden study, are blown out of proportion and brandished from the top of the house.

The Government colleges and institutions like where I work now are considered dark, given the huge number of students who come from poor background (obviously the dark people). Eighty percent of our students look like 80 percentage of Malayalees. They speak their mother tongue, they are dark; they come from villages, they are raw.

Surprisingly even if they have lighter complexion, it doesn’t help. They won’t get the advantage of that skin tone, as the skin tone of the college always overrides the skin tone of the individual student. So the moment you reveal you are from Attingal Government college, or Peringammala Iqbal College or St Xaviers, the image of a dark student, who speaks only Malayalam pops up in the mind of ‘the fair other.’

All rules of prejudices against the dark, deeply ingrained in the mind of the society, suddenly come alive.

You can tie anything on them, and the media and the general public are predisposed to buy the evil of the deviant dark without questioning. Be it mass copying or murder. The victim college, which has the same mind as that of the dark individual, knows from the beginning that it is an uphill task to prove it otherwise.

It fights its battle alone, and then retires into its private hell, sulking inside its dark skin.

Did I say media? 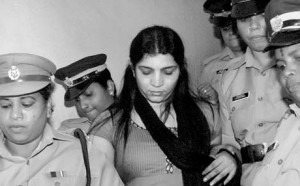 Oh, yes. Some of the frantic parents of our students tried in vain to bring media attention to the tragedy that befell on their kids.  Had the same misfortune fallen on one of the fair colleges in the state, we would have seen what hell’s fury is through television channels.

Nothing happened here. Nobody came to pick their bytes.

Even the online malayalees, who are vociferous in other matters, were busy jacking off at the image of the Solar woman with one hand and hurtling stones at her with the other – Malayalee’s favourite online game.

But here there was no scandal, no peep shows, no bedroom scenes, no sex bombs dropping from time to time important names who had slept with her.

The parents only had the story of 29 poor students, their children, who were debarred by the university. Most of them dark and not as photogenic as Saritha.

I called one of my students who studied in SN College long back. I taught her the first lessons in Journalism and literature. She is now working in mainstream media. She promised me three times on three different occasions to reach to us. When she stopped picking up her teacher’s phone call I realized how much she struggles to distance herself from her past, her old college and to slough off her dark skin.

So Manu, are you justifying malpractice? Not a bit.

But one thing you must know. Examination malpractice happens everywhere. In every college. Be it dark or light. We teachers come across suspicious answer sheets 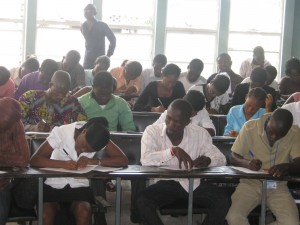 in valuation camps. We can report. But we know that if we make one error in our judgment, we send a girl, who can be highly talented right into Ramachandran textiles in East Fort as a sales girl. Some of those children are so weak-hearted that they won’t survive the humility. They end up their lives on one end of a rope.

As a teacher, I think a hundred times, before I take that call in my life.

Sir, give me a bunch of answer sheets from the fairest college in the state. I will circle enough words and phrases that point to the same crime, you allege these children with. The youth everywhere is the same, sir. They are a big pool of water.

You took one spoon of it from our side of the pond and wonder how dirty the water is. You say…

How dirty… the dark is.

Thou shall not covet another woman. You know that testament? Have you ever coveted another woman at least in your dream?
“Yeah, but it is quite human. The subconscious…”
Have you coveted or not?
“Yes. But even Freud..”
You broke the ninth testament. A grievous fault. You must be punished. Right?
“Yes, I committed that sin. And I know that it is wrong but…”
So you have confessed. You will be shot to death.
“It is just, I agree. But I have a doubt: Why didn’t you ask the same question to the one standing near me?”
…..
“Sir?”
…..

11 Responses to The Criminals who Mass-copied: Part II