You are here: Home » Featured » The Cat, The Sling and the Notepad

The Cat, The Sling and the Notepad

The writer takes you to one of the world’s most beloved hotels where legends are born. Drop in to it Long Bar which is considered as one of the top ten bars in the world.

Life can be peaceful without the Raffles if you successfully skirt around Singapore. But once there you cannot resist much when history beckons you to the 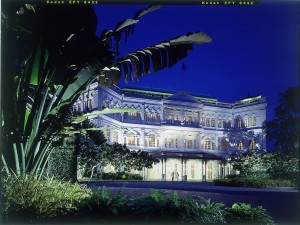 legendary hotel and its Long Bar. All roads in the city lead to the beach side building, now anointed as a national monument of the country.

Come to the Raffles, where the last of Singaporean cats was killed, where the legendary drink, Singapore Sling was born and died, where countless writers seek refuge in its bar whenever they suffer the pangs of creation.

Named after Sir Stamford Raffles who founded modern Singapore, the hotel fluttered into life as Beach House, a somber looking old bungalow in 1887. It was a humble beginning. But over the years the Raffles evolved into one of the world’s beloved Grande hotels in the world and welcomed innumerable celebrities, politicians, writers and royalty.

Today, you’ll find in its plush corridors, many spine-chilling tales, which add to the experience as you knock back a Sling from the bar.

The Raffles hits the headlines in 1902, when a tiger escaped a village show and sought refuge under the billiards table in the hotel. Some say that it was at the Long bar that it strolled in. Tigers were once a menace to the country; on an average 300 people were killed every year by the cats. The government ordered free shooting topping it up with rich rewards. But all that was all half a century ago. Now this cat which was hiding under the table was the last of the Singaporean tigers.

They killed the tiger, wiped off the race from the island but they could hardly help the birth of many strange myths and legends associated with the incident.

Another legend was also waiting on its wings. At the Long Bar. 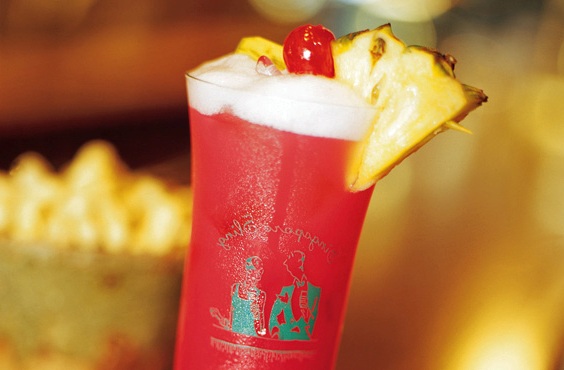 Experimenting with various liquids, Ngiam Tong Boon of the Raffles stumbled upon the famous Singapore Sling somewhere between 1910 and 1915. He was least aware he was making a fairy tale of a drink. It became an instant hit.

But sadly the recipe he kept secretly all his life went down the murky drains of history when he died.

Now even at the Long Bar where the drink was once born, you can only have a version of the original Singapore Sling. But experts now agree that gin, cherry brandy and Benedectine are the main ingredients of the drink.

At the Long Bar now, the bearer pushes at you six versions of the famous drink – Spring, Summer, Autumn, Winter, Tropical and Courtyard. Each version contains a surprise element for your palate. So in the Spring Sling, you’ll find a dash of Smirnoff Apple vodka; Courtyard Sling contains lychee liqueur.

Imbibe the orange-red Singapore Sling. The seat on which you find comfort is still warm with the ideas which great writers and thinkers bounced across the hall long back. Let your eyes peer back through the rich oriental façade engulfing you.

To the time when celebrities like Charlie Chaplin and George Bush had their wonderful time in the Long Bar.

Have you come to the hotel with those vague and annoying shadows which impatiently pace around in your mind to become the characters of your first novel?  Step in to Writer’s Bar at the Raffles. This is where Somerset Maugham sat quietly for long hours, overhearing the smatterings of gossips, the grist for his mill, which trickled in from the tables around him. To Maugham, Raffles was a symbol of “all the fables of the exotic east.” 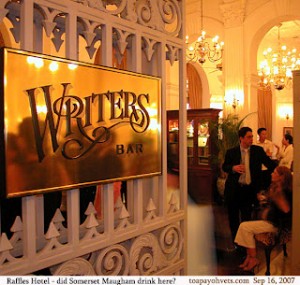 There sat Rudyard Kipling. Poor man, he was struggling to establish himself as a writer back then. Over the single malts which he held in his hand, he was just like you and I, brooding over a vague future and an insecure writing career ahead.

Joseph Conrad sat next to that chair waxing about the hotel as “the straggling building of bricks as airy as a birdcage.” Pablo Neruda, Hermen Hesse, Earnest Hemingway were some of the other writers who frequented the bar at the Raffles. As a testimony to those glorious days a few works of writers are put safely behind glass at the hotel.

So when you come, don’t forget to bring a notepad along. The walls in the bar are vibrant with rich memories. Sometimes over by a shot of Singapore sling you may suddenly grow an ear to them.

One Response to The Cat, The Sling and the Notepad