You are here: Home » Featured » Teacher’s Day Special: Confessions of a Bad Teacher

The writer admits that he is a bad teacher. First published in yentha.com this story created some ripples among the teaching fraternity a couple of years back. As today is Teacher’s day the writer feels it appropriate to introduce that old piece to his new audience.

Yes, I am a teacher, an Associate professor by the records. You can look at my appointment letter and salary certificate. You are convinced I am one.

See how those numbskulls jump to their feet when I pass and utter in fear: “Good morning sir, good afternoon sir, thank you sir…” I only nod back, occasionally, without wasting my precious smile, damaging my stature, reputation and salary scale. Since the new UGC package has been issued I’ve stopped responding; a smirk will do at a pinch.

No, I have always been so, I proudly smiled to myself.

For the last 15 years I have been maintaining a serious profile. The world respects me for that. You want to know what is silence? Come to my class. They don’t dare to breathe when I teach. As I drone on with the textbook, I could see eyes turning glassy, batteries running out behind them, eyelids struggling to get a foothold on the roof. But, with bated breath, they sit.

The characters of the play I teach, come, evolve, fall in love, hit their heads against villainies and commit suicide; but the poor students hardly know what happened when, until they get their hands on the guides at the end of the year.

Most of them go for tuition, why should I bother. “But what about the poor students in the class, sir, who cannot afford the tuition?” 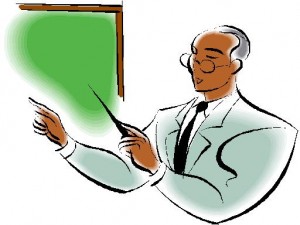 asked Thulasi, a young teacher. Inexperienced imp! I brushed her off with a contemptuous smile only a senior like me can afford.

See my expensive dress, my new Ford car, iPhone, the clubs I dwell, the scotch I take, the marriages I attend, the jokes I laugh at, the friends I regularly shed, the places my eyes usually rest at. I am a teacher by every inch. Here is the identity card I promised to produce.

Two years ago, I still remember that girl who showed the nerve to heckle me with doubts in a class. Mortified for a moment, I groped for impossible answers. Then I spat back, by mockingly imitating the queasy voice she had. The class laughed. When I saw tears collecting in the corners of her eyes, I could hardly contain the glee. That would settle the doubters.

I could stand anything but the meaningful coughs of boys and the equally meaningful chuckle among the girls. I glower at them. I don’t like them playing on the ground or making noise. I shouted at them when they came one morning with the idea of conducting a celebration in my department. “This is not a festival ground or your bloody home. Go and study. Think only about examination. Should I give you more notes?” I shouted. They shook their head in fear and ran away. 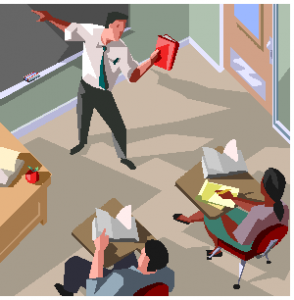 A mother broke down in sobs when I insisted on proceeding with the complaint against her daughter. Even the principal was sympathetic. “I am not a messiah to wipe out your tears. If you have problems at home, solve it and send your child here after that,” I barked. I saw traces of dark blue finger-marks on the girl’s cheeks. She hadn’t slept the previous day, as her drunken father went violent when he got my call.

You know, my little daughter is studying in eighth standard. When she grows up, I plan to send her to a good professional college–a place where she would get proper attention from good teachers. I want her to be a teacher like me, because this is the cushiest job in the world.

But don’t ask me why many of my colleagues complicate it. I don’t. You can use the same notes for your whole teaching career. So simple.

A teacher should translate the text, word by word, line by line. One common introduction–“This paragraph is taken from blah blah blah…” will do for the notes. I haven’t read a book since I landed this job, and why should I? “But Manu sir, we have a commitment,” Thulasi said. I cut her short. Stick your nose to your text. Do you get more salary if you talk beyond that in a classroom? That did her in. She had no answer.

But Thulasi has not changed a bit. I gnash my teeth when I hear girls laughing at her rotten jokes. I too strained to say a few, but my students didn’t know how to react. They waited for my command. (You know discipline is my word.)

I see students smiling heartily in Thulasi’s presence; to me it is bit contrived, I suspect.

“Manu, you have to change with the times,” advised a senior teacher. “Why?” I pooh-poohed the idea of conducting extra and co-curricular activities for students. I cited UGC rules defending myself. “I don’t have to spend a single minute beyond the stipulated time, got it?” I barked back. The students went back crestfallen. They wanted me to correct their articles for the college magazine in the evening. Why should I? 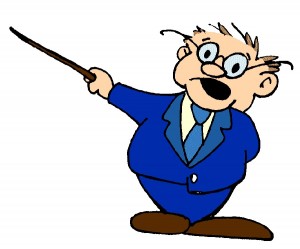 I hate my organisation which helped bring drastic changes in the syllabus. Semesterisation needs additional work, additional preparation, additional reading.  What the heck! It demands the teacher to be computer literate. All the texts I studied went in a poof, and now tell me what I shall do with the prepared notes? Who will buy?

Have you seen the new syllabus?

Nanotechnology, Horticulture, film studies, media writing… a cruel world has unleashed upon teachers like me. What shall I do now? Where shall I go? What shall I do with the computer?

A college is for teachers, not for the students, I said in a meeting. “No Manu, students come first. We have to look around and see the world changing. Our syllabi should reflect the cutting-edge areas of our subjects,” said a leader of my organisation. “And who will teach them?” I snapped back. “You must read and study them,” was his answer.

Nasham. I am a teacher, not anymore a student. By that time, Raman Pillai sir, who was facing the same threat came up with a solution, “It is easy Manu sir. You attend seminars, conferences, orientation programmes, refresher courses and symposiums to stay away from the students throughout the year. “But what about the portions? I asked. “That is what the guest lecturers are for. They will do whatever they are assigned to, without uttering protests, won’t they?” I nodded with a grateful smile. 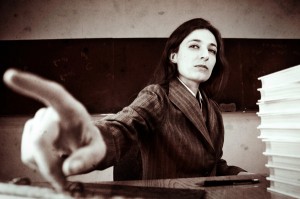 Meanwhile a frustrated Thulasi announced that she was going to write about the present state of teaching. That shocked us. I threatened her that we would throw her out from the fraternity if she lets any funny bone tumble out of the teaching cupboard. I have serious fears now as she only smiled to my warning.

If she leaks things to the press I will cut a poor figure. She knows my clout.  She also knows that a word against me would eventually pit her against the community. It is a taboo.

But, she is a cunning woman. So, my friends, I will stick my nose close to all the newspapers, magazines and online sites (especially a site called Yentha or now RRR), she could get her story published. I will scan her sentences through a microscope of an eye.

Manu has written 297 stories in Rum, Road & Ravings. You can read all posts by Manu here.
by Manu |
14 Comments |
Featured, Sane Ravings

14 Responses to Teacher’s Day Special: Confessions of a Bad Teacher