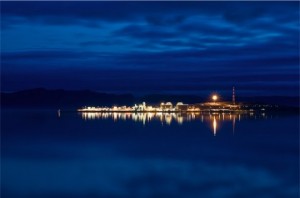 There is a charred book hanging in front of every kiosk outside the post office. Somebody has found a hobby in setting light to telephone directories.

When Bill Bryson checks into Haja hotel near the quay in this remote corner of the world he doesn’t exactly look out for such detours. He has come to Norway to see the sky. Not that Bryson, a travel writer, has seen skies enough for a lifetime. But all skies pale into insignificance before the magnificent bowl of space over the town of Hammerfest.

Come hither and take a ringside seat to the watch the ‘lights.’

Hammerfest is an agreeable enough town – fine to be enjoyed as a tourist but monotonous to live as its inhabitant, the writer observes. We find shipping offices, a large

police station and a post office, in front of which there is a row of telephone kiosks. If you have nothing else to do you may stand here and stare at the charred directories hanging outside, wondering why.

Christmas lights hung at regular intervals welcome the writer to the main street of Hammerfest. A closed movie house. Closed shops. Absolutely no sign of life. Bryson’s descriptions of the desolate and bleak landscape bring to mind the deserted village in Keats’ poem, ‘Ode on a Grecian urn’.

“And, little town, thy streets for evermore
Will silent be; and not a soul, to tell
Why thou art desolate, can e’er return.”

That night, Bryson is aroused from his slumber by a roaring voice. He crawls towards the window to see what is outside. He catches a surreal landscape through the window, set alight by lightning, snow swirling about madly like a plague of insects. In the police station two squad vans marked ‘Politi’ are already buried to their roofs.

Bryson takes us out for a walk in the morning. The streets are still deserted; snow piles in the doorways; streetlights sway and flicker in the gale, “throwing spastic shadows in the snow.”

When Bryson talks about a wind which drives bitter particles of ice that sear his cheeks, why does my skin crawl? Why do I, sitting continents away in a sultry land, cheated by a monsoon, shiver as he waxes about a road clouded in snow?

Suddenly from the gale the writer picks out a figure. He makes a cheery greeting at it. The figure passes without looking at him. Bryson meets another couple. He fails once again to flick any warmth in the people of Hammerfest against these icy gales of the land. 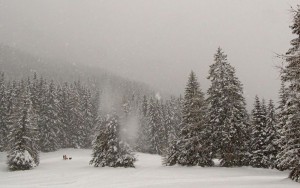 Bryson spends the evening in a bar, nursing Mack beer, watching a couple of men wrapped in reindeer coat at a distant table. They sip theirs in silence, staring into space. Today is New Year’s eve; but this is more a funeral house than a bar.

At 11:30pm Bryson leaves the bar for his room. Outside he finds every window in every house blazed with light, but he can hardly pick up any sign of revelry from within. When Bryson is just about to get into his room at midnight, he hears the doors open all along the street behind him. He turns around.

Bryson sees people, the whole of Hammerfest, rolling out of their houses, bursting into loud cheer.

Soon the sky explodes into a brilliant display of fireworks welcoming the new year. The camaraderie is all-pervasive. Against the sudden dazzling array of exploding colours and loud pops of crackers few notice a pale flicker at a corner of the sky.

Exactly after 30 minutes batteries run out; the people of Hammerfast return to their homes, sleepy-eyed. The place could be wondering why it was woken up, and why it is suddenly left alone wide awake. But Hammerfest knows how to snugle back to its deep wintry slumber in little time.

The writer walks through the alleys with his eyes fastened on the sky. He wakes up at midnight, crawls towards the window and peers out into the bare sky. He sips his beer from the bar, his eyes locked on the empty sky.

He is impatient; unlike the unwearied earth swathed in an even afterglow, which also waits.

In waiting Bill Bryson now finds new dimensions of time. He spends hours unlacing the boots, lacing them, unlacing them again until both the ends have precisely the same length. He has now time to arrange and re-arrange the contents of his wallet to death. He has time to deal with nose hairs.

On the 16th day of his arrival Bryson notices something up the sky. He is coming back from a coffee shop. Then at one corner of the sky he sees a translucent cloud of interesting hues– pinks, greens, blues, purples. It glimmers. It swirls. Slowly it spreads across the sky. He stands transfixed. Bryson finds an oily quality about the cloud – “like the rainbow you see in a pool of petrol.” 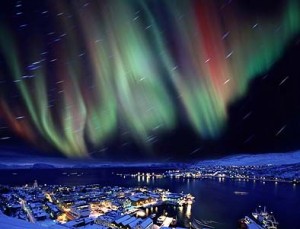 Northern lights spook you out sometimes, Bill Bryson warns us.

They can seem to come out of the sky and fly at you at enormous speed as if they are coming for the jugular. You have a white handkerchief? Hide it! Many locals believe that if you wave a white paper or a kerchief at the lights, they will come and take you.

Bryson gets more of Northern lights in the evening. The whole sky lights up in an eerie luminous green. He sees them tripping down like falling stars. Then they spin languorously. Sometimes a radiant green light would flash in one corner of the sky, snagging the attention of the writer, then disappears and appears at the back of Bryson, “teasing me.”

Poor Bryson is constantly turning and twisting his head. 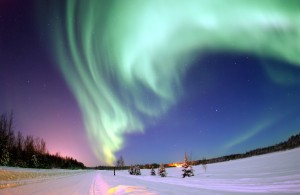 Finally satiated with brilliant hues that blast away all the wintry blues the writer now wonders how all this happens in such absolute silence. No crackles. No humming.

Looking long into such spectacular drama that unrolls so mutely in a magnificent sky, you may sometimes lose your bearings. You will feel you have more with the luminous clouds than a cold earth which has now diminished into distance.

You will take your little boat on the resplendent green waters which churns about madly and set sail for the promised lands.

(In Armchair Journeys the writer latches himself on to some great writers and their writings to experience the world outside. He bids adieu to his family, sprawls himself on the armchair in his room, flips out a travel book and disappears. This time he reads Bill Bryson’s  travelogue ‘Neither here Nor there’ ).

Manu has written 297 stories in Rum, Road & Ravings. You can read all posts by Manu here.
by Manu |
Leave a comment |
Armchair Journeys, Featured