You are here: Home » Featured » ‘Return of the Raver’ – Sabin Iqbal

‘Return of the Raver’ – Sabin Iqbal

There were two bearers at Gins hotel, Plamoodu by the names Sabin and Manu  until recently. 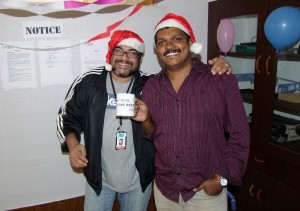 Sabin and I, friends for 15 years since we met at the Press Club, went there not only for an occasional sip after long hours at desk, but we also liked the concept of a Sabin and Manu serving  drinks to Sabin and me, the editor and consulting editor of yentha.com. “Sabin,” I hollered at the poor bearer,  “one repeat here,” deriving a cynical pleasure of making a Sabin work for me. “Manu, clean the table,” I cringed when it was Sabin’s turn to yell.

We had a great time as friends until we ran into rough patches in life a year ago. As a writer, I am yet to see one with better skills and tools as an editor than Sabin in the media field. Yet to see a better friend too. Sabin is so passionate in language that anyone who goes near him would be sucked in by the light and heat emanating from his fire. He is irresistible in all sense. If anyone has influenced RRR in its language and style, you don’t have to look elsewhere for the reason. We had shared common passions, common wounds, and common dreams. Times have changed, our relationship too. Still, it would be impossible for both of us to erase from our minds the glasses we clinked, the jokes we exchanged, the words we shared, and the roads we traveled.

Our friendship had always been a tribute to the language.

(Recently I went to the Gins hotel. Both Sabin and Manu had left their jobs)

Here’s Sabin talking to the readers of RRR:

Return Of The Raver 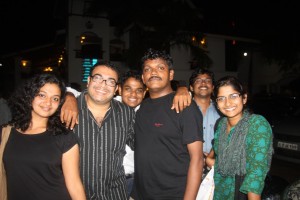 It was a night when everything went awry. I haven’t cried as bitterly as I did in that ghostly night. I am not ashamed to tell you that I sobbed like a boy in my car, parked on the roadside.

Who says men don’t cry? Or, gulping down tears is the sign of manhood. I wept in the privacy of my car as I knew something had broken.

Some significant strings of a long friendship that had weathered many storms and survived many grey winters had snapped.

Both of us knew we were not boys any longer to be just fair-weather fellows but, like gladiators, we had to face adversities chin up, and move on.

We first met in mid-90s at the Institute of Journalism at Trivandrum Press Club when we were just stepping into the world of news and words. And, we were engaging into a friendship wrapped in jokes, laughter and wry, subtle humour that often helped us forget some private sorrows.

Such a long journey!

What strings us together, even now after the unexpected, is a common love for words. We both are incorrigibly in love with writing.

I don’t know how a surgeon feels when he is about to cut open a human body but when I handle Manu’s writing I tread gently, tasting each word, savouring its flavor, and holding each sentence like a fragile bone, lest I might break it.

But, I love editing Manu’s copy. It challenges me as an editor, sharpens my skills and rearranges my perspective. For a year, I haven’t had the privilege. 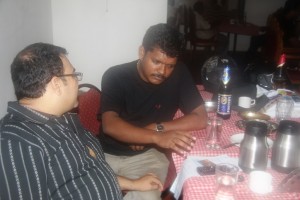 Rum. Road and Ravings is a Lara-ian effort. Like the little Trinidadian, Manu is tireless in his effort. Like the southpaw, he is elegant and goes on till the cows come home—an achievement not matched by many. Like the princely bat, Manu is passionate about what he does.

I remember reading about an old American journalist giving a few tips to a bunch of young journalists in the newsroom. He said: “The secret of lasting long in the profession is the love for it.” The old man told them that journalism would not make them either rich or a celebrity but the secret, he reiterated, is the love for it.

Crisscrossing Kerala and checking out the ‘Kallu shaps’ and restaurants and then writing about them without losing any element of flavor will certainly not make Manu a millionaire. All these writing may make him popular but not a celebrity as Suraj Venjaramoodu.

But Manu goes on and on because he loves it.

It is easy to call it quits. It is the easiest option in any crisis. But Manu is growing from strength to strength, and it warms my heart, and I pump my fist under-desk, as we used to do years ago. 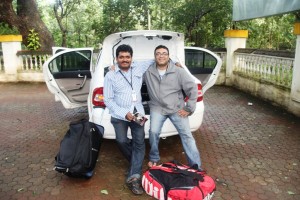 To his readers who haven’t met him yet, let me spill a few beans. Manu is a taciturn—a man who given a choice would prefer not to talk. But challenge him with a tough story, you would see him transform into a wonderful storyteller who seldom misses ‘the name of the dog’ or ‘the mole under the nose’. When we were together at yentha.com, we had done some brilliant stories together. What I see in RRR is just the glimpse of Manu as a story chaser.

He can do better.

He knows about every shack in town, and unless you are consciously against it, he will woo you out of the house with a mellifluous description of the piping hot kappi and its soul-soothing aroma. You might realise that the shack has wound up months ago, but he just wants that ride under a spooky moon!

Dangers of writing without a break are burnout and declining quality. It is near impossible to keep the quality always in the top drawer as writing, like any other job, often sucks. Unlike many think, there is no muse sitting beside a writer nudging him with adjectives dripped in honey and tears or rubbing his aching back. Writing is a terribly lonely affair, and mostly painstaking.

However, you cannot be a successful writer unless you are ready to pay a price; unless you are ready to slog it out in the dead of night or at the crack of dawn. And, the secret of good writing, as they say, is rewriting. Now imagine how many times Manu has to go through his draft. He is not the kind of writer who hits the sack after a sloppy first draft. The Manu I know is someone who shuts himself up in his study and doesn’t come out until he has a fairly decent first draft.
I guess he is the same still.

RRR is Manu himself—his love for the sensual; his passion for the whistling wind, gurgling springs and the winding wilderness; and, his uncanny talent to tell the intoxicating tales of spirits.

A word of caution. Beware of the weariness.

But I won’t stop on a warning note. 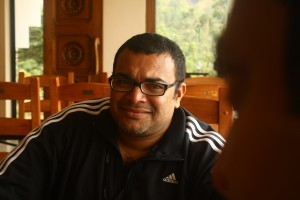 Manu was one of the first among us to venture into online journalism and writing. His column, Freekick, in Kerala Kaumudi’s online edition had a number of readers. And, it was there he began ‘assassinating’ me online. A trend that he hasn’t dropped, I guess.

RRR is Manu’s extended classroom. A dedicated teacher like him cannot but teach. And, I am sure those who worked with us in our editorial team would not forget the writing workshops he had done. The ‘brushstrokes’ are still handy though few of us is an expert like him.

Remembering the rum we had together, the roads we had taken together and the ravings we shared, I am sure RRR will make the rumbling into a roaring success. And, my mate Manu will see his ravings go wild!

5 Responses to ‘Return of the Raver’ – Sabin Iqbal