You are here: Home » Featured » Report from Mangobaag 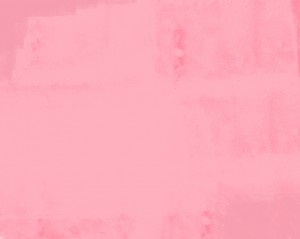 Long back the king had gifted a mansion, where the bazaar is situated now, to his concubine, who was young enough to be his granddaughter. On full moon day the king would come to the king-sized cot in its courtyard, which had pink sheets spread over it and pink pillows lying on it, with pink bowls of fruits and camphor lit in pink-coloured pots lying near it.

The wait under the canopy of star-spangled sky would end when his concubine, a Cinderella dipped in pink, tiptoed seductively to his bed.

They had only the moon for a bed lamp when they made love. Then one day the king fell dead when he was above her.

Right under that moon which they had for a bed lamp.

If you don’t get the picture of a dead king lying above a woman in a pool of pink in the moonlight, I will show you a dead reader too, straddling over this page, reading this sentence.

Anees Salim’s debut novel ‘The Vicks Mango Tree’ is laced with many such evocative gems which fascinate travelers like me.

This time I needn’t have to pack my bag; I only have to open a book to set out for the journey.

Tell me, what else are writers for! 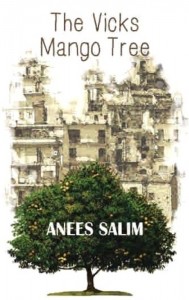 They must create. Places. People. Moments. Movements. Thoughts. Philosophy. All the time they talk.

Tripping through the pages of a work, strange trap doors must open up amidst words, sucking us deep into a place which we have hardly seen or imagined.

So when Anees settled down to construct Mangobaag, a place where his characters would play out their lives, I listened attentively. I am a travel writer. I needed to know the tricks of a fiction writer when he constructs a place brick by brick, one upon one – a painful, laborious point by point work of a pointillist artist.

In the opening pages I landed on an alley which runs to the back wall of Sapphire cinema and totters to the other until it merges to the Dr. Abid Ali road. This will be where I will be until the last word.

Then the larger picture emerged.

The municipality of Mangobaag has the shape of a mango. There are slums, marshy lands, huddles of concrete blocks in it. If you look closely you can see the greenery on one side of the fruit being munched by the teeth of progress.

But like many unique places in the real and fictional world, Mangobaag is not to be savoured when it stands still. You must catch it as it moves (A valuable tip to travel writers in the world. Catch a place when it moves).

The novel is laced with journeys along Mangobaag undertaken by different characters under different situations. Each trip not only puts the road more in focus, but it also reveals alleys, past events and dimensions of characters, all hidden until now, branching away from the ones we see.

Teacher Bhatt’s trip to the Bombay Printers, the political processions, the funeral march, Aladdin’s frantic flight taking him right into the ‘eager mouth’ of Ustad, Raabia’s 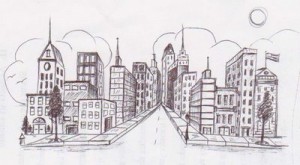 many trips culminating in that return journey from a hospital with a husband whose heart was ‘shamefully,’ fit and fine reflect not only the place, but also the intricate thoughts inside characters who are caught in their terrain

In fact the place and the character in Anees’s novel are two mirrors held against each other. The reflections and their resonances recur infinitely throughout the novel. Try taking the character from the place, you’ll know!

The Bava House which stands in one end of the alley is in the traveler’s reading, the hero of the play. It seems to me like the castle of Transylvania bequeathed to his victims by a Dracula who had long left for England: “The flight of dark brown stairs, worn to a shiny tan in the middle” with the landing windows as the only source of light, climbs as far as the bachelor’s floor where a quarter of the drama happens in chiaroscuro.

A highly evocative purple door in Bava house which remains closed most of the time holds all the tension in the novel.

You find this world reeling around you? You want to get some grip on the terrain? Half the soul of a place lies in the people living in it. Meet them, traveler.

He is like molten lava disappearing into the chinks and crevices of your mind, and then at the end of reading when you try to scrape away the solidified stuff it would come off as a whole with your own self molded in it.

He is every inch Mangobaagian, as well. Scratch him you’ll get the place.

Her resistance to Hindu rituals and songs, which are alarmingly engulfing her, culminates in her obsessed finding that her husband during love making synchronizes his exertions with the rhythm of the hymns.

You take the element of humour out of the story; a quarter of the charm of the place is gone.

Anees keeps the horn of humour quite near the steering and like a child imagines obstacles for an excuse all along the ride. “Thinking about your old flames?” My wife caught me smiling many times while I was reading the novel.

I like the details piled upon details in the novel, defining Mangobaag and its people. But I like the Zorro-like swishes with the blade that Anees makes throughout the story, more. So casual, so precise.

“The first thing that he noticed about Ms Seth was the smallness of her breasts.” As a puritan travel writer I might also have noticed breasts of many sizes, shapes and coverings, but let that point go by a thousand times.

Why wimp out? I must lower my ‘moral science’ and speak for the eye – A post-Anees self advice.

There is Xanadu, the palace in Mangobaag with its copper coloured woods and ducking stool suspended from a pole hovering over a pond. There is the Malgova Central Park for morning walks. There is the bathroom in Raabiya’s house where pilfered letters can be read. There are spaces within the space, wheels within wheels. 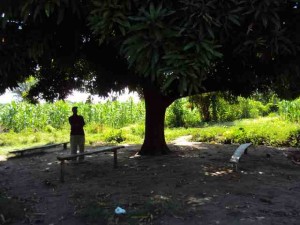 But they all hum in harmony to make the symphony named Mangobaag.

Though it is remotely connected to Delhi and Buckingham palace and resonates with the country-wide struggles against the Emergency rule, all lives depicted in the novel are caught in a vortex with the place as the centre.

Even Miss Myna, who was once “the Hemamalini” of Teacher Bhatt’s teen days, tries to get back to the place in vain. Her last wish was to taste a mango from her childhood, a mango which tasted like vicks. A local club volunteers to help but she forgets the name of the alley: Mangobaag.

Vicks Mango tree! My students asked me what that is.

Sorry. I am here in this place just as a traveler. I must not spoil the suspense of a drama I enjoyed watching here.

So catch me at Mangobaag, under the shades of the Vicks mango tree.