You are here: Home » Rum » Culture & Etiquettes » Raking up Death

The air is permeated with the smell of blood and death in a mount somewhere in Palakkad. Welcome to the abode of Malaippothy. 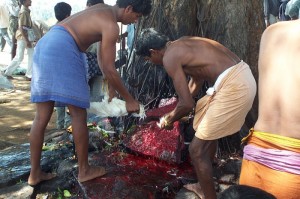 When the annual festival arrives, people from all walks of life gather on the holy mount with pots of toddy and live chicken to appease the Malai Bhagavathy(Malaippothy). The poojari will rip the head of the cock that you have brought over  a stone idol now soaked in red. Now settle down somewhere in the mount and prepare a chicken curry in obeisance to the Bhagawathy.

Chase its heat down with the cool toddy you have brought – the Bhagavathy is appeased.

I met a lot of my students quaffing down toddy on the holy mount as if it was milk when I went to the holy mount. What could I do! This was state sponsored drinking. They had come with their parents and were knocking back big pots of toddy promptly refilled by their wards.

Wouldn’t it be sacrilege to say no to a ritual?

Alcohol and rituals are intrinsically connected in many cultures. Take a bus to Parassinikkadavu Muthappan temple in Kannur. “Mashe, no need to arch your brows,” my student Vijeesh was a bit hurt at my insensitiveness to his beliefs when I went to his home. “We have to take it to please Muthappan.”

I am no stranger to it, my dear.

In south Kerala we have a custom named ‘Vanmuri’. On the 16th day after death, the relatives and friends of the deceased gather in the departed man’s house to offer him with food and spirits he once relished.

As the poor man who had died could take only a little from the bottle the mourners polish off the leftover drink, piously in his memory.

Guys…you  fed up with these customs and think them remote?

Come with me to the Balkans, for a change. You will be welcomed at every house with a fruit-based drink with a generic name, Rakia.

Rakia is almost like our arrack, which can virtually be distilled from anything which has a bit of sugar and something ‘suckable’ in it.

So if you’re in Serbia and Bulgaria, it is macerated plums which are used at optimum point of ripeness and distilled by gentle boiling in large copper pots which come as Rakia. Of the different types of rakia Slivovitz made from a particular variety of plum named Madjarka is the most popular.

As far as the drinking habits are concerned, I suspect that the Balkan people have a lot in common with us Malayalees. Festivals, cultural functions and rituals have become handy excuses for them also to stay drunk round the year.

Be it a wedding ceremony, a funeral service or a birthday party, Rakia is the first in the guest list. 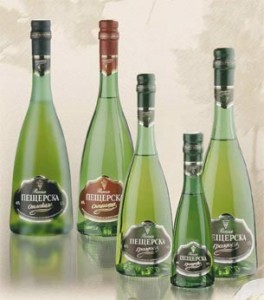 So you would see the bride’s father going around from table to table at the wedding banquet helping the guests with more and more Rakia. If you want to toss in a bit of Eastern Eurpoopean Kitsche to your wedding, order a few bottles of Slivovitz from Bulgaria or Serbia before you tie the knot.

Perhaps you wouldn’t, especially when you learn rakia’s association with death.

In eastern European burial services in the Balkans the mourners are directed to form a beeline to the gates of the cemetery at the end of the service. They will be given a piece of dry bread and a glass of rakia. With tearful eyes they would let a few drops fall into the consecrated ground. “May God receive this for him,” they mumble and then proceed to finish the remaining drink in one go.

The Balkan firewater with around 60% abv(whisky has only 40% abv) is sure to draw some bitter emotions during the funeral service.

Perhaps it was due to its association with Death, that Bram Stoker had reserved it for a crucial time in his celebrated work, Dracula:

“The driver said in excellent German, ‘The night is chill Mein Herr, and my master the Count bade me take all care of you. There is a flask of slivovitz underneath the seat, if you should require it.'”

Jonathan Harker is offered the Balkan drink while traveling to meet Dracula for the first time.

The atmosphere is set. In a bottle of rakia.