You are here: Home » General » Esperienza Exotique » Raisin the perfect

There is a 62- kilometer stretch somewhere deep in Spain which is bordered with terraced vineyards, and speckled with traditional drying beds of grapes. Back in the 19th century travelers stood there in wonder as they saw those fine pebbles drying in the sun.

They had only to taste to taste them to anoint Muscatel raisin as the emperor of raisins in the world.

El Borge, that beautiful village situated 28 kms from Malaga town on the scenic ‘Route of the Raisin’ soon became the capital of raisins. The best of those crumbled gems, the Muscatel raisins called Malaga are harvested in the village.

The Route of the Raisin. Come to Andalusia and follow your nose which picks up a sweet scent along the road from Southwest Axarquia to the foothills of 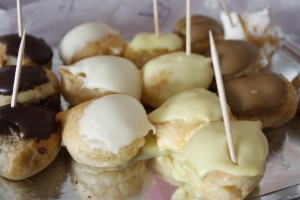 Montes de Malaga. The aroma reaches its crescendo soaking even the Mediterranean breeze, when you reach El Borge.

The grapes which grow on the terraced vineyards shy away from mechanical means for cultivation and harvesting. The fruits for drying are trimmed by hand. But not all.

Have you ever tasted the sweet, dark Malaga wine? Thanks to an extreme climate (scorching heat and freezing cold), the white grapes produce one of the sweetest drink in the world. Pedro Ximenez, the predominant variety of Malaga wine is made from the raisins born here.

Sip the Malaga wine to wash down the migas (spicy and crunchy fried bread pieces), paella and other Spanish gastronomic delights on offer. And forget that there is a home somewhere waiting for you to come back.

Remember one thing. Catch the place at the right season when the beautiful countryside ripens inside out. 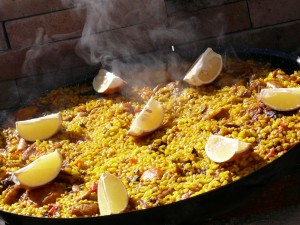 Come September, the serene village of El Borge bursts on its seams, as about 10,000 visitors from various places join the raisin fiesta called, Dia de la Pasa or the Day of the Raisin. Roads will be decorated, stalls offer samples of the local produce, guides take the visitors to the 500-acre vineyards, artists entertain you with traditional skills, dances and music which continue throughout the night.

Pull a chair to one corner to catch them all. Indulge your sweet tooth on the ice creams, desserts and wines all soaked in the spirit of Malaga raisins.

Manu has written 297 stories in Rum, Road & Ravings. You can read all posts by Manu here.
by Manu |
Leave a comment |
Esperienza Exotique, Featured