You are here: Home » Featured » Poetry in a Night Train: A musing in two parts

Poetry in a Night Train: A musing in two parts 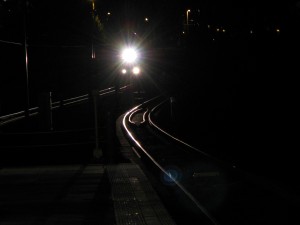 I’ve read the same poems at home, but there is something in a pitching train that slips words deeper and deeper into the mind. With every jolt. Chugchugchug… Perhaps it is the nip in the wind. Perhaps it is the shifting scenery. Perhaps it is the beat of the wheels. Sometimes, yeah, you won’t believe it but I have seen it happening, a place yet unknown would suddenly open up like a clam shell, or a closed fist between two neighbouring words but only for a moment. Chugchugchug…

It all happens in a poem.

I take my eyes from the page and look outside. The slow life – a cat on a peach wall licks its paws clean, amidst the heart-shaped leaves of a sprawling banyan tree, bats, thousands of them, dangle like black, overripe fruits,  temple bells make a touch-and-run. Chugchugchugchugchug…

A train is on a vantage ground with a handicap. You get all, but you won’t get it enough.

One scene as I bow to pour her a coffee… That is how poet William Stafford begins his poem. He is pouring his girl a cup of coffee in a train when he catches something outside the window, passing. He continues and pours cream into the coffee.

Still there is indeed a break, a cleft, a beat missing :

One scene as I bow to pour her coffee: – 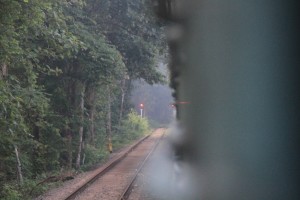 Three Indians in the scouring drouth
Huddle at the grave scooped in the gravel,
Lean to the wind as our train goes by.
Someone is gone.
There is dust on everything in Nevada.
I pour the cream.

Between the coffee and the cream, someone has gone, three Indians huddle around the grave, lean to the wind – then dust! The poet who pours the cream is not the one who poured the coffee. In the blank space, he witnessed something, however momentary that spectacle is. A huge chasm yawns between two innocuous acts, seamlessly connected otherwise.

How transitory such moments are to us! How blind most of us, travelers, are to them! Still how deeply and ironically such transitory scenes paraphrase our own lives!

Poet Bronislaw Maj knows what those women could be talking about:

Far away, two dots: women in dark wraps
Coming back from church perhaps, perhaps one tells to another, some common story
Of sinful lives perhaps – her words distinct and simple…

Then he reminds me to treasure those images forever. But why, I ask.

The sun, ploughed earth, women, love, evening, those few words
Good for the beginning, keep it all –
Perhaps tomorrow we will be
Somewhere else together. 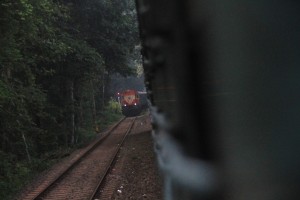 That stopped me in my tracks. I took my eyes off the page and peered out into the night. I remembered how I once caught a girl who had come out to her balcony in a distant house (I could hardly see her face) when the train pulled into a field just outside a station. I was reading the same poem. I was now looking at the silhouette of a girl. Would we meet again somewhere in life, I wondered.  Would we then remember we had met before in a night long ago, I in the train and you tying up your hair into a bun, yawning on your balcony, then mid-yawn you caught my eyes watching you and stifled your yawn suddenly? Would you then remember that for a moment, as the train passed, there was an emptiness I might have left in the form of a dark rectangle over the rails?

Oh, had I but a moment more to etch the details of the girl on the balcony in my mind! Eamon Grennan captures this predicament beautifully:

Perhaps if she stood for an hour like that
And I could stand to stand in the dark (alas, the train lurched forward after a minute)
Just looking, I might get it right, every
Fine line in place: the veins of the hand
Reaching up to the blood-cord, etch
Of the neck in profile, the white
And violet shell of the ear
In its whorl of light, that neatly
circled strain against a black
cotton sweater. For a few seconds
she is staring through me… 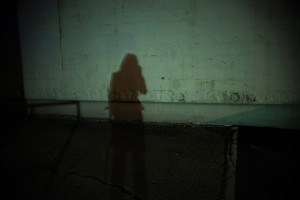 Eamonn knows what remains when the delightful sight passes:

Already, even as she lowers the blind
She’s turning away, leaving a blank
Ivory square of brightness
To float alone in the dark, the faint
Grey outline of the house
around it.

A blank ivory square of brightness, a vivid emptiness, a searing void, a presence of absence! A phantom limb that refuses to believe it is only a phantom limb! That square of empty brightness floating along in the darkness speaks eloquently for every love that flew out of the window in my life (Had I too left such squares or coffee stains in other places as well! Who knows!)

The long road of life could be dotted with such little packages that we never pick.  Our emancipation perhaps lies in them, our Gods too.

One Response to Poetry in a Night Train: A musing in two parts