You are here: Home » Featured » Men in Musth – Part II

Read ‘Men in Musth- Part I’, before you come here. In the second part of ‘Men in Musth,’ RRR presents some of the usual characters it has come across among the middle-aged men in Kerala.

LV or The local Valsyayana

The master, the assumed authority on all things women, the LV is the natural leader of a gang. 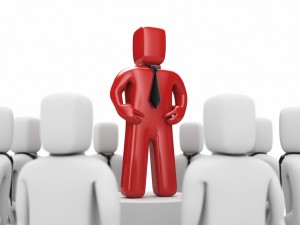 n women weigh in gold among among his friends and are quoted widely. Whenever a new bevy of women – airhostesses or nurses – move into the neighborhood the members rush to the master for tips and predictions. Only LV has the expertise to interpret the body language, shapes and features of a woman and tell which cherry falls with the wind, which needs a little shaking.

He gifts sleepless nights to his young listeners by declaring that every woman will trip in course of time. You only have to be there to catch her when she falls.

(The fools never think that if every woman is fallible, no man, including LV can ever leave his home peacefully.  But you cannot ask questions in a story).

NB: He may be the Valsyayana of the by-lane, giving free classes to his friends on how to give pleasure to a woman, but at home, an LV is modest; he keeps his light under the bushel; his wife may live and die without ever realizing that she has been sleeping with the greatest sage of sex for a whole lifetime. 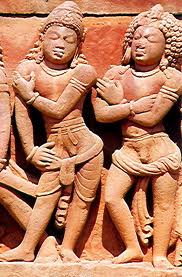 They’re the hoi polloi of a gang, an LV’s dutiful followers, his ardent fans. Like the planets, they don’t have any light of their own, but are happy reflecting the wit of Valsyan. Their only role is to roar out in laughter every time the master cracks a dirty joke. They suddenly go silent along with LV when they spot a girl walking down the street and assist the master in stripping her naked with their common eyes.

Very serious students of LV. Rather than poring over a woman who passes by, they study their master’s eyes to learn where to look at on a woman. It is Arjunas’ job to reconnect LV back to the story he was regaling them with before the girl came: “Chetta, ennittu avalu enthu cheythu? (What did she do to you then, bro?)”. LV is flattered. 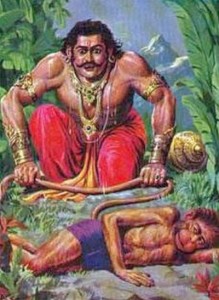 The fat guy who believes that his six pack is doing rounds among girls in their private talks. He never buttons up the top part of his shirt, so that the moment a helpless girl stops him and asks for directions he launches one hand inside his shirt to tug at his grey hairs or to promptly start a frantic chest-rubbing session.

He may have an advantage over others in the gang including LV with his strong muscles initially, but the big fat man of the gang is continuously drubbed and cut to manageable size by the scrawny, pot-bellied, bald and shrewd Valsyayanan at the end. Women fall in for fat only at a mutton shop, the giant is constantly reminded of, until he gets convinced. Finally he buttons himself up right up to the stiff collar and gives up gymnasium in order to grow a sexy paunch, like that of LV.

Order is once again restored in the gang.

In Mahabharatha, Duryodhana draws aside his lungi, exposes his thigh and politely asks Panchali to take a seat (In the final act, Bhima who couldn’t understand the joke smashed the seat into two pieces, ending the war of Kurukshethra).

Duryos who wear lungis nowadays do not have to draw the curtain aside; they fold it up far above their knees, so that the seats are exposed. The urchi-kurchi-purchi scratches they make on their thighs are vociferous invitations for the fairer half to try them. Men need not apply.

(The modern-day Duryos have effectively replaced the lungis with the more convenient short trousers). 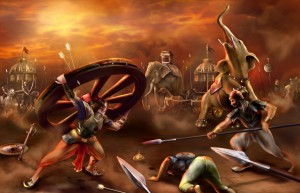 I met a few middle-aged men who had barged into the cyber world. A few survive. But a majority of them were last seen struggling to find a way out of the mess.

One in Calicut was all praise for the belly-button he saw in a flash through the neighbourhood window, texted a lightning compliment to her, but in the hurry the missile veered off its course (a mix-up of phone numbers) and turned right back on the launching pad, hitting his own home.

To his poor father-in-law, 75 it was a new experience: no body including his very old wife had ever said anything special about his belly button, until this sms (The man doesn’t have his son-in-law’s other number)!

Another guy spent hours feasting his eyes on a pair of voluptuous thighs during a video chat. He was working on it when he spotted some familiar birthmarks on them.  “I have seen them somewhere,” he shrieked in surprise. Poor man, Abhimanyu soon realized to his dismay he was enjoying his own beauty.

He flung the web cam to the Arabian sea.

The respectable old man in the company who blushes and protests meekly at the steaming conversation: “Hey onnu chummathiri. What are you talking about! I am going if you continue with this dirty talk.” But like the characters from Beckett’s ‘Waiting for Godot’ he never moves from where he stands.

Dritar won’t go anywhere until he laps up the last word on woman that dribbles down on the floor. He will be dutifully present next day also with the same coyness. He claims innocence like the blind king and wonders how can he be blamed with those protests and blushes, he drops in from time to time. 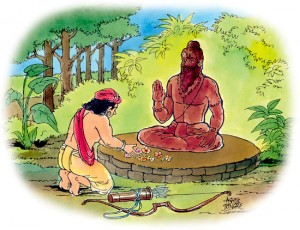 Most dangerous in the group. They don’t talk much in a company. But in the sidelines, away from the attention of the master, they visualize and make a lot of mental notes. Once they retire into their dark world, they begin to apply what they’ve learned from the master. I strongly believe that the minors involved in recent rapes were misled by perverted old men who had injected poison into their minds. Their thumbs should be marked for felling. Along with the necks of Valsyayanas.

So my young friends, they might continue to put all blame on your new ways of life, your lack of respect, your culture copied from MTV. Don’t get blanched. As the one who straddles two generations I know one thing: you have only a few things to learn from them;  ultimately you must draw the spirit from within, and form new values.

No laws can ring in a new dawn in the society, until a generation of bold young boys walk in, holding the hands of women whom they love and respect.

RRR will be right here to welcome the brave young world.

Last week, Varghese achayan called me. I told him that I’ve 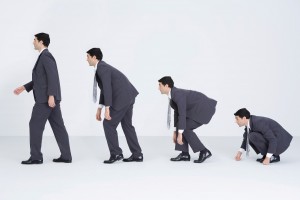 reached 40, and nothing has happened.

“Manu, 40s are peanuts before the 60s. This is where life begins. This is from where you have to look at women. Oh, women! When can they tire me out, Manu! You heard? The house opposite has been rented out to airhostesses! Anything can happen now.”
“How is your granddaughter, achaya?”
“Oh, she is fine Manu. I don’t have any time to talk now. My friends are all waiting outside. We are going to meet the girls right now. I must hurry.”

When do men actually begin to grow old and respectable?