Thirty years ago today my brother (who was only 14) decided to send a message to his teacher he could never forget. He hanged himself to death. Could he teach his teacher the lesson he wanted to teach? His brother reports from home (This story was first published at yentha.com 4 years ago).

The run-up to a revolt

There were signs all over the home. On the rose plant you did not water for a whole week, on the crumbled papers in the wastebasket in your room, on the sudde 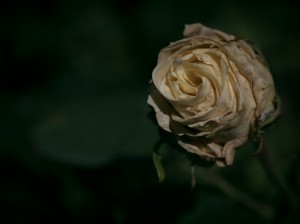 n hug you gave your ten-year-old brother who suspected another ruse to cheat him in a game, on the long watery gazes you had on the empty walls and the low burning fire in our gas stove, on the sudden magnanimity of gifting your text books to your friend…

Only we, lousy players – too blind to see a pattern emerging in those incoherent acts – picked up a few broken shards of a heart and wondered what.

We couldn’t read death in your pathetic smiles and watery eyes.

“You must give my guitar to Deepthy (our cousin), my cycle to Bapu(another cousin). Give my brother a good tuition…He (referring to this reporter) will study and one day make you all proud. ” You wrote us a long note with trembling fingers.

In the death note we found in in your pocket we learned you were not exactly alone in your last act. Two of your friends should have accompanied you. At the same time. From their respective homes. Three deaths! What sensation they could create, you thought. The teacher who hurt you could feel pathetic.

Well, if you are listening brother, you went alone into the ring of fire that evening. Almost like Abhimanyu.

This is what happened. 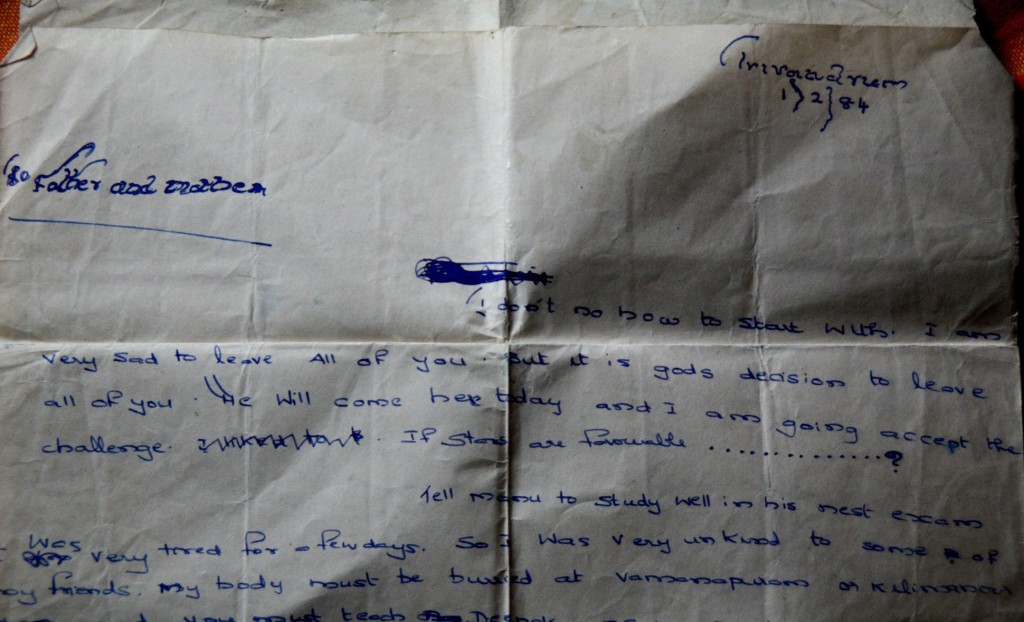 Your friends pulled themselves out of the pact at the last moment because they thought they should wait until the next morning. There were no mobile phones back then. So the decided-to-live could not in any way reach out to the decided-to-die to announce their last decision. Instead the boys stayed in their bedrooms that evening, tapping their fingers nervously on the headstand of their beds, waiting anxiously for the bad news to arrive from across a dark city.

But what difference did it make! For my bro, he did not die alone. He died with the image of three deaths creating uproar. 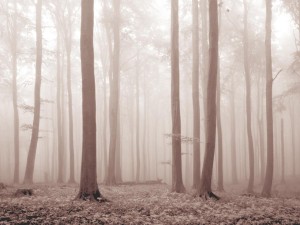 You were all rebelling against a teacher who failed you in Model exam out of spite. You thought death would speak for you. Perhaps a little louder than life. You expected that your schoolmates would burst out in revolt seeing your dead body.

Your friends came here, formed a long line, cried their part and went back to their homes. One thing, I forgot… they demanded a holiday. And were given.

Brother, you showed some magnanimity in not mentioning the teacher’s name in your suicide note. That came handy for the management. He taught the boys for another five years before he retired. Memories fade.

One is happily settled in the UK. The other whom I met some years ago has got a beautiful wife and a good job. You should see how handsome his son is (almost your age when you decided to leave the world along with his father). I found it hard to help your friend remember you, his compatriot in a tryst you all made on a cloudy evening many Februarys ago. When he remembered he almost burst out into a stupid laughter, then he corrected himself.

Between that cold January and sweltering March, only we suffered the loss — your mother, father and brother who were all kept in the dark about a pact – a pact that dimly gleamed in the rose plant that was not watered, in the crumbled papers in the waste bin, the sudden hugs you gave me, the long watery gazes, the magnanimity of giving away text books…

Some years ago a student came and showed me a wrist with half-healed gashes. “Why did you do it?” She told me that her father is in prison. And her mother 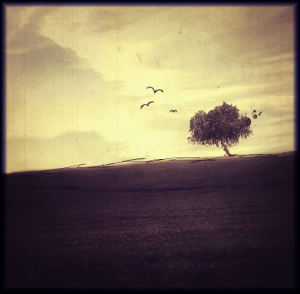 doesn’t trust the good-looking girl for reasons beyond logic. “I am going through hell, sir. My mother thinks that everyone is after me.” When she couldn’t stand the tantrums her mother threw, she decided to teach her mother a lesson.

Lesson! I thought about you then. You and your lesson you wanted to give.

Brother. Even though both of you sing the hosannas of death as a generous host, a wide sea separates you from my student. She has time to think and can still wade back to life through prayers and also with the help of her friends and teachers.

You wouldn’t believe how the world has changed since you have gone. Very few have time to think about your loss these days.

You didn’t create a revolt; you didn’t make a point; you didn’t upset the people you wanted to; you didn’t teach any lesson; you didn’t upturn even a single leaf by your death. Even we had learned to live dodging the shards of your memories.