You are here: Home » Featured » The Jungle at the other side: Part 2

The Jungle at the other side: Part 2

We slipped through the curtain of the ordinary and reappeared at the other side right in the midst of a forest. Twigs cracked under our feet. We trudged through bamboo thickets to reach the chequered shadows of sprawling trees.

I didn’t know when and where I fell behind, but I got too bored as my companions yapped in a strange dialect about the problems of farmers in the district, and how they were going to deal with them. I shifted my pace, raised my antenna to pick the faint notes of the forest. Cicadas. 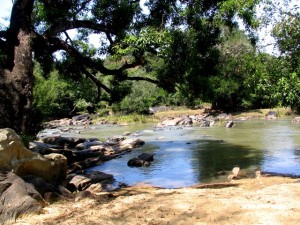 But I definitely heard one thing through the hullabaloo of cicadas. “Don’t make any noise. Elephants were here,” whispers Rajan aloud pointing to hefty droppings. “Still warm,” he says.

Pretty soon, I found myself running hard to catch up with my friends, but had decided not to pant once I reached them. We walked again as one group, with them yapping and I mutely listening as a man of humility.

Among other things, Rajan talked about leopard attacks which were a threat to his people. “They even take away our dogs at night,” I looked around. Strange fears began to grope around for a toehold in my mind.

Rajan stopped suddenly, looked straight up, cupped his palm over his eyes to screen off the dazzling sky gushing in through the canopy, screwed his eyes, scanned the thick dark leaves and said,

Gangadharan looked and nodded, “Yeah, over there.” I followed their gaze and stared dumbly up. Nothing.

I cocked my head and listened. All I heard was the twittering through the silence, and I finally traced the voice to a pair of birds perched on a high branch.

“Flying squirrels!” He said and pointed to a place almost 6 meters away from where I was looking. “You saw?” He lobbed the ball at me. I stared blankly into the mess of leaves over my head. “Oh, yes!” I patted the ball back embarrassingly. My smile had long vanished.

After an hour of heavy trudging through the jungle we reached our destination- Pakkomkotta temple. 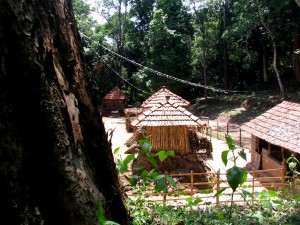 It was believed to be built by Pazhassi Raja when he was in exile and fighting the British. The blocks were built by and penned inside bamboo railings.

Mark this, my friend. The time you would spend here some day in the precincts of this desolate temple in the midst of a forest is not to be rushed.

It must be savoured, sip by sip.

I kicked off my shoes, took off my t-shirt and slumped down on the root of a big tree near the temple. I wanted to lie here until my mind was soaked to its last cell with the spirit of this place. I was humbled by the solemnity of the rich history and exotic tales associated with the place.

Your beard might grow, turn grey and wither, your pulse might run out of its windings, the sun would burn itself out in fatigue, and you will never know, if you lie there on the scuffed grass under this shade near the temple.

The light through the leaves, the way it searches out the tiny chinks in the bamboo walls of the temple, buffing them with a glow, now a shade green, now pure gold, is a sight indeed. We spent hours there without uttering a word.

Then we got up and walked towards the water-gazing tourist village of Kuruwadweep. But I was too satiated by now to enjoy what it had to offer.

On our way back, we reached another settlement. I saw a little pond of spring water outside the village. The water was collected in a burrowed out base of a mango tree. “Drink it,” Gangadharan said. “Drink what?” He pointed towards the crystal clear water. 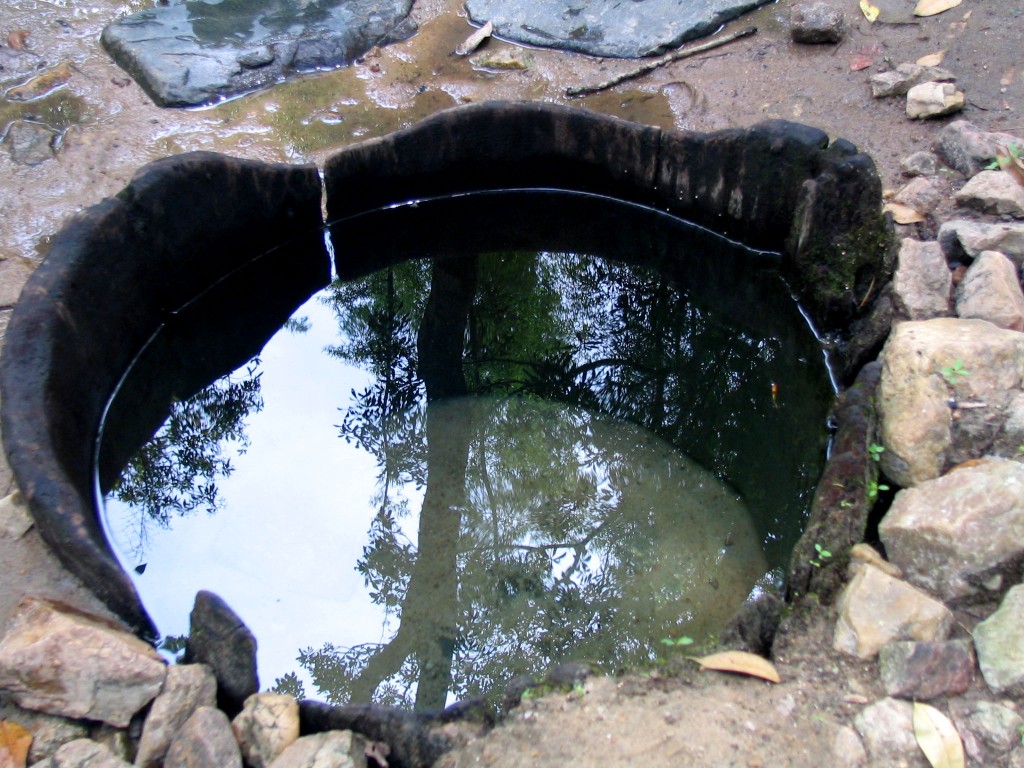 I could hardly imagine myself glugging down some water collected in open air ponds and streams. I demurred.

“Come on Manu, drink it.” After a little more pressure, I complied and took my first swig of spring water. Man, a gasp of delight escaped my throat. I felt water tickling the back of my neck, gushing down my chest, sloshing down to my stomach, blazing the path with a coldness difficult to describe.

The sweetness was telling, a fine delicate touch of ripe mangoes. The heady tang of the fruits swirling from the water refreshed me in an instant.

Like a one -year-old baby who burrows its head deeper and deeper into its mother’s bosom, I went down again and again to soak my innards with spring water, refreshingly cold.

“Our forefathers built it,” Rajan said proudly, “we use only this water for drinking and cooking. We call it kaeni.” He smiled, the beedi smell still hung about him as he talked, though he never smoked all this time. I found his smell suddenly sweet.

Years have passed since the journey.

Here, I stand on the trendy side of Kuruwadweep which is cut to size for the tourists.

I looked back again. A part of  me left to swim across the river.

To get deep into the adivasi settlements, to peer through the miasma of beedi smoke swirling around my guide Rajan, and to leap with the flying squirrels and leopards. It would make way for the women with haystacks balanced on their heads and also those angry elephants coming this way.

It would want to lie down again by the side of Pakkomkotta temple listening to the stories that the wind fills its ears about the exploits of a great king it met long ago at the very shade it is standing now. At the end, it would also grow an unquenchable thirst as an excuse to soak itself with swigs and swigs of some water laced with mango.

Few could understand why we stood there for a moment, looked each other, and smiled knowingly, stealing away some moments from all the celebrations happening around us. Few could tell why we then sighed and retired to our prosaic lives of fooling the world with our pleasantries.

There is always a jungle at the other side.

Of everything. And of everyone.

8 Responses to The Jungle at the other side: Part 2