You are here: Home » Featured » Guesthouse: Musings from Mokeri

Deepa Prasad, Assistant Professor and diehard Trivandrum-fan never thought she would soon be swept off the floor when she decided to go North. Here she shares with the readers of RRR many interesting and thought provoking experiences and insights she has picked up as a ‘blissful convert’. 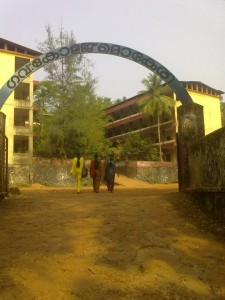 Almost 18 months back when I decided to take up a Government job, everyone kept scaring me off with the single most powerful word: TRANSFER… When I was finally appointed at Government College, Mokeri, the remarks started to take on shrapnels of terror too: “Oh God! In the North??? There is sooo much of violence there!!!” (As if there is no violence elsewhere…)

Thus it was with a heart weighed down by loads of apprehensions and tonnes of grief that I set my foot (the right one, of course) into the red soil of Mokeri. After being the proverbial cat who had fallen into the hotwater of politricks in a private college,  and who had been scalded enough and more, I was wary in the beginning. And realized with a shock that the others were being wary of me in turn, because I was a “Thekkan”. Talk about irony! (A famous and popular saying on this part of Kerala is that if you see a cobra and a Thekkan, kill the Thekkan first, because the cobra will be more reasonable.)

Pretty soon I could see that the hardness of the soil and the roughness of the terrain produced only unadulterated people with an immense core of soft love and respect for others in their souls. I had finally met a bunch of “genuine humanbeings” to quote a student of mine.

Among my experiences here, all of them are, of course, memorable. However, here I will limit myself to my tryst with the food and the language. As an ex-foodie (age being a dominant factor in relegating me to the ex– position) and a narrow minded Thekkan, I thought the best taste belonged to the South. Was I in for a surprise, man!!

Malabar taught me the delicate tang of spices and I could finally understand why the West was drooling for our spices. Have a taste of the delicious Malabar biriyani 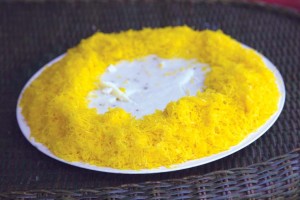 or its scintillating ghee rice, and you won’t know what hit you. You will go on eating and eating, and never feel full. The piquant beef roast and the supple mutton chaps, the soft folds the paratha… OMG… If this is not enough, move a little further to the neighbouring towns and your eyes will be straining from ogling at the umpteen number of delicacies displayed in the bakeries. The intricate muttamaala is an art in itself whereas the crisp samosas will linger in your mouth for a long time. Even the veg ones, believe me. The bread roast just sucks you up with a fine balance of sweet and hot and spicy flavours. Not to mention the nadan items like Kinnathappam and irachipathiri. You ask for one Chicken Fry, and you get a mammoth piece, big enough to feed 3 people. You can never complain about the quantity or the quality.

Language was the other major area where I had a lot of adventures. What struck me was that here the language was more refined than in the South. They don’t say piller for children, only kuttikal. A girl is never addressed as edi, only as edo. My Head of the Department, in fact addresses me as “madam” and I used to turn around to check who he was talking to. It was a shock for me to see men being so respectful to women, and that  it was never a put on thing for them, it just came automatically.

But the best part was the zing of the local slang. I still remember standing dumb when people asked me something, unable to decode the string of sounds pelleting 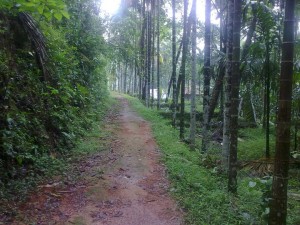 Slowly I could decode this musical maze of a dialect and became conscious of the rough edges of the dialect used in the South. Vo thanne, entharu parayanekkondu… njan avaludi kyettu thyengayondaannu. Avalu parayanu tharoolleennu…. (Oh yes, what to say. I asked her whether there was coconut. She told me she won’t give). Thanks to Suraj Venjarammoodu, my students keep telling me, ingale bhaasha Trivandrathe pollallallo, techare. And then I painstakingly explain to them about the Parasshala accent aka Rayamanikyam accent (thanks to Mammookka). The talented Sreenivasan had familiarised us with use of “kk” instead of our “ykk” [njan 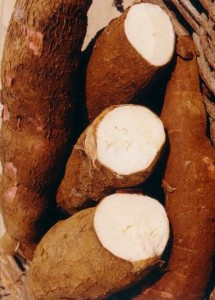 The  best part about the language was when I realised with a quiver that vocabulary was the trickiest of them all. Because just as I was shocked by a synonym that is used in these parts for “tapioca” (you can find it written in large letters in shops and hotels available here), they were in turn shocked by an innocent term we use to mean “insect”. When a child asked me once, “Deeapaunty, ithenna?” pointing at an insect on the wall, in all her innocence, I repled, in all my innocence, “Oh molu, athoru ________ya”.  For the life of me, I could not understand the stunned silence that followed my reply! [clue: both words start with “p”].

And when I happened to read that, along with mutton chaps, kuttan chaps is also available here, I thought they were kidding. Until I gathered, soon after, that they meant it in all earnest, referring to “beef chops”. I ask them, “Is this Dilkush?”, and they say, with a tinge of amusement, “No, it’s Masala Bun”. Can you imagine my plight when I went around the shops here trying to buy masala kappalandi? After a week’s desperate and unsuccesful attempt, I finally picked up a packet of the said thing and asked the shopkeeper, “What is this? I want this, actually”. “Oh,” pat came the reply, “masalkkadala…” Well… poovennum chollam….
Yet another interesting aspect here is the heavy influenze of Anglicized names for commercial purposes. The bus we regularly take from Vadakara to Mokeri is PEE PEE, which stops in front of the AAR VEE studio. On the way we have KAY YEM Enterprises, and EM PEE stores. That’s right, a beautiful habit of expanding initials. 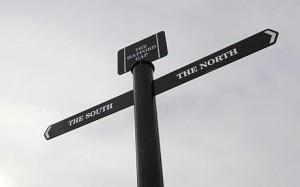 I happen to be a die-hard Trivandrumite and am always proud of its rich heritage and tradition, its wonderful ghee roasts and idlis, its old buildings that retain the charm of Travancore amidst the surge of multiplexes and MNCs. And yet I cannot help falling in love with this unique piece of land and culture, which somehow preserves the purity of humanity, as yet uncorrupted by the ratrace found elsewhere.

I hope and pray that my experiences in Malabar will remain just like its famed biriyanis – rich, spicy, delightful and heartwarming. Insha Allah!