You are here: Home » Featured » Guesthouse: A Stalker’s Tale

Cris hardly needs any introduction to the English reading ‘audience’ in Kerala. Her name itself brings to me memories of many stories she has written in various journals, magazines and newspapers. They have that quality to resonate for a very long time in the minds of her readers. And here comes one such refreshment for the readers of RRR.

You know what’s the most annoying proverb ever? It’s when people come and tell you that once you are a ‘that’ you are always a ‘that’. 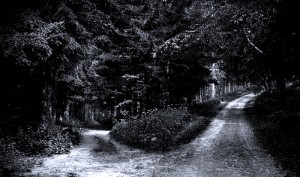 Just that one day, just that once, I missed that straight road, the one that qualifies you to be in the decent zone. It was as usual a girl, the same reason that leads every true-blooded Malayalee astray. Her fault, all of it – if I had a say in this story somewhere. But where a girl comes, there is no say for a man.

The day had gone as usual till evening, when I stepped out to Nanduvettan’s tea shop outside, which makes me wonder about this whole question of fate. If I had chosen Thomasettan’s thattukada instead, I would never have seen her. But as fate would have it, I stood there pretending not to hear the pleas of the old one-legged man who begged outside Nanduvettan’s everyday from 10 to 5 (he was very punctual about this, I have noticed, skipping all the way to the bus stop for the 5 ‘O’ clock ‘Kaveri’). Fate again played a role I feel, for if I had turned my back to tip the beggar, I wouldn’t have seen her. I didn’t turn. So I saw first the hair, which like in movies, blew back on either side of her violet kurthi, revealing the small violet earings and the violet Angry-birds earphones from her ipod. It all registered in that one flick of a moment. I had no need to try and remember anything. Better than any photo I have taken after moments of fussing and focusing. I didn’t know I was staring. I must have followed my gaze till she reached the end of the lane. There was a moment’s hesitation when I wondered about stepping out of the decent image I had carved painfully for 23 years of life. But I knew then what I had to do. I had to stalk her. 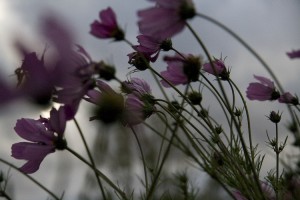 Even from the safe three feet I put behind her, I could sense the perpetual smile on her face. Smiling, I imagined to the songs she heard, to the memories it brought her, and to the occasional visits to the present when the wind blew too loud (or to put it crudely, when the cars screeched). I don’t know if she knew I was behind. She must have. I thought I saw her glance sideways as if she checked for the traffic but wasn’t she wondering about me? That’s the thing about girls. They can never be sure if someone is blindly admiring them. Why are all women so unconfident, so unsure? Of course men are always looking at them, not at the blue skies or the chirpy birds we pretend to avert our gazes to. It’s always you, woman!

She crossed the road twice and like an idiot, I crossed it with her, glancing at my mobile phone as if that would clear all suspicions. It was after two kilometers through the sidewalks of the noisy NH, that I found a spot to stop her and try to talk to her. By then I didn’t want it to be just a woman I saw and admired an evening. I wanted her to play a bigger role. Not a wife, not even a girlfriend maybe. But I just didn’t want to lose her to the vastness of the city, to some unknown lane she’d disappear to forever. It had to last a little longer. Fate played its third card that day when as luck would have it I chose a spot where I should be seen by one prying relative across the road. I wasn’t sure what my opening line should be. Girls like attention I knew, but they’d jump at the first sign of any communication beyond silent glances of love. I didn’t use ‘hi’, too cheesy. I said excuse me. Violet Kurthi stopped. I could ask her the way to some place…no, too fake. I chose honesty. “I have been walking with you for two kilometers”. Her smile didn’t vanish. She was genuine, she liked what I said and didn’t try to hide it. “I saw you back there and then I had to come and tell you how beautiful I thought you are.” Her brows raised, and smiling still, she said, “Okay”.

“I never do this, I hope I am not freaking you out. Do you mind if I walk with you?”

There was a little frown. She must be deciding. I am a total stranger after all. “I am sorry, but I have to go,” she hesitated. “But thanks.” 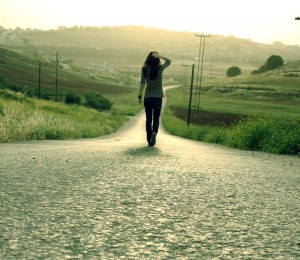 She smiled and walked away. I knew this was the right time to stop and no one will ever know of it. But trashing reason, I walked again. This time I did use hi. She didn’t stop walking, so I walked along. “I really don’t want to disturb you, but think about this. If you see someone interesting, and you want to know them better, what can you do? Real world is not facebook where I could click on your face and find out our mutual friends or the place you work at or study. I could not even send you an FB message and play it safe from a virtual distance. This is the real world and I took the direct step. Is that so bad?” She was listening all this while, her dark brown eyes bouncing like a ball when she looked at my face. She had a few red pimples. Such darling pimples! “Ok you seem like a nice guy but really the world is such I can’t trust my own – hmm let’s avoid clichés. I can’t walk with a stranger, your name?”

“I can’t walk with a stranger, Ramesh.”

“I understand… but I can’t just leave you.” I was desperate.

“I could give you my Facebook id. But I am not going to. Like you said, real world is so much more…. real. I walk some days like this, around the same time, and the same roads. If you are around, we will catch up. Ok?” 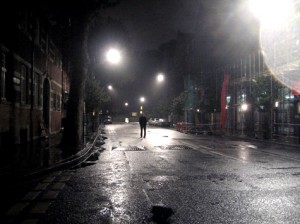 “And this time, don’t follow me again. You don’t wanna be called a stalker do you?” she smiled and put her Angry-birds earphones back on.

Well, I tried. I couldn’t dwell too much on my loss for the prying relative had crossed the street and asked me what I was doing. I was thinking the best lie but I knew it’s useless. He had heard all he wanted to, and stayed quietly in the background to jump in at the right time. The villain must have stalked both of us! He knew from my silence I had nothing better to offer. And with his own juicy bits he presented an elaborate story to the family. “My own son, a stalker! All those years of feeding him paal and pazham!” – No, not from my mother, but my serial-watching dad! And for the record, he has never given me a single pazham, even snatched several of mine! Amma did the more worrying role, of refusing to talk about it, giving food and tea but never looking at my face. My sister didn’t bother to hide how she enjoyed all of it. She kept calling one friend after another, to tell about her stalker bro. Where are those days when aniyathimaar looked up to their vellyettans?

It’s been four days now. I never saw her so far. I tried everything, from being not so obvious to being extra kind to the one-legged beggar, buying him tea and murukku everyday. What if she is watching me secretly? At home, it’s the same story. But I have my hopes, I hear my prying relative’s son did badly in his 12th standard public exams. The family would lose interest when they get a new black sheep. Poor Vinod. The only thing worrying me is mom. Dad would go watch another serial, aniyathi would start bitching Vinod. But mom would continue throwing plates full of food and gloom at me. I came straight to the point. “Havent you ever seen a man somewhere, in a train or a bus, on the way to your college or home and let your eyes linger a little more than needed, wondering what made him laugh, how his voice was like, what he talked to his friends about?” From her expression, I knew she had. “I just spoke my mind Amma.” She nodded. The silence was over.

The next day I waited at Nanduvettan’s without any pretence. I was a man with a purpose, my mind was full of her. My mind was violet. 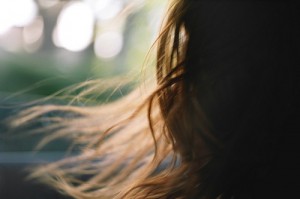 I had nothing else to think of, so why waste time trying? You need hard work to win in anything, and I would win her… I would do all I can. I would…. I would…

The old beggar, now used to my daily alms, was waiting for his tea. The evening August breeze was at work again and it was again blowing hair… red hair. She did not look like a Malayali and nothing like Violet Somebody. This was an angel in green. Red strands fell on her pink pimple-less cheeks every time she turned her tiny head. And what a turn that was! I hesitated for a moment. And then I heard ‘Kaveri’ bus come and the old man not rush, he was still waiting. If he could change… and if once a ‘that’, is always a ‘that’, then…. Well then I had to stalk her. It’s fate.

Cris has written 1 stories in Rum, Road & Ravings. You can read all posts by Cris here.
by Cris |
3 Comments |
Featured, Guest House

3 Responses to Guesthouse: A Stalker’s Tale