Statutory warning: Many readers stopped eating beef curry after reading this freakish, sorry Freekick piece, first published at yentha.com. So if you are an avid beefarian read with caution. Don’t visualize too much. And if you are having beef curry as you read this story stop right now. Either eating or reading this.

“No, I don’t want it, you eat man.” I pushed my plate of red hot beef curry towards him and mumbled in a wretched voice. “I don’t feel like eating Binu, I am not hungry.” 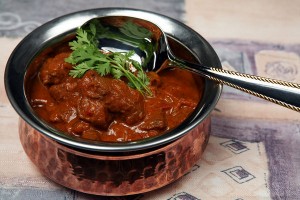 Red colour. Grated onion. Slender pieces of meat bobbing up and down in it. A thin layer of oil, curry leaves, half-a-dozen coconut pieces and a few mustard seeds float at the top. Piping hot beef curry. Yummy, alle? Add to that the soft, but crispy-flaked porotta with smoke still wafting up. The stuff is mouth watering for any beef-arian out there.

Add to that, my hunger. Someone said, hunger is the best sauce to any food. True. Since morning I hadn’t eaten anything because of this promised treat from my friend who had married only a couple of days back. The hunger was too much. I had already chugged a bottle of Kingfisher and now waiting for the next one. The beer added sizzle to the already blazing combustion engine in my stomach.

Even while I was imagining the kind of beef curry which would soon come to the table, Binu was going non-stop with his experiences as a brand new husband. The boy was so suddenly married, that he was least prepared.

Then the food came. The mouth watering steamy beef curry and porotta. Wooaaaah…you can imagine how the first morsel of porotta dunked 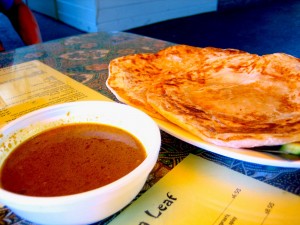 I put it back and pushed the plate towards my friend sitting opposite. “You eat, Binu, eat…. I don’t feel like eating. You eat.”

“What is this Manu chetta! You asked for this treat. You ordered beef curry, and now what? It seems very tasty!”He pushed the plate back.

I tried once again to make a go at it. But failed again and this time I determinedly pushed it back to my friend’s court. I am not eating today, I decided. Not just today, but NEVER.

Yeah, not only that day, pal. Since then, I have never had my favourite dish in my life, the spicy red hot beef curry. Said good bye forever. Why did I forsake my favorite dish, you want to know eh?

Blame my friend. Such a dumb guy he was, he didn’t know anything about girls. I mean, what happens to them on a monthly basis. Period.s. He got married. Then he stumbled on to the truth about the monthly physiological affair with women. He had heard about census, but this one, never. 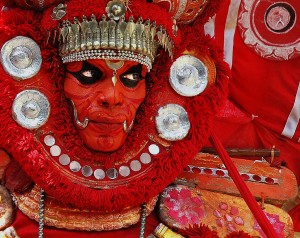 He saw. Was shocked. Startled.

When the initial shock waves subsided, a strange excitement took over, Binu got thrilled at his new knowledge.He felt like Archimides. He would have run out naked one night screaming about his discovery, had it not been for his parents living with him.

Time to flaunt the new knowledge. He accepted demands for marriage treats that came from every corner. So that he could tell what he saw to people.

So while I was going to have my first piece of porotta and beef curry, he screamed out, suddenly remembering the incident. “Manu chetta…you want to know what I saw yesterday?” Such a fool I was, I got curious at the wrong time friends, holding that first morsel of porotta dunked in red curry two inches away from my eager mouth.

I froze into a statue as Binu gave me a graphic image of the red spectacle, he witnessed. He was excited, thrilled, passionate. Very visual. His face contorted and warped at that point when he said, he stumbled on to ‘it’ for the first time, a crucial moment in his life.

I saw everything through his eyes. I looked at that for long. Then I looked at the beef curry, at the red, oily, dripping beef-curried porotta in my hands.

“You eat,” I said pushing away the red curry.

It was only the beginning for Binu. He learned more about it from his wife and burnt the midnight oil by poring over textbooks about the condition. When his wife suffered from periodical aches, he would be wandering in his bike. He rekindled old acquaintances on his way, just to say, “Oh I forgot, I have to go back home now, my wife is not well. Vayaru vedana…matte…” The young boy thought this piece of knowledge would earn him respect and membership among the married class. He proceeded to the next junction waiting for more victims.

One day he went to his aunt’s house for no reason. “Aunty, yesterday we were coming to your house.” And he waited for the aunt to ask him the reason for not 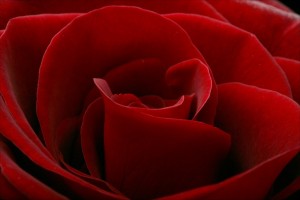 coming. “Avalku vayaru vedanaya aunty. Matte…(Matte means That…(you know what I mean, eh?))” and he juggled his brows a couple of times, to show her that he had now got the password to their folders. He wanted to form a secret communion with the adult world, represented by his aunt. He thought adults maintain their adulthood by always talking about it. The tottering cubs around, who were the only company Binu had until his marriage were thus shown the door by the now mature man. “You go and play. Chettan is married now, you know? There are things you won’t understand.” Poor kids, they played kanjiyum curriyum that time without their Anichettan.

My soft-spoken father got the shock of his life when he showed some courtesy to Binu as he came to my home. “Binune ippo kanareyillallo?” He asked innocently. “Uncle, we were about to come yesterday. But then, she has this stomach ache…matte…” Binu juggled his eye brows. Father, a teacher and a noted Malayalam poet never had such an experience in his 65 years of literary or teaching career. He silently walked back into his room, closed the door behind, collapsed into his easy chair, and pored over a big volume of Kunjikkuttan Thampuran’s Mahabhagavatham.

Then Binu went to Ootty for honeymoon. When he came back, we asked. “Enthayeda?” “Oh nothing manuchetta, matte…” I quickly digressed from the topic. I was having my supper of kanji and spicy red mango pickle that night.

His ignorance spread into other walks of marriage also. You know, a day will come in every married man’s life when the friendly neighbourhood ammommas would get proactive and ask, “Ithenthayithu! Visheshamonnumayille?” It came to Binu’s life also. 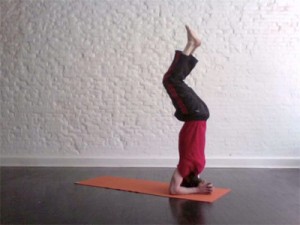 “Eda, your masculinity has to reach the right place. So a little gravity helps. Some doctors say that after the fun, it is better to do a headstand…er… I mean sheershasana, so that the tadpole would reach the destination (The woman after ‘it’ should lie with her lower body raised towards the ceiling. So that the sperm would gravitate to the egg, deep within. I don’t know if there is any grain of truth in it).

Binu’s eyes welled up with gratitude as he shook hands with Aji. “Ajiyetta, you saved my life, ” he said.

Well, he didn’t. Next week Binu was admitted to a hospital with severe back pain. The doctor’s advice undid him. His poor wife, a science graduate, didn’t understand the logic of my friend lying in sheershasana, for moving something he had deposited in her. “Gravity, you don’t know,” he blinded her with science.

With legs thrown upward he lay every night, until he was moved to the hospital with serious complications.