Nightfall in a Kettuvallom. 7pm. With one of my best friends.

There is a glorious moment in every ride across the Punnamadakkayal.

When night falls the driver beaches the boat on some lonely shore near a village. If lucky, you could catch a raft of ducks paddling across the deep green water back to their dusky home somewhere on the field where your boat is tied to a coconut tree.

Up the single track path, you walk for 10 minutes you may reach a toddy shop – refreshment for the night.

Spicy food. Cool white drink that feigns to knock your senses out, but doesn’t at the end. Village people. Care. Love. Quarrels. Abandon.

But we friends stayed behind in the boat mesmerized that evening.

The sight of a large boat suddenly coming alive at night with a golden sheen is something unmissable in a kettuvallom journey. 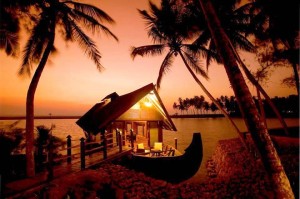 The boatmen lit the lamps one by one. And the lights heaved up instantly, caromed off at where they met the thatched roof, ricocheted from the bamboo walls, bounced back from the wooden planks on the floor and finally boomeranged towards the lamps  still burning in absolute nirvana, only to gather more fizz from the hearth to rush back to the loop of light with an uncanny verve to see the whole boat and the immediate river around burn with a blissful flush in deep gold.

In the light my friend sat against me and popped off the cap of a beer bottle. He declared the evening open.

A single sip. He wiped his moustache and passed the bottle to me. He sat back facing the lamps and began to unfurl strange tales before me one after the other; tales that would some day become classics in the celluloid. I still remember his face buffed in the yellow light. His sparkling eyes. The light that skipped through the water from a lonely house across the river behind him was hardly a match for the glow I saw from my friend’s eyes as he limned the plight of his characters before me.

We talked all night about life, death, love, religion…His tenor colluded with night and those eyes with the golden light inside the boat; he almost established a religion in that solitary boat moored on the riverside. I was the first votary.

In a train. Time: 1am. Traveling alone.

I wake up with a jolt. I can’t read the name of the station that the train has just rattled past. But in the light that slices in from the platform I catch my neighbours 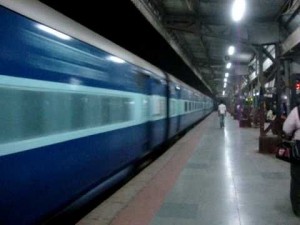 sleeping in their berths. Each in his cell.

In the ethereal blue light dusting down from the roof of the train they seem more like vapory ideas of babies yet to be conceived and delivered to different wombs far and wide.

I look outside with a smile.

I have kept my feet on the window ledge for long that they have now almost frozen with the cold blast. On the dark and mysterious valleys that pass swiftly, my eyes pick a few huts where faint bulbs still burn.

They emerge and disappear like tiny blisters in this night.

Why are their women not yet asleep? Why do they leave a vague and acrid pain in my heart? My eyes turn wet for no reason and come back to the ones who are sleeping in my compartment. Where are they going? What worries haunt their pallid faces? What passing dreams bring those fleeting smiles? Would we ever meet each other again? Perhaps in another journey? Would we then realize that we had met before, you sleeping, I looking long at you imagining your formless destinations? Whither goes thou stranger?

Come, wake up, tell me your story. The night is too long and the journey is too short, my friend. Let us talk until there is only silence left.

An ox cart through a country road in Tamilnadu. Noon. With villagers.

A country road in Pollachi.

I was traveling from nowhere to nowhere (I don’t remember those petty details like place names. Only the journey counts, isn’t it?). There were hardly any villagers with me as I always wanted it to be (Alas! Some wishes always  remain as wishes).

Brown fields ran all around as far as my eyes could see. The riot of bright blue sky was so unnerving against the boring earth, that I looked away into things more dry and nondescript. Like the brown dusty road.

At the end of the long and infinite road ahead something like a mountain shimmered and hovered in the air. My destination. A thin line of palm trees seemed to guard at its footless base waiting to greet this lonely traveler. 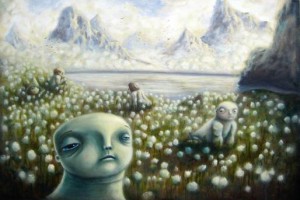 In the intense heat, I remember, I felt thirsty. But I was too tired to reach for a bottle of water lying near me. Here I lay inside the cart lurching along with it from side to side. A bundle of sluggishness careening along the potholed road in an equally lethargic oxcart.

The bells tingled on, froth spewed from the mouth of the beasts drawing the cart, thin rags of white clouds strewn on the sky. They all had a soporific effect on my senses. I slept with my eyes open. I woke up with my senses closed.

The driver rambled on in Tamil, vainly hoping that I was closely following his problem with his wife. I ummed and aahed, grunted and sneered, urging the poor villain to go on with his wife-bashing.  Opening my eyes now, and closing them again, opening them now, closing them…my ears catching shreds of his long chatter in Tamil at irregular intervals…

When would I reach the village at the base of that distant mountain hovering in the sky where nobody would be waiting for me? Would there be a village by the time I get there! Who cares!

My journey is through this tiredness, sweat, heat, lethargy, laziness…I dunk myself languidly in it. Leaving a bright blue narcissistic sky sulking behind unattended.

On a Bike. 6am. Alone or with the right people.

This old man had just promised me that he would show me the most amazing sacred grove in the world, only a few miles away. It took almost an hour and I was 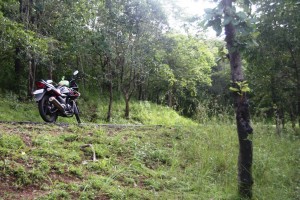 There was no sacred grove as far as I could see.

I kept myself to the road, my mind divided between the promise of a destination and the chatter of my pillion rider – a farmer – on his worries about the wayward rains, playing truant with his rice field. “Don’t worry. The grove is only a few turns away,” he repeated, touching my shoulder  addressing my impatience.

Finally he left me by a grove which was no bigger than a moderate park in our city. “Is this the biggest sacred grove in Kerala?” “Yes. It is the biggest in the world. You don’t know its greatness. ” The villager didn’t bat his eyelids as he showered superlatives on the one and only sacred grove he had ever seen in his life.

“You must write about this. Our god is so powerful, he would bless you.”

All this ride for a little patch of green.

Bike rides have not only taken me to queer little places in our country, but they have also led me deep into the lives of queer men in my journeys. To needle through the pocket roads of our culture on a bike is certain fun. Sometimes I feel like Che Guevara in the film, ‘The Motorcycle Diaries’ when I explore places with my ass pressed on leather. And it is no shame to declare that I even developed stress related disorders on my bums for sitting too long on the hot seat. I weaved through the veins of Coorg on a rented bike.

One evening the track ahead shrunk rapidly and alarmingly before me in the midst of a jungle. Until there was not even space for a cycle to move. I remembered with shudder that I had no acquaintances in the whole of Coorg, the nearby town to call for help. Two hours I spent in that wilderness trying to extricate the tires of my bike from the soggy earth.

I fell with my bike as it struggled to find a grip on the slippery track. I gathered myself up. I fell again.

The night and the forest closed in from all sides every time I fell. It was one harrowing experience. It was exciting as well. 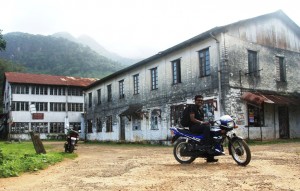 There is a point when the rain touches your sex through the gear you wear. The body trembles. The soul quivers. One  feels so macho when one rides drenched in such a rain, with every element juddering with the tut-tut-tut and the wetness.

Riding along the mountain roads in misty mornings is another exciting journey my youth would never get tired of. Ah, how I miss those mountain rides!

I kickstart the machine.

Catch me riding down the snaking road basked in the bright orange sunlight in one of these mornings. I will come piercing the white mist like an arrow zipping down the mountain. On my machine.

Manu has written 297 stories in Rum, Road & Ravings. You can read all posts by Manu here.
by Manu |
7 Comments |
Featured, The roads less travelled