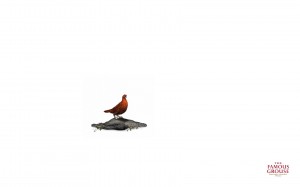 Birds have nothing to do with whisky except for their job to comply as crispy snacks, fried, dried and roasted to accompany the drink at a party.

But the Grouse had changed that.

When Entrepreneur Maathew Gloag’s daughter Philippina sketched the picture of the red Grouse, the national game bird of Scotland she didn’t know this was going to be epochal. It soon became the mascot of ‘the most famous scotch’ from Scotland

Earlier Matthew Gloag who was invited to supply the wine for the official banquet had charmed Queen Victoria on her first visit to Perth. The experience propelled Gloag to conceive the Grouse Brand. His daughter’s sketch of the bird came handy for him.

He saw that the tourists who flocked in from the Victorian England during the last half of 19th century for cleaner air and Scotland’s stunning sceneries needed something special to indulge their palates with. 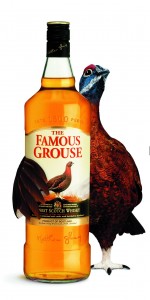 Gloag blended some already existing malts to create a perfect drink – the Grouse Brand. Grouse became an instant hit, and so was renamed ‘Famous Grouse’ in 1896.

In the United Kingdom where the Grouse became one of the largest selling whisky, the Royal Society for the Protection of Birds found in it a big opportunity to further its cause. They had long been in a struggle to save a bird, the black grouse, from going extinct in their country. Already the bird had found a space in the red list of species on high conservation concern. So when you buy a bottle of the new ‘Famous Black Grouse’ a nominal amount goes for conservation activities. Reasons galore for drinkers!

The Black bird has in its soul a happy marriage of the Famous Grouse with Islay Malt whiskies. The result is a unique drink with a prominent peaty character.

When you reach ‘The Famous Naked Grouse’ you’ll know how sturdy the grouse business has become. It creates wonders with each new expression. The big, weight ‘Naked Grouse’ whisky, with its sherry aftertone, is considered by many as the best among the grouses.

In the 20th century the Grouse developed a unique and revolutionary promotion campaign that became a benchmark of ingenuity, reinforcing the brand’s premium status. It offers a chance to get your drink more intimate, enabling you to personalize the bottle with your or someone else’s name. All you have to do is to tell them while ordering online what you’d like on the front of the label. 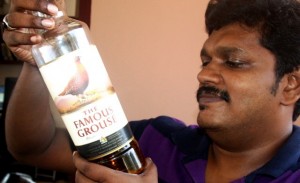 So please don’t gawk when you come across a bottle named, ‘The Famous Manu Remakant Whisky.’ I’d someday have it.

So where to begin?

I would recommend ‘the famous Grouse Experience, at the Glenturret distillery which features an interactive zone and The Grouse, a cutting-edge, interactive movie that takes you on a bird’s eye view tour of some of Scotland’s best-known landmarks.

With a peg of ‘the Famous ….. whisky’ warming in your hand. Cheers dude!