You are here: Home » Featured » Beefeaters of Kerala

The cows and incidents depicted in this story are fictitious. Any similarity to real cows alive or dead is purely coincidental and not intentional. 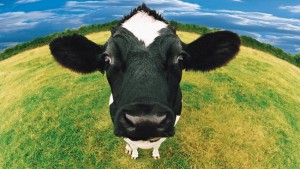 I regarded her face again, and then slowly, without giving her any clue, walked across the meadow to steal a look at her from the other side. Sleepy eyes. Large ears. Long muzzle with nostrils flared. She stood there re-chewing the cud from last day’s meal she very thoughtfully stashed away in her rumen.

‘Amme’, I called her softly. She didn’t turn. She didn’t raise her head. She didn’t even nod in acknowledgement. I looked around embarrassed. I took a step towards her. ‘Amme…’

My heart fell, tears clogged my vision, and my voice broke. ‘Mathaji…’

No, she seemed a far cry from the mother I know from birth. This is something. They cheated me! This could be… just a cow, Bos taurus, I looked at the long tail that fanned out to lush bristles where it hovered over the green meadow. Mbaaa….Human mothers even when they go mad at their children and assume their worst selves speak a different dialect.

This is the story of a Malayalee’s (Mallu) exquisite relation with cattle.

Most mallus recognize bovines only when they get them on plates along with diced onion, and a glass of his favourite drink. To imagine that beef had a previous life before its cooked form is too much a conundrum for their addled brain.

Once bathed in spicy masala and deeply cooked, beef loses all ambition and wouldn’t have the verve to put an air of a father or a mother or even a distant cousin before a mallu.

This is top secret: most of us don’t even have the skill to tell a cow apart from an 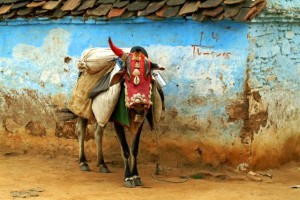 ox, buffalo or a bull from its taste. No discrimination, I mean. It’s like those days in our childhood when we couldn’t see kids apart as nairs, ezhavas, pulayas, brahmins. We called them all ‘friends’ just the way we called every piece of red meat (leave mutton) we ate in Kerala, beef!

So you can imagine the consternation we had when the cow part of this beef we were eating suddenly rises up from our innocent plates and hollers daring  us to eat the mother, the Gomatha!

I think the cows knew it coming, that the age of the bovine was just around the corner, that a government would soon rally all its army behind her rump. They had been carrying this momdom for quiet sometime, covertly, sometimes explicitly, in their nonchalant strolls across the roads holding traffic in various cities in the North for some ransom, in their smug squats on the veranda of schools, in the way they drive policeman play pole dance in an archipelago of traffic islands across the country. They were living with half their feet in future, even though they know the day of resurrection is still far away in states like my Kerala.

Any cow that dares to overreach itself here invariably becomes beef dry fry in our bars and hotels. Even those peace loving cattle, which don’t mess up with traffic, but get stupidly curious and walk up to see what the hullabaloo in a campus is, get invited these days, and dressed, and end up in red hot curries in beef festivals, organized by student parties in protest against the beef ban. That’s the huge craze for the meat in Kerala.

But now, my state is genuinely worried at the sudden turn of events with the prospects of a beef ban looming large in the horizon. What will porotta do without beef! (Porotta is a type of bread invented to accompany beef in Kerala).

(But more worried are the f 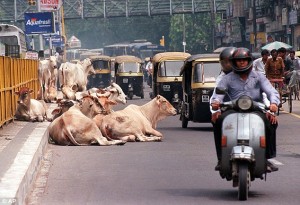 owls and goats in the state, which have already started feeling pressure building in the cooker. If they don’t come up with any holy scriptures citing some relationships with men, cows will have the ultimate laugh at them).

Still one part in me, the child part, secretly wishes a blanket ban on some food. Even a beef-ban is ok.

In my childhood I always felt jealous of my Muslim friends who could turn up their noses and push away plates of pork saying their religion forbade it. Aw, how desperately I wanted to turn up mine, push away something responding to them in a fitting manner! But my amma told me we could eat anything. I found myself deeply wedged in a religion, what should I say, a religion like a garbage incinerator that let its followers consume almost every shit in the world.

A religion can be felt only by the taboos it held dearly, I thought. How can one own a religion, the thought worried the child, which doesn’t restrict you on anything!

Now if you make eating beef a taboo in my religion, at least my grandchildren would get the 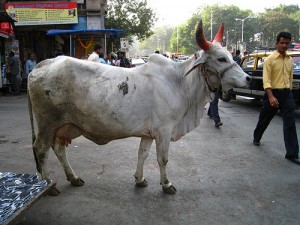 opportunity to join their Muslim or Jew friends in the Russian roulette of proudly turning up noses and pushing away dishes as taboos. Now your turn, they would say! Fun, it would be!

No dear, no! I don’t have issues with people taking cow as mother.

I take issue only when you push your bovine mother over the wall to this side.

Still sometimes when I think long and hard I wonder how it is possible! Blame my ignorance if I am wrong, but how can you draw milk from a cow-mother without hurting her dignity? No animal in the universe harnesses its mother to a pole in order to get its milk (Leave the stunned calf that suddenly gets a biped brother vying for the coveted drink).

If you see her as mother, you should untie her, and ask politely if you could take it a bit.Or you play a good baby to her, coo cutely so that the milk of love automatically dribbles down and fills her udders. After sometime, the cow might even nudge her calf, your bovine bro, away to make room for you, take you on her lap, hug you tightly, and gently push her teat to your mouth.

Those days are looming in the horizon, they say.

But today we know cows haven’s started reading scriptures nor do they respond kindly to our filial concerns. If you get too close to it claiming your rights as son, you will see its beefy side! 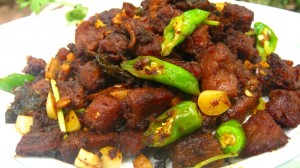 How ironical! It’s is exactly that beefy side of cattle which lures us, the Mallus, from far and wide to gather around the tables in our homes, all drool and fingers.

Forgive us for eating, thinking, being different.

2 Responses to Beefeaters of Kerala