You are here: Home » Featured » Baptism by Fire: My Father – Part 1

Baptism by Fire: My Father – Part 1

Despite all the pressure, I had to wait for four years before I could bring myself to write something about my father.It was as difficult as to take a handful of water from an ocean. What to choose and what to leave out. What I leave behind seems to be of Tsunamic proportion. Still I bring to you this handful. My father, Kilimanoor Remakanthan, as I know. 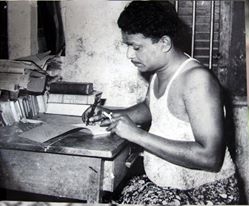 It was a time when a boy with a spark of poetry could turn into a ball of fire on the pages. All he had to do for that was to raise his wick a little higher and to stand his ground courageously. The air was permeated with the spirit of freedom struggle.  “Sing my beloved koel, sing the revolutionary songs,” my father exhorted his first readers. It was the 40s.

But India got freedom without my father’s help.

He bungled it clumsily when the only opportunity to prove his mettle on the battleground came. Yeah, he spoiled it. Ignobly.

Just like a few of you and most of I would do.

Picture this. At the sight of policemen charging at some protesters my father scampered off in fear. Moreover much to my chagrin he lost his precious tiffin box as well. He told me decades later that it slipped out of his hand while he leaped across a ditch thinking that the policemen had reached right behind him (Later one of his friends told him that while he was jumping across the policemen were resting in their barracks).

He chickened out. Even though he was only 8 then.

“But why did you run!” the 8 year old boy in me would ask disappointed; disappointed at the prospects of having a quitter as father. “Did you cry?” “Yes, I cried.” Now I was even more disappointed as I realized that I got a man who could cry for a father. “I ran because I didn’t like to get hurt. I wanted to avoid pain.”

He was that straight. 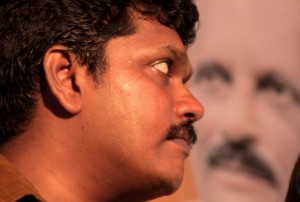 The one thing he avoided all his life was pain; the one thing that followed him loyally was pain.

My father chickened out in other instances too.

The poet took to certain fancies at various stages of his life however fleeting or absurd they might seem to be; but to our relief he had his fears too to balance them out. One day I caught him in saffron robes at home declaring that he had turned into a sanyasin.

Amma needed my help, I guessed.

“But why acha! Why this decision!”
“Yathi told me (Nithya Chaithanya Yathi. And this is a true story) to return to him but only after 30 years when I expressed my wish to join his ashram long ago. It is time now.”
“But how can you be a sanyasin all of a sudden! There are so many rituals to be followed. You can’t take it.”
He pushed a paper at me now. In it were printed twenty conditions to be met for a common man to turn into a sanyasin. My eyes scanned them one by one. I was cool, because I knew this obstinate child sitting opposite me.
“It says, you have to forego meat forever. Can you?”
“I didn’t touch egg in the morning.” I looked towards amma and she certified the statement with a glum nod.
“It says you must wear saffron clothes for the rest of your life.”
“I am already wearing one.” 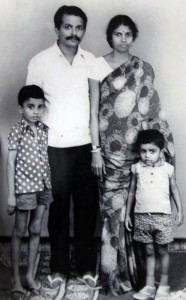 Then my eyes as they climbed down the page suddenly hit a tripwire. I smiled inwardly, coughed a bit as I tried to choke back a shriek of laughter building inside me. Finally I regained my composure and asked him in a flat tone:
“It says, you have to sleep alone in your room. I mean in a dark room. No mother. She can’t sleep in the same room. Can you take that?” I pronounced each word distinctly so that the horror could sink deep into his imaginative mind.
Silence. The question stopped the sanyasin on his tracks.
“Acha!”

Half an hour later when I came back after a little shopping I was pleased to see my father in civilian clothes; he was smiling at the veranda welcoming his son.
“Innalathe mutton curry ugranayirinnu (The mutton curry I brought home yesterday was very delicious). Where did you buy that from?” He asked. He didn’t understand what was so funny in that question that made the rest of us burst into hearty laughter.

My father lived happily. No, I must say all. He lived happily when he was not having a wife dying or a son committing suicide.

“We should somehow make him cry,” I heard whispers from the crowd that milled inside my home 29 years ago. Only an hour ago, his son, my brother committed suicide. I was too small to understand the tragedy; so I kept close to my father. I shouldn’t miss the first tear drop that might roll down from his eyes any minute.

Only his poems wept for him just the way they faithfully reflected his joys.

They wept for him long ago when his first wife died taking away with her their child that was in her womb. ‘Janichilla’ one of the finest elegies of Malayalam literature was born from those tears frozen in his eyes. He married again after many years, this time my mother and vainly hoped the cup of sorrows reserved for him had drained.

Then my brother was born.

He was all life.

He went to temples and to shops accompanying my mother, played with his granddaughter, traveled with me on my bike and sang aloud on nature. The poet, I know in my life was sympathetic to the common men on the street. He struck poetry in them.

His first collection of poems was gifted to a butcher in Pettah market. And what does a butcher do when he is gifted with the first work of a poet?

One Response to Baptism by Fire: My Father – Part 1