You are here: Home » Featured » Baptism by Fire: My Father – Part II

Part 2 of the story: Baptism by Fire

The butcher shredded my father’s poetry book page by page, wrapped his blood-dripping ware in them and sold them. 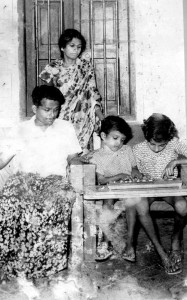 He had no complaints even when those well wishers visited us mourning about the way he was ignored.  It’s all about pulling the right strings, they advised him. He smiled. Some came with inside stories; they would tell him in whispers how his name was dropped at the last minute at the interests of other poets.

Sometimes he would sit for hours listening, nodding, grunting. Only my mother and I could read from his erratic nods that he had set them to match the cadence of his passing thoughts or some poem that was about to form inside in fine wisps rather than to the drab stories he was ‘listening to.’

When the narrative finally came to a grinding halt, my father would lean forward and ask:

“You told me that you have two sons, right?” “Yes.” “Which one is doing medicine?” The visitor would mumble something for an answer and rise from his seat.

He didn’t get much recognition, they say.

As his son I don’t have any complaints. My father lived happily in his world, ignorant about the designs people busily wove around him; he like a steadfast lover saw only one thing before his eyes, poetry.

Poetry could not afford to lose him, he believed, without first losing herself.

He worked day and night lying on his stomach on a straw mat spread on the floor, his upper body propped up on his elbows, cigar on one hand, pen on the other, writing deep into night. When he got tired he would get dressed, and announce that he was going to make another trip to Kanyakumari. By bus. The journey to the south was one of his obsessions. 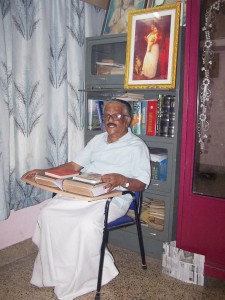 Twenty years, the poet took to complete the translation of Dante’s Divine Comedy into Malayalam. How many of us could steadfastly follow a single star for 20 years! I cannot. I got my genes on that from my mother’s side.

While translating the epic he came across the most controversial part of Dante’s work. There was the Prophet in hell.

Had it been any other translator, he would’ve found a fortune in that neutron bomb in Literature. One only has to pretend faithfulness to the text, translate it as such and let a few silken hints parachute down to the right spots in the media to bring about the blast. A guaranteed hit it would be. But being a devout believer my father was concerned about the sentiments of Muslims.

He didn’t discuss it with any one, but took a translator’s freedom, and defused the timer by using a ‘third person pronoun’ – ‘he’, instead of the dynamite word ‘Prophet’.

Readers know his poetry printed on page. As his son I was privileged to see how deeply poetry got imprinted in his very life; it seeped down even into the fine cracks and crevices of his mind filling his character with equal sweetness. You should have met him at least once to find how inadequate these words are to limn him down on a page or a screen.

To me the best poem I’ve ever read is still my father. The poet can die. The poem cannot.

To tell you the whole story, my father chickened out one more time in his life after the police charge that he witnessed when he was 8.

This time… I broke down when I saw him backing out.

It happened on the day the doctor told him that he must stop writing. Whatever energy he had, he must save it to survive another day. Would he cry now, I looked at his tired eyes through my tears, the way I looked at them through the rear-view mirror of my car a month ago. 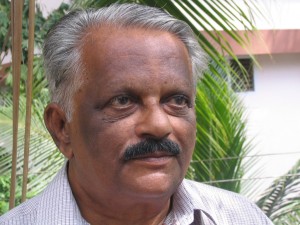 With the help of my singer-colleagues, Dr Arundhathi, Dr. Vanaja and Dr Bhavana, I cobbled together an album of sorts of his songs; we felt  ‘the last minute’ was just round the corner. He always loved to listen to his poems sung by others, I knew. So I took him in our car to Shanghumugham, his favourite spot, where he had taken me so many times when I was a child.

There he was at the back seat along with my mother watching the waves breaking on the shore.

Poetry ballooned and filled the car.

There he was, recognizing his lines, turning his head gently towards my mother, looking at her for a moment without a flicker of an emotion passing across his eyes. Then he let his head drop back to the leather and lay there for almost an hour with closed eyes. The waves were lashing outside desperately trying to catch his attention, perhaps to remind him about things only they shared.

Finally when he opened his eyes he told me weakly that he wanted to go home as he was very tired. There was no tear.

So when the doctor told him he cannot write any more, I knew this was the end.

He looked ahead blankly for a few moments, then laid the pen down, and slowly gathered himself up from his chair. When he limped back to his bed room leaning on the shoulder of my mother, I knew my father had just died.

He was pronounced clinically dead two weeks later on a November evening. I was right near him when he drifted away from our lives. The breathing got heavier, the white in his eyes cracked as they fixed themselves on the roof, red veins spread in them.

But not a single drop of tear.

5 Responses to Baptism by Fire: My Father – Part II