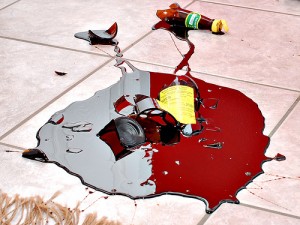 The party was only reaching its climax. Everybody present desperately needed a couple of pegs more for the road, but they were looking down an empty cache without a single bottle left. As the host I smiled, and asked my confidante to pull out my last number from the cupboard – a bottle of Bacardi.

“Wow!” everyone interjected in unison. I smiled proudly. It was magic indeed to produce a bottle of the Peurto-Rican rum  back then.

Excitedly my friend slapped on top of the cap with the face of his palm, some style he’d picked up from the movies to open the bottle. Bang! Crash! The lower half of the bottle gave way and all Peurto Rico gushed out on the mosaic floor in a single file.

“Ayyo…” Everyone cried in unison. I gasped hard. It was tragedy indeed to break a bottle of Bacardi back then.

If there hadn’t been any law and order in the country, my friend who accidentally broke it would have become minced meat in a single night.

Hey, did I call that tragedy!

But if that was tragedy what would you call it when a bottle of Cognac, a historical piece from 1788, slipped out of a customer’s hand and smashed on the floor (a single glass of it costs you around 4 lakhs rupees!) in a restaurant?

What would you  call it when a rare bottle of 1787 Chateau Margaux once owned by Thomas Jefferson which cost around Rs. 2,60,00000/- bumped against a serving tray, tumble down spraying around all its content on the floor in a party?

Friends, the poor drinkers of the world had survived all those things, as if their fuming wives were not enough.

It was like any other day at the London Playboy’s club. When a businessman expressed his wish to see the bottle from which he was served a couple of shots, nobody saw any tragedy looming behind. For a customer who could place a back to back order for a drink which cost him around 4 lakh rupees a glass, even the moon can be ordered.

But he humbly expressed his wish to see only the bottle.

Well, he nursed the bottle in his hand when it arrived, smiled proudly, put it back on the table, and finally stood up to leave. Then the inevitable happened. He bumped himself against the table, sending the bottle flying across the room, and down it fell…the 224 year old cognac, which was about to be used to make the costliest cocktail in the world.

That was the last bottle of its kind (Imagine! What would have happened if you were the customer breaking such a bottle somewhere in India?) 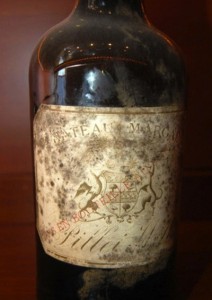 “We all just froze, then it sunk in. I’ve been heartbroken. Not because of the value of the bottle, but because it is a piece of history that has been lost,” said Salvatore Calabrese, the cognac expert and the proprietor of the rare cognac. There wouldn’t be any insurance coverage for a bottle which had been opened.

Crazy Englishmen! They were too polite and gentlemanly to make mincemeat that night. They forgave the customer.

But if this was one crazy accident, the tragedy that happened in Newyork was something that William Sokolin asked for.

Or why should at a dinner at Four Seasons, on a Sunday night hosted to herald the arrival of 1986 Bordeaux vintage Sokolin decided to flaunt his private treasure? William Sokolin got all the attention he wanted, but he got it for reasons he couldn’t dare to imagine.

Sokolin had in his hand, as he arrived at the dinner, an irresistible bottle of wine, which the wine experts believe was once owned by Thomas Jefferson, the third President of the US and the principal author of Declaration of Independence.

All the limelight now fell on Sokolin and the bottle in his hand.

Sokolin believed he could sell this vintage bottle for a whopping ($519,750) (Rs. 2, 70, 27000/-). But today he was here at the Four Seasons not to sell it, “but it was a power play in a sense,” he later admitted. It was a rare opportunity for him to display his prized catch as almost all the wine experts in the country were there.

As he walked towards a metal-topped tray table, Sokolin accidentally had his bottle knocked against it making two holes in the smoky green bottle. Red wine gushed out, as Sokolin and other guests at the party watched aghast, soaking the rug.

It was sacrilege of the worst order; a moment of thundering typhoons, billions of blue blistering barnacles!!!

Sokolin hurried out, holding the broken bottle, with red-brown splotches like dried blood trailing him.

But before that he put the bottle away for a few seconds to retrieve his coat.

And that was enough time for three people to put their fingers through the shards to know what Jefferson had tasted two centuries ago.