You are here: Home » Featured » And Quiet flows the Kallar

And Quiet flows the Kallar

Every time I want to unwind without going far from my city Trivandrum, I walk along a private bridge across a river and disappear. A metallic door slams shut behind me. The voice is so reassuring; I feel a mundane life and a demanding society left lurching on the other end of the river, suddenly losing me. 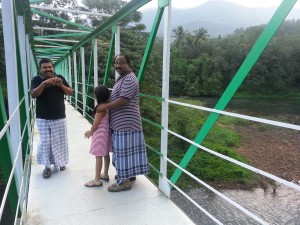 The hideout, River County resort is on the way to Ponmudi: twelve kilometers short of the tourist centre, at the opposite bank of the Kallar river.

Three weeks ago when I came to the resort with my friends, the river was so lean that its fragmented bones, big white boulders were out basking in the sun. We walked up to the middle of the river without getting our feet wet.

But when I came again today morning now with my huge family of 14 – with cousins, aunts, mother, wife, daughter and uncle – not even the remote relics of a serene river that I promised them was left.

It was pouring heavily.

Kallar had turned into a frightening slab of water that was sweeping down at a mad pace. Talk louder, I can’t hear you. Kallar could be silent at times; but in moods like this you must hear the virago firing in all cylinders. It all depends on the rain she takes.

If you take treachery away, Kallar loses her essence, her soul.

One minute you see her trim, serene and mellifluous, at the next she turns ravenous, ghastly and plump, breaking promises, now gnawing at, rooting up big trees off the shoulders of the stream.

Every tragic story with reference to Kallar has one plot:

At the last minute you’d get a warning from an alarmed local who somehow has mystically sensed rain up the mountain. He implores the travelers to get off the water 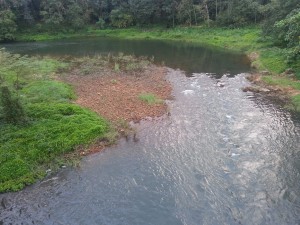 instantly. They ignore and laugh at him. The clear river gets muddied all of a sudden. A gigantic slab of water is now only seconds away from the hapless victims.

One of my friends who came to Kallar with his classmates told me over a drink how they ignored this warning, decades ago. When he came to the point when he had to shake away a girl from his foot, as he himself was clinging on to his life by the root of a tree, my friend almost wept.

“I wouldn’t have survived had I helped,” his voice broke.

Nine students of Trivandrum Dental College died that day – Kallar’s biggest manhunt recorded in history. “Some of them were lovers,” he sighed and emptied his glass of brandy in one go, his eyes tightly shut.

Today I came here not to change the statistics of people who drowned here. I just want to cross that bridge and walk into a beautiful resort in the middle of a meadow.

The rain was still feeding the apocalypse beneath the sturdy bridge, as we filed across, one by one.

At the other end of the bridge a flight of steps lead down to the river, the resort’s private bathing area. The spot where I had stood with my friends only last week was now at the middle of the torrent. No boulders now jutted out from the water.

This is the River County resort at Kallar. 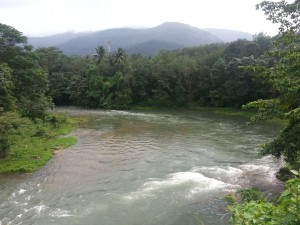 A large stretch of green, now glistening in the rain had in its epicentre, a traditional building, double-storeyed, loud with the red paint and tiled roof. A wet swing welcomed the children in us. The trees well dispersed in the expanse promised to keep the sun at bay even if it is March.

Why should I think about a sun when it is pouring like this!

Inside there are nine rooms, all facing an indoor swimming pool that caters to children and those men who like to dip only their feet. The rooms are large enough for two, but get a little cramped if you try to tuck in a third. Cleanliness, I noticed, is one of the high points. Many of us walk straight into toilet with beady eyes when we are asked to inspect a hotel room before we could check in. You wouldn’t find a smudge here.

The food, that followed, was awesome. Effort and sincerity went into them in ample amount.

As it was raining, the hotel staff took us to a large shed outside at night, where we, children (I am a child of 40) played musical chairs with aunts and uncle. (Well, that’s my family). The smell of chicken wafted up from the barbecue, the blabbering river kept its high wail throughout the night. We climbed down the years running in circles, dropping out at the nick of time to have a quickie from the cocktail table.

The night was young, but we were already peering down barren bottles. “Where’d all the brandy gone?” The men now ran around the chairs with accusing eyes at others. 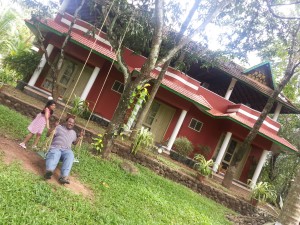 True, the resort staff cannot keep any stuff in their custody, but still they could at least direct us to the point. Pretty soon with one of the resort boys, the van by which we came, sped down the road to Vithura town (10 kms away), with its headlight piercing the night. More life saving liquid arrived to keep the rain-cold away.

Coffee at 11, we wished, we got coffee at 11. Eggs could be good with brandy, a cousin thought aloud and a clutch of boiled eggs arrived. We felt like kings with caring staff ready to carry out our wishes.

Night. I woke up at the moment I felt like sinking deep into Kallar, slowly. The music of early morning Kallar. She had once again become tranquil and tasteful. Beckoning you.

4 Responses to And Quiet flows the Kallar