You are here: Home » Featured » All for chicken

Sometimes all the money in the world cannot bring the simple things you wish for.

I tried every other trick I had in my kitty.

And learned that hitting a jackpot, marrying the girl of your heart, getting separated from the wrong one, building the dream home, going to the moon are all easier. 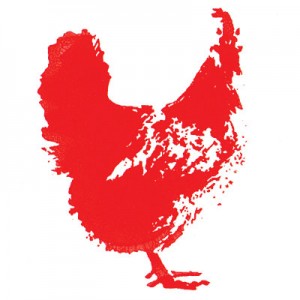 First I thought it could be something wrong with me. So I started to work on my side.

I held my plate with a 10 degree slant to the north. I tipped it to the east with all its oriental deities in my mind, tilted it to the west to reflect its culture, raised it above my head, lowered it ground level. Once I surreptitiously tried it even at my crotch level.

I am not jealous, but it pained me a bit when I saw others in the queue get gargantuan thighs of the bird, leaving just the bony bridge and half-a-tail (which connected the WWF thighs) for me.

Some justice! I almost became an atheist last year after a series of failed attempts in marriage parties.

You want to know why I grumble over such matters?  You must, you must see the kind of pieces I used to get in order to understand my feelings. I will let my plate do the talking.

Look at it now.

See, this is spleen, and the black ones lungs, black because of nicotine. Have you seen chicken kidneys? Come, there is a dozen in my plate. The peas you see are not peas but stones. This is chicken liver, sorry, not so cute because of cirrhosis. These are beaks, gouged eyes, feathers, fingers and knee caps of the fowl. (Even a chicken would be too embarrassed to admit that the parts I get belong to them). Ayyo, sorry, I forgot to introduce the frequent flyer in my plate – manga (I don’t know what they call it in English).

That is sphincter muscle you are ogling at now, the business end of a cock’s alimentary canal. Yeah, it is still warm, tense and all warped up. The bird could have sincerely tried to relieve himself at those final moments before succumbing to constipation.

Friends, you have now met almost all the regular season tricket holding commuters of my plate in wedding parties. But I miss someone. Oops, I forgot to introduce the skinny chicken necks. They form half the cattle class.

Ask me: Why did the chicken cross the road?

Pat comes my answer: Because it has more than one neck to spare. I will prove it with the sheer number of them in my plate. 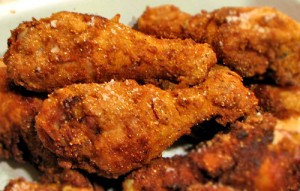 When all normal methods to get elite chicken pieces failed I admit, I resorted to bizarre techniques.

I used to hold my plate on my back, and suddenly thrust it out as if it was a hold up. I produced it in slow motion. I brandished iPhone, Samsung Tab and so many other style statements to attract buxom pieces of chicken.

But still no change of status. Good chicken pieces continued to be as mysterious and elusive like those fairytale characters, Rapunzel and Cinderella. It demanded a lot of blind faith to continue in the path, waiting for Godot.

This writer had faith but you don’t know how nervous a man could get as he continued to wait, holding his plate awkwardly at a bearer who had already served him his quota of bones and turned his attention to the next person in the queue.

The air would be electric with chicken curry, hope, tension, silent prayer and embarrassment. No first moves. Both of us would just stand there frozen like statues, barely breathing. I with my hungry plate, he with his big spoon now dipped deep in curry – two great tableau artists separated by chicken.

A psychological battle would ensue.

I would continue to stand there, but now looking elsewhere so as to detach myself from that alien hand, sprouting from my shoulder, holding the plate, and doing strange things, I was not responsible to. (That posture was handy as I could later chide my arm for misbehaving if something went wrong). But look at that devil of a bearer! He would mimic the same game, looking elsewhere purposefully until I accept defeat, pull my weapon back and retire to my seat of a tombstone.

His damn spoon would rather die in the scalding chicken curry than resurface to give relief to my pathetic plate.

I got almost mad with it in the long run. One night, I woke my wife up by biting deep into her arms. She threw me a fire of a glance when I told her it was only chicken and nothing else in my mind.

But then it ended last week, when I attended a party. When he served me two big pieces of chicken, I thought I was once again going to bite my wife. But no, I pinched the chicken and found it was not a dream.

Could it be a mistake? I looked at the man in uniform, caught his eyes and guided them to the mistake he had made on my plate. He smiled.

(Tears rolled down my cheeks)

Even after I came back to my table, I did not know what to do with those pieces. My eyes were flooding. Where to begin now?

(‘Freekick Awesome’ is inspired by the writer Neil Pasricha who wrote the wonderful book ‘Awesome’. He talks about the little joys of life we experience and forget the very next moment. This column helps you relive them).

Manu has written 297 stories in Rum, Road & Ravings. You can read all posts by Manu here.
by Manu |
12 Comments |
Featured, Freekick Awesome

12 Responses to All for chicken