You are here: Home » Featured » My Close Encounters with Death

My Close Encounters with Death 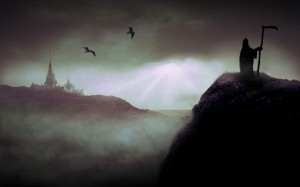 We had no other job that evening.

So we both waited patiently for the other to make the first move.

I clung myself tightly to the highest rung of that spiked iron pole at the top of Peeru hills. That was the maximum I could help as the pole abruptly tapered out into a blue sky just above my head.

When I looked down I saw the wild buffalo eagerly waiting for me at the bottom.

Indeed I yelled for help. But the blue mountains around me listened, and promptly returned my scream undelivered.

I am going to die, I felt my heart thumping against my ribcage. Sweat trickled down profusely down my face; I needed some water, but the bottle I brought was lying behind the buffalo-in-rage. I tried to blink my eyes hard so as to wake up from my cozy bed back at home with one arm thrown over my wife instead of this frigid iron rod. 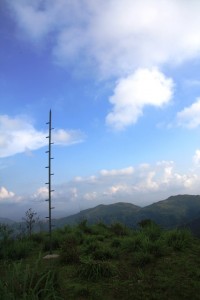 No, this was no nightmare to wake up from.

Tendons stood out on my neck as I wound my hands tighter around the pole. But I knew it would go weak very soon. Nobody would come here to help me in this wilderness. The rough spikes of the rod were already biting into my fingers.

The horns of a buffalo could be infinitely more painful than this.

Then strangely I felt the pounding of my heart give away to a lightness.

There were no more fluttering butterflies in my stomach, I felt secure in the certainty of a long sleep that had come searching just for me. I was even shocked to catch myself looking down with half a smile at the buffalo who was waiting for me.

I was moved by a crystalline clarity in its motive.

I was going to die, and this sudden change I felt inside my heart could be that sense of tranquility which washes over our souls just before our death, I imagined. I calmly flipped out my camera from my cloth bag which still hung down like a pendulum from my shoulder and took the last pics meditatively.

What a different man I was a few hours back when I strutted along the jungle road that led to the Peeru hills! The hotel staff had asked whether I wanted somebody to accompany me. “ Ha.. ha… You are asking me! I am a travel writer for the last 15 years. I travel alone,” I dismissed the offer rather smugly. 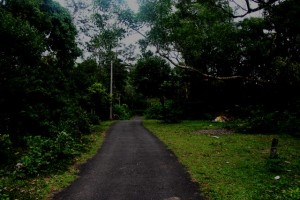 It is only three kilometers from Kuttikkanam junction to reach the base of Peeru hills where there is a mausoleum of Saint Peeru. Walkable distance.

I walked. Alone. The deserted jungle road was inviting, the shades were cold, and the wind was regaling me with new tales every time it wafted.

As I reached the mausoleum, I saw the formidable hill rising from its backyard, the Peeru hill. I walked gingerly up lugging my camera bag, whistling a song. Half an hour later, when I reached the top the cold wind had turned offensive and loud. Behind me far below, the mausoleum could now be dismissed with my little finger, I tried and smiled.

I was now on level with the mountains and the clouds.

Hardly a few metres of uneven ground formed the top of the hill. At the exact centre of the plateau I saw a long pole erected for the tourists to climb if they wanted to have a better view of the valley. I shook it. The pole wobbled inside my hand. Extremely dangerous if somebody tries to get on to the top, I told myself. 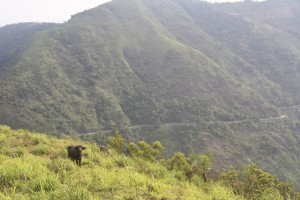 I took a few shots of the faint outline of Peerumade town deep below the valley with the camera, and was about to go my way down when I felt a movement behind me among the bushes. I swiveled my head and caught a glimpse of a calf grazing on the shrubs. I smiled again.

There arose from the bushes, a mammoth buffalo! 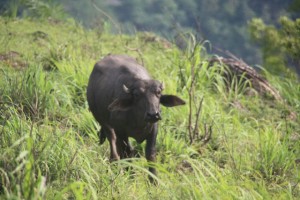 The buffalo took a few rasping breaths. And took one step forward. And stared again. Then it ducked a bit and suddenly hurtled its gigantic body at me as a missile. A terrible growl escaped its deep mouth as it rumbled towards me in one swift motion raising gouts of dirt and grass behind it.

A scream pierced the calm air. For a moment I thought I was watching a movie. Then I swung around and saw the frail rod at a distance.

It wouldn’t work, I knew. But the next moment I was swinging crazily at the top of the wonky iron ladder. It swayed around with me wildly, but it held to the ground, even as the buffalo butted into it many times with its head. I had never seen such fury in an animal.

The long waiting thus began. I, at the top and the beast at the foot of the long pole. 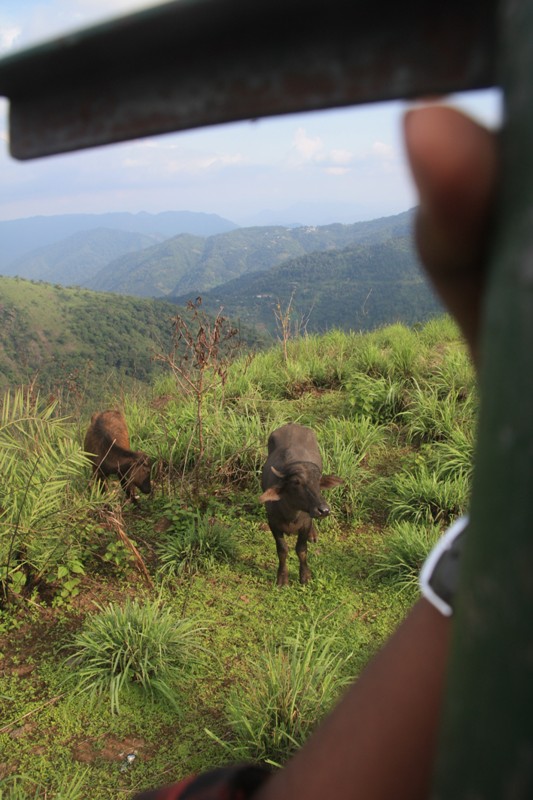 It was then that the sense of resignation came over me. I knew the game wouldn’t last, I’d slip down and the beast would gore me to death. I thought about my daughter Ammu, my wife and amma, my students, my friends; I imagined how each one would react to the tragic news. In a few years I would be forgotten forever, I smiled again. This time I didn’t understand why my eyes became wet.

When it was almost half an hour, some thought could’ve suddenly struck the beast. It blinked, looked away, drooped its head, turned back, walked calmly towards the bushes with its calf and went down the hill as if I never happened in their life.

I slid down the pole, and slumped on the ground. I don’t know how much time I lay there in a trance.

But my ordeal for the day was not over yet.

The way back to the hotel was not an easy one; it was late; the sun was on a hurry going down. A thick pall of darkness had already descended over the winding jungle path.

The chills of the bovine encounter hadn’t subsided in my heart. The narcotizing silence of the jungle (strangely, no cicadas) had left me pondering about life and death even as I walked.

Suddenly piercing the calm of the woods, my mobile alarm went off.

I was startled out off my reverie; I stood in the middle of the dirt path, frozen, with one leg still hovering on the air. I had to let it fall, but I couldn’t. There…

(Those days I used to wake up at 6am and so had set the alarm(The alarm is a devotional song that came with the mobile phone) accordingly. But today, as I came back from the Peeru hills it went off at the wrong 6 O’ clock, in the evening. I was sure nobody had tweaked with it. But then how! ). 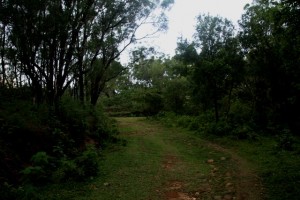 I stood there frozen with one leg hovering over the ground, no… over a snake! Yes! SNAKE!

There was a snake, about the size of my forearm gently sliding across the heavily graveled ground just in front of me. Suddenly it stopped. Sensing danger, it turned swiftly, reared its head, inflated its hood and hissed at me. A cobra!

I threw myself back and fell on the road. I was away from its striking distance. But a cold shiver went down my spine, as I gathered myself up. If that alarm hadn’t gone off at the wrong time, I would definitely have put my foot on it.

There wasn’t a human being miles around when it happened. A help was far far away.

Almost a year has gone since this happened. I still don’t know how all those terrible things happened to me on a single day. What could’ve saved me?

Perhaps… I was marked for slaughter on another day.

4 Responses to My Close Encounters with Death