You are here: Home » Featured » A sexy witch in short skirt, A clipper ship and The Cutty Sark

A sexy witch in short skirt, A clipper ship and The Cutty Sark

“Weel Done. Cutty-Sark. And in an instant all was dark.”

Tam’ Shanter was on his way home from an inn all drunk. He stopped midway. His curiosity was evoked when Tam heard strange noises trickling out from a nearby church. Nosy guy he was. Now drunken too. He entered the holy premises only to find a bare-breasted witch dancing in a voluptuous cutty-sark, a short skirt.

An excited Tam could not hold out for long. He cried out: “Weel done Cutty-Sark.”

And in an instant all was dark.

What followed was high drama down the road with the witch chasing our poor Tam to clean up the witness. Fi 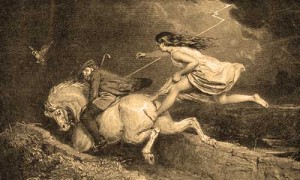 nally our hero managed to escape but not without paying the price for seeing what was taboo to human eyes. The witch reached forward, snatched and ripped the grey tail of his poor pony on which Tam rode off.

Robert Burns in his 1791 poem, ‘Tam o’ Shanter’ thus immortalized Cutty-Sark, the sexy witch in short-skirt. And that was not the last we would see her in history. The witch came back to haunt the 19th Century as the figurehead of a British Clipper ship, named after her.

Inspired by the prowess and the agility of the witch, her mascot and her muse, the clipper ship was one of the fastest things moving over water in the 19th century. On the hull was depicted Cutty-Sark, still holding that tuft of grey hair, that pony’s tail in her hand, the only thing she could yank off from Tam o’ Shanter.

Cutty-Sark was a masterpiece of the ship manufacture industry; it caught the imagination of the youth of the times.

So in 1923, when three men sat in the parlor of 3. St James Street in London, and decided to take the spirit in 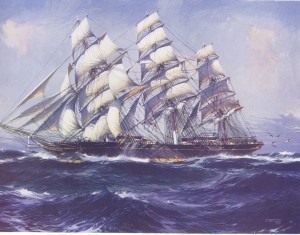 dustry head on they were not asking around for a name for their new product. One of the men at the lunch was James McBey, a sailor and artist. He knew what the name ‘Cutty Sark’ would do even when it was taken off the water. Incidentally the famous clipper ship had also homed recently after its long service in the ocean.

So Cutty-Sark was in very much in the headlines; the name was ringing in the background when the three men sat down that day for lunch.

McBey pulled out a napkin from the table and drew a rough picture of the ship as it would appear on the bottle of whisky they would soon launch. Francis Berry and Hugh Rudd, who were already in the spirit business, immediately realized this would be dynamite. To peg it into a different class McBey named the new drink, ‘Scots’ rather than the common ‘Scotch’.

So what is the deal?

The US was still reeling under prohibition at the turn of the Century. But word was already in the air that the ban would soon be lifted. Good news! The new circumstances would leave the wine and cocktail clientele in the US aspiring for a promotion. They would look out to Scotland.

The dark, heavy whiskies that came from Scotland during the times would hardly live up to the sensitive palates of the New World finetuned to wines, they reasoned. If you add a lot of caramel to darken a drink the subtle flavo 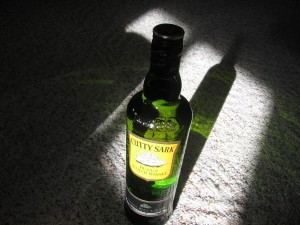 urs of whisky would shy away from expressing their subtle notes. They would not come after the taste buds.

Moreover, Americans by that time had grown a taste for cocktails. Anything heavy would run roughshod over all the mild ingredients in Cocktail, spoiling the symphony.

The Rudd bros. and McBey now exchanged smiles over their lunch.

Blend the finest whiskies. Add little caramel. If you could bottle the natural pale colour of whisky without doping it with artificial colours you have the wine bibbers and cocktail lovers corked in with the new drink. Simple thinking. Risky too.

Cutty Sark was launched to immediate international acclaim. The idea of going light became a bumper hit in the US. 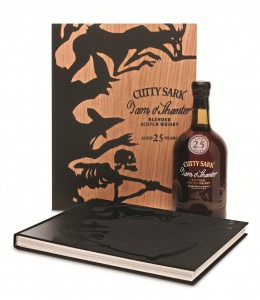 The company claims that the drink became a rage in such a short time that it gave rise to the English expression, ‘the real McCoy’ (now a synonym for integrity and authenticity) during the prohibition. Cutty was the preferred maal of Captain Bill MacCoy, the legendary smuggler and teetotal. He bootlegged it across the Atlantic.

Apart from bringing out a series of successful whiskeys of different ages, Cutty Sark fell back recently on the folklore from which its name was born. If you are lucky you will hold one of the 5000 limited edition bottles of  25-year old Cutty Sark Tam o’ Shanter in your hand and appreciate the depiction of the famous chase scene envisioned by Robert Burns.

The witch chasing Tam all around the bottle!

This distinctly darker and wilder variety comes with a book with over 50 illustrated scenes depicted by the legendary figurative painter, Alexander Goudie.

Another reason to go gaga over the sensuous short skirt.

One Response to A sexy witch in short skirt, A clipper ship and The Cutty Sark