You are here: Home » Featured » A rendezvous with a Kovilakam

A rendezvous with a Kovilakam 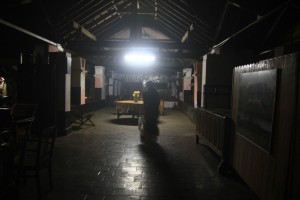 Suddenly I want to know how my daughter reacts to this, how skewed the corner of her mouth is, and how dark her cheeks have turned into. I turn and find that I was wrong. Instead of the customary sullenness I catch an eager light flashing across her wide eyes. Must do something. I call her by my side just to bail myself out from an inevitable tragedy.

“You don’t understand. This will take quite some time. You’d be bored to death. Go to our room and relax.”
“No, I want to stay. I want to listen.”
“But!”
Ammu dismisses my objection with a flick of her head, breaks camp and strides back to her mother.

“Fine, if you are interested, we’ll talk once you get back from the temple,” says CK Ravivarma, the ‘aaram thampuran’ of 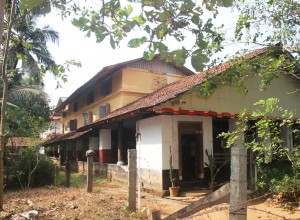 Chirakkal palace and my host at Nilambur Kovilakam, (He is married into this Kovilakam) where we have checked in as guests for the night.

Madhu, my friend and husband of Sreevidya(daughter of Chirakkal Ravivarma who has just promised us a long chat on the history of the Kovilakam in the evening), who together are running the home stay in the Kovilakam, earlier had taken us for a long and refreshing walk to the riverside. We walked with an image in our mind. Madhu had promised us a wonderful sight of tribal people crossing the Chaliyar river in long boats after work. We didn’t know as we trudged through the dirt track bordering a forest in the failing light, that the water would play a dampener at the river. See, there was not enough depth for even a paper boat to float around, not to menti0n about the serious one. It was so shallow that we had to watch with heavy hearts, men fording the river with their mundus hitched up their knees. 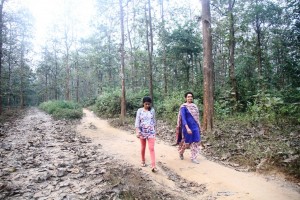 ng for us (Nonveg is taboo in the Kovilakam). It was then that Madhu suggested visiting the family temple to watch Vilakku.

Where the premises of the Kovilakam end, Vettakkorumakan temple, run by the royal family begins.

We saunter around the ancient building, treading softly through those flat stones studded intermittently on the ground; the ochre walls of the holy premises, pockmarked, crumbling, look so ancient that they seem to hum a ditty, remote yet strangely nostalgic to my ears. Have I been here before!

Up on the towering stone lamp (kalvilakku) at the front of the temple, a man precariously balances himself on the highest rung of a ladder. A few rungs below perch another, and down on the ground a third, who passes wick and oil all the way up to the top – from this distance they all look like dark paper-cut figures, without hearts or faces; bodies frozen, only their hands mechanically go up and down, mechanically, mobilizing wicks and oil from the ground to the sky. Ah, now I catch those beautiful ladies in set saree and young girls in garish full-skirts and blouses, with sandal paste adorning their foreheads and garlands of jasmine flowers, their hair, quietly ladling oil into those black little troughs that run along the walls of the temple. A few girls engage themselves in positioning the wicks with such concentration that they’ve almost stopped breathing and now pucker their lips, as they diligently tease those slender twists of yarn from the tiny troughs of oil. See, how they rub the grimed fingers on the lush hair at the back of their heads, but only to get them soiled again, tugging at the next white tongue coiled inside the dark oily mouth. All village is here for the evening, lighting the lamps. I pause at the door and shut my eyes, with folded hands – m 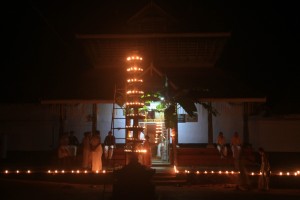 y infallible method to gauge the spiritual quotient of a temple. The air hugging me closely is soaked with the aroma of jasmine, sandal, oil, fire, ash, smoke, rose water, tinkle of bangles as arms recoil to rub off oil in lush hair, sporadic peals of temple bells, prayers, songs, and the feathery red of gloam that coats my closed eyelids. The squiggles of colours, the redolence, voices, oh, how they run together and slosh down into my heart, leaving me quivering in my prayers.

As I open my eyes I see in the same feathery red of the evening sun, a gash, a long bruise across the door of the temple. “What is that?” My wife asks. I shrug. The whole temple which is now ablaze like the Milky Way flickers and dances with the breeze.

“That half-broken door you saw goes a long way back, right to the days of Moppila riot,” says Ravivarma as we settle down opposite him at night after we came back from the temple. His grey hair glistens in the dark. Ammu leans forward in her chair, supporting her chin on her arm; she wants to see the glint in the story-teller’s eyes (deep in my heart I feel a little jealous of the old man for the way he commands attention from my girl) as he talks. A few tube lights here and there in the sprawling hall – where darkness rules with an iron hand in every corner, nooks and nuances – can never aspire to dispel the myths, hoary legends and bloodcurdling stories shrouding every little object that hangs from the mildewed wall around me.

Ravivarma screws his eyes shut for a moment to heave out a painful memory from the past. “What was I telling you? Yeah, the Moppila riot. Rioters one night reached the temple and tried to break in. But they failed. All they could do was to inflict that gash on the door. We believe that it is the power of Vettakkorumakan which protected us that night.”

The rulers of Nilambur Kovilakam, who were the chieftains of Kozhikode Zamorin, had no other way back then, especially with Tipu Sultan looming large in the background; they left Nilambur, seeking asylum in the state of Sakthan Thampuran. But after some time they found it hard surviving in a different kingdom. At one point, the family which 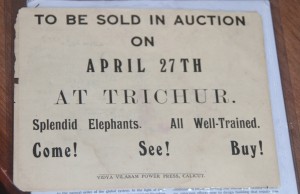 owned more than One lakh 27000 acres in the country in its heydays stared down the barrel, looking for sustenance. “ Mind it. You take the school, hospitals and any other institutes in Nilambur, they were all contributed by the Kovilakam.” Past glories hardly speak up for the miseries of the present.

One fine morning, an advertisement came out – any buyers out there for a couple of elephants? Royal pachyderms, who served Nilambur kovilakam were put for auction.  Ravivarma rummages through an archaic chest to show us the advertisement that came.

We could hardly breathe as he walks us back through the time, along the traditional practices, strange customs and myths shrouding the origin of the temple and the Kovilakam, where we are now sitting, listening, wondering. I look around, my daughter too, our eyes meet only to slink apart in hurry. From the darkness I now see figures – rulers and gods –  gathering up, looking at themselves and me with surprise, and then with a jolt, begin to shuffle around us in the hall in silence as Ravivarma fervently evokes them through his accounts. I can see from her face, Ammu has also begun seeing things in my line. Late that night after dinner I catch her walking by a platform which is at one corner of the hall, running her slender fingers along its elevated floor. There is a beautiful portrait of Yashoda scolding Lord Krishna near it. I know what’s in her mind. She wants to feel w 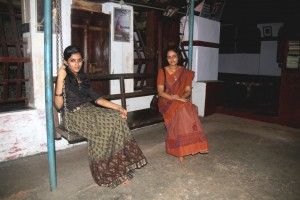 ith her fingers the vibrations of an age old practice – ‘kettukalyanam’ – where women in the family, including newborns were ‘married off’ on mass as a ritual. Those marriages were conducted on the very platform my daughter caresses now. She wants to feel history with her fingers. “Our ancestors believed that if a woman was destined to become a widow in future, this ritualistic marriage would wash away that fate forever, for in most cases, the bridegrooms would be men who were very old, teetering towards their end. With their demises, the curses would wither away. After the ritual marriage, the bridegrooms went back to their homes leaving their ‘ritualistic’ wives forever.”

An evening at Kovilakam is not to be missed at any cost if you are anywhere near Nilambur.

Early morning, next day, Ravivarma takes me for a walk along the banks of Chaliyar river that flows by the temple. We spend an hour talking, watching the birds dip and soar from the thick white haze that hugs the water. Then we remain silent for a while. I sigh.Time to go.

For every good dream, there is a time to wake up. 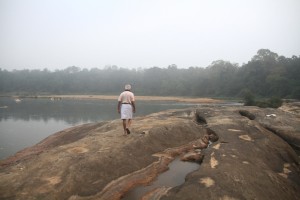 Now it is time for me to wake up from this magical place that is tucked inside the folds of history, it is time to shuffle off the vestiges of fables and myths, it is time to trudge back to the mundane world of timetables, deadlines and in my case assignments and test papers. Half-an-hour later, after a sumptuous breakfast we say goodbye to the Kovilakam, the Chaliyar, and to the temple that carries a bruise on its face, and walk, pensively.

She doesn’t reply, but I know, she’s smiling with the other side of her face. She would not admit in fear of her father tagging her along in his future journeys too, which she hates like hell. But this, I know, just this one, even though you won’t tell me dear, I know. I know.  I never saw your eyes sparkle the way it did yesterday. (She later confides to her mother, how deeply tales from history stir her, how distant she traveled in a single night). 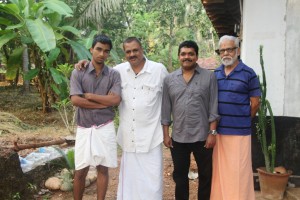 With Chirakkal Ravivarma, Madhu and Aswin

I look back once again at the gates of Kovilakam, the large building which has begun to come off, looms large in the background. I have learned how much hard they struggle to maintain this rich piece of history intact, with mostly the money they earn from tourists. This is the family which owned One lakh 27000 acres of land – forests, mountains and rivers – only a century ago.

Ravivarma, Madhu, and his son Aswin, they are still waving their hands, bidding us adieu. “I’ll come back again,” I mumble to myself as I lift my hand their way, “with my wife and daughter.”

Then I turn back to the present.

Manu has written 297 stories in Rum, Road & Ravings. You can read all posts by Manu here.
by Manu |
6 Comments |
Featured, The roads less travelled

6 Responses to A rendezvous with a Kovilakam