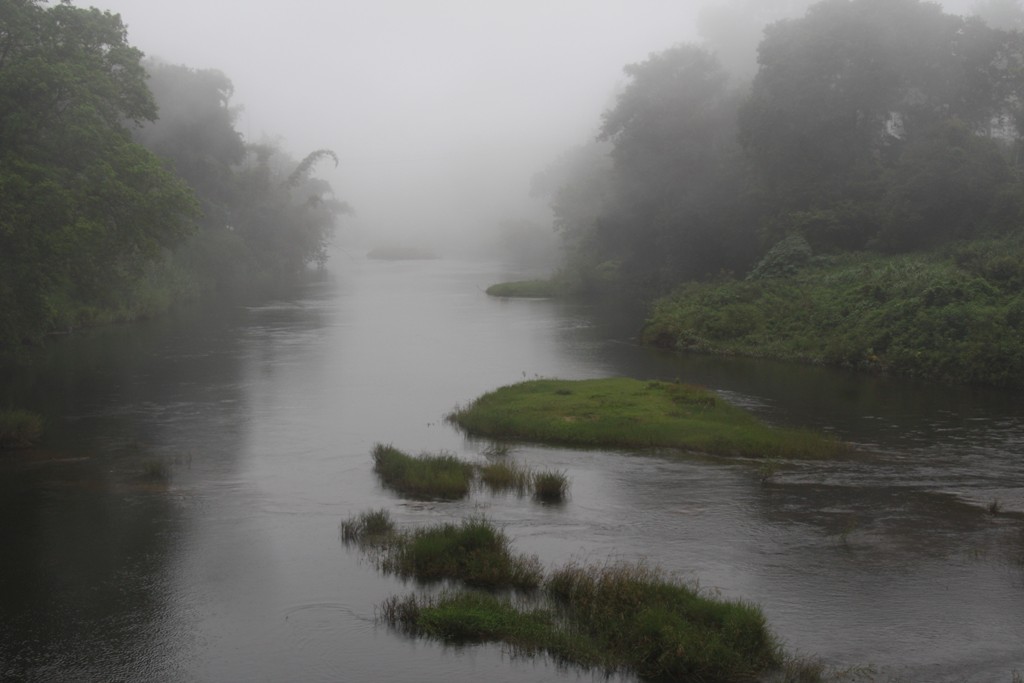 Won’t you sit here with me by the brook for a minute and listen?

If I could choose only one voice which lingers beyond death, I would go with a babbling river tinning in my ears. Ah, its music! The water which trips from stone to stone has a soothing timbre which tingles in the wounds of a soul. Other human philosophies and gods could only baulk and stand outside by the door. 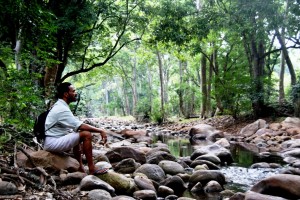 Listen. Every time you let a river flow by without you sitting on its banks, you break an appointment with your soul. You are afraid to pick a call.

Come to the river in a jungle. You must see how the wind comes in cat’s paw, hardly tapping the glinting surface, but gathering the sighs swirling up from the water with its soft fingers to spray the cold and naughty vapour at you, idling on the bank.

Sit with me by the brook and I’ll show you how you’d dissolve wave by wave into the river, just by looking into it. You’d leave your worries on the shade of a sprawling tree and slowly wind your way through the deep woods after a whiff or an instinct of an ocean.

Catch a jungle brook in her many moods.

Walk along the bank, as the river shifts its gear, gathers momentum, dashes forth madly until it pitches its head against the rocks deep below bursting into a thousand shiny beads (Don’t worry, they’d soon run together to become the river again). 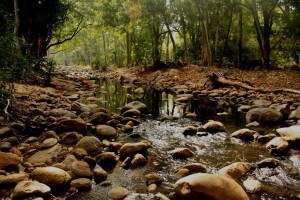 Stop where the fervent river suddenly loses steam and halts for a while. See how the bubbly water vacillates, spins around as if to pick a dropped memory, thinks it over and over again in eddies, and then doubles back on its course.

Ah, the course. What did the bard say? The course of true love never did run smooth, right?

So you must wait patiently when the river thins out into a thread in midcourse and then almost into a hunch,  dragging its heavy feet under the dry, gravelly earth with a death rattle until a neighborhood tributary feeding a herd of elephants suddenly picks the distress signal from the air and gushes forth to nourish the dying river at the next turn.

Sit by me here where the water freezes into a frame. 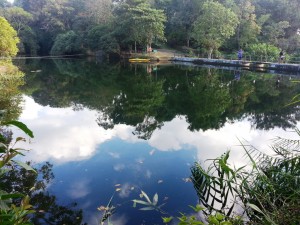 See how the river holds its breath like a crafty fisherman and lays its glassy net meticulously on the earth to trap a skein of birds or a few shreds of white cotton skudding along the blue sky. Hush! Even the breeze which is as slight as breath on silk falls silent waiting for the prey.

I’ve spent hours on the banks of such brooks whenever I go for a jungle trek.

Every little rock buffed by the crystal water has a long story to tell; I have only deep reverence. We’d learn how insignificant we are against the river which has been meandering through the woods for centuries.

Hey, leave it. Come, let’s touch the river and wash our worries away.

Dip your feet in the icy water. Slowly. One foot at a time. Hold me tight. The moment your toe touches the element, the brook would leap through the limb like a hungry flame, cold and sudden. It’d give you such a shiver that every single organ inside rattles violently against the vertebral cage for a second. Now close your eyes.  Feel the tingle as a little school of fish swims in against the white pebbles to nibble at the soft skin between your fingers.

The river has touched you in return.

I have a memory etched deep in my heart. It happened long back. After an arduous trek through a jungle in Idukki we settled near a brook. Against the failing light my friends told me to follow them leaping from rock to rock to get to the middle of the river. But I lost my footing midway and fell on the water. My friends scooped me up before I drowned. 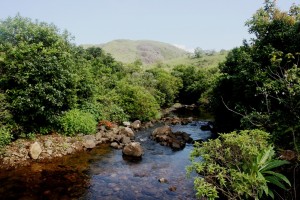 This is the memory.

Now as the last rafts of light vanished from the mountaintop I was standing on the rock in the middle of the river. Against me, looking into my eyes stood a cormorant on another rock. We both spread our arms wide to dry our loose cover against an unrelenting wind.

We stood there for what I felt like hours, looking into each other’s eyes.

Finally when it soared to the sky leaving us under a razor thin moon, I was still in a daze. None of us talked much. The drone of the river engulfed us through the night; the water glimmered in the lambent starlight. I don’t remember when I slept.

Early morning. An ethereal river waited outside to greet me as I woke up. I rubbed my eyes and looked again. Not a dream. I was but caught in the midst of an elaborate jungle tableau. The mist which billowed from the 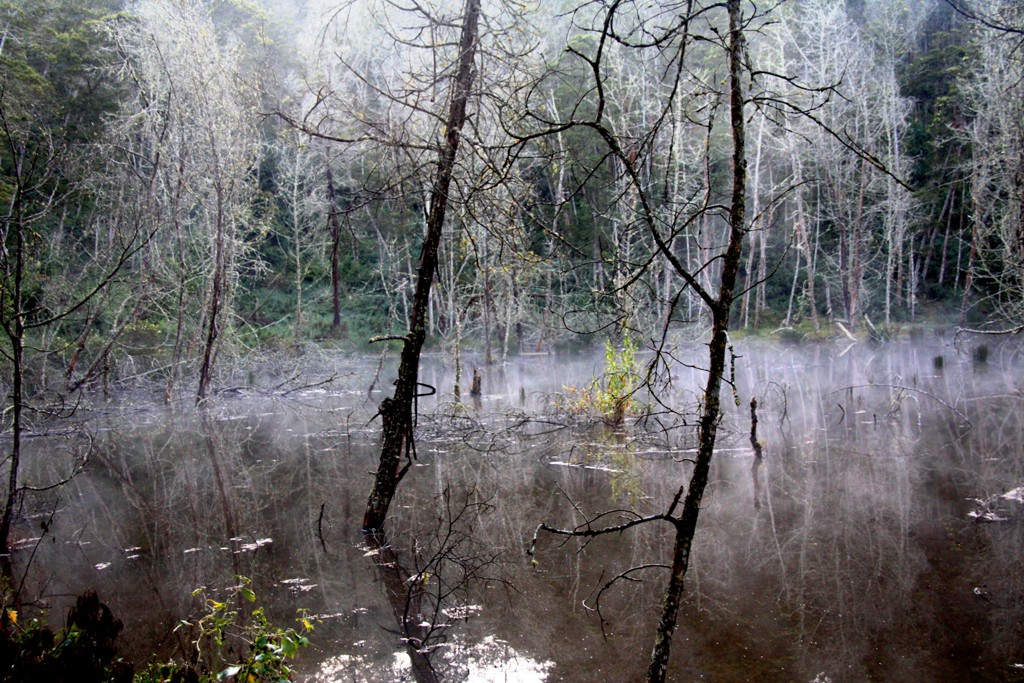 water hung above the river. See.

If this is earth what is a heaven for! In half-sleep I thought goddesses in the guise of swans would soon come, shed their feathers and take their bath.

What would happen if I steal one set of feathers, I wondered and smiled.

The mist that hung eerily above the still brook that morning could make the most fantastic vision I dared to raise, happen. So I lay there waiting for my swans to come.

Manu has written 297 stories in Rum, Road & Ravings. You can read all posts by Manu here.
by Manu |
6 Comments |
101 reasons to love Kerala, Featured